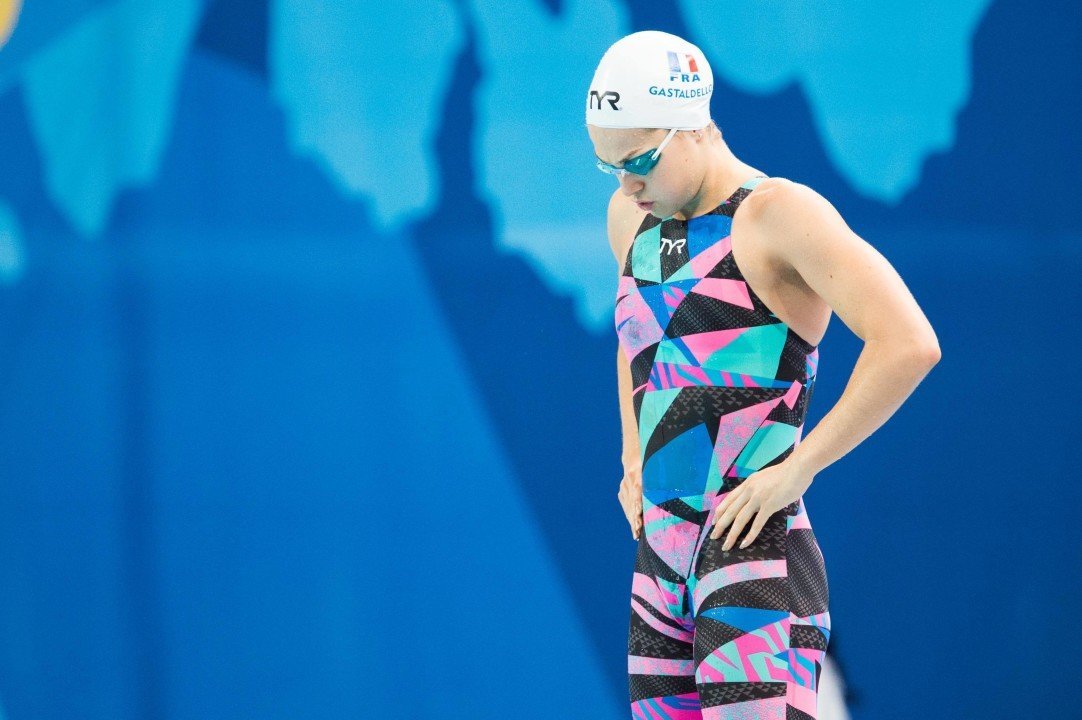 The action is beginning in Chartres, France as the country's greatest swimmers attempt to add their names to the 2021 Olympic roster. Current photo via Mike Lewis/Ola Vista Photography

It’s night 1 of racing at the 2021 French Elite Swimming Championships and France’s fastest swimmer will be vying for a spot on the 2021 French Olympic team. There will be 6 individual events tonight beginning with the men’s 400 IM, followed by the women’s 100 fly, men’s 400 free, women’s 200 IM, and men’s 100 breast

Follow along here to keep track of the events and find out who has managed to nab a spot on the Olympic team.

After missing the event at the 2021 European Championships due to a sprained finger, Leon Marchand made his comeback here count and swim a 4:09.65 to annihilate his own French record in the event of 4:14.97. That’s a major improvement for Marchand who only set that record a few months ago in March.

The time is well under the 4:15.84 he needed to qualify for the Olympics, making Marchand the first official qualifier for the French Olympic team at this meet.

The swim for Marchand places him in the top 5 worldwide rankings for the event this season.

Marchand has now become the 3rd Olympian in his family as his father, Xavier Marchand swam at both the1996 and 2000 Olympics while his mother Céline Bonnet raced at the 1992 Games.

Marchand was, however, the only man to get under the Olympic qualifying standard as Emilien Mattenet swam a 4:17.50 for the silver medal while Jaouad Syoud hit a 4:19.02 for bronze.

Swedish swimmer Louise Hansson posted the fastest time in the women’s 100 butterfly final with a 57.05 to snag the gold medal. Hansson was a little bit over her PB in the event which sits at a 56.73 from earlier this year at the 2021 Stockholm Swim Open.

Hansson is qualified to race the 100 fly for Sweden at Tokyo 2020 and will be potentially heading up the event for her country if teammate Sarah Sjostrom is unable to enter due to her elbow injury.

Hansson recently medaled in the event at the 2021 European Championships with a 57.56 for bronze. There, France’s Marie Wattel took gold with a 57.37 to tie Greece’s Anna Ntountounaki.

Wattel swam alongside Hansson again tonight and was the second-fastest woman in a 57.88. Wattel will win gold as Hansson represents Sweden internationally. Wattel had already qualified for Tokyo in this event but got under the qualifying standard of 57.92 again.

Wattel’s teammates Beryl Gastaldello and Charlotte Bonnet were among those gunning for the second spot on the team in the event but neither were successful tonight. Gastaldello, who is currently qualified for Tokyo in the 100 free, swam a 58.33 for the silver medal while Bonnet took bronze in a 58.63.

Tunisia’s Ayoub Hafnaoui raced to victory in the men’s 400 freestyle final and hit a 3:46.16 which mark a new best time for him, improving upon the 3:47.79 he swam at the Monte Carlo stop of the 2021 Mare Nostrum swim series last month.

While Hafnaoui posted the top time of the night, gold went to the fastest Frenchman Joris Bouchaut who was a 3:47.37. That swim gets Bouchaut the gold medal but won’t be fast enough to book him a ticket to Tokyo as he trailed the qualifying standard of 3:46.78 by less than a second.

Bouchaut’s best time in the event heading into the meet was a 3:48.14 from earlier this year meaning that he hit a new lifetime PB. Bouchaut was joined on the podium by Logan Fontaine who swam a 3:48.75 for the silver medal and Marc-Antoine Olivier who was a 3:49.26 for bronze.

While Great Britain’s Candice Hall held onto the lead over the first half of the race, France’s Cyrielle Duhamel and Fantine Lesaffre both used their strong breaststroke legs to their advantage and managed to pull off a 1-2 finish.

Duhamel nabbed gold with a 2:11.57 while Lesaffre came in with a 2:12.47 for the silver medal. Both of those times are under the country’s Olympic qualifying standard of 2:12.56 in the event meaning the country will likely send both of them to represent France in Tokyo for the women’s 200 IM.

Duhamel’s swim was actually a new PB, improving upon the 2:12.12 that she recently posted at the 2021 European Swimming Championships in Budapest, Hungary. Lesaffre on the other hand was a bit over her best time in the event which sits at a 2:11.70 from French Nationals back in 2019.

In the men’s 100 breaststroke final 1st and 2nd place finishers, Theo Bussiere and Antoine Viquerat both improved upon their prelim times but neither of them got under the Olympic qualifying standard of 59.93.

Only one qualifier in the 400 free? Ha! What kind of a country would have that problem!

Ok guys I need to take a little bit of rest now.
I need to eat a little bit.
I’m still shocked by what Marchand did in the 400 IM.
The 400 IM is my favorite race.
I’m shocked!

Bussière wins the men’s 100 breast in 1.00.25.
Not enough to qualify in individual.
He will swim breaststroke in the medley relay.

Léon Marchand is the son of Xavier Marchand who took the 200 IM silver medal at 1998 worlds and Céline Bonnet who swam at Barcelona olympic games in 1992 in the 100 back, 200 IM, 400 IM and the medley relay. He’s also the nephew of Christophe Marchand who competed at 1988 and 1992 olympic games.
The apple does not fall far from the tree.

Why the commentators have a mask? I’m not sure they will survive after one week. It must be 60 °C in the pool.

What’s the point of having prelims qualifying times? Seems overly restrictive to me

To develop the habit of not sleeping in prelims.

A French peculiarity. I remind French Nats with severe minimum times to reach in every round. Sort of training to swim fast already in the heats