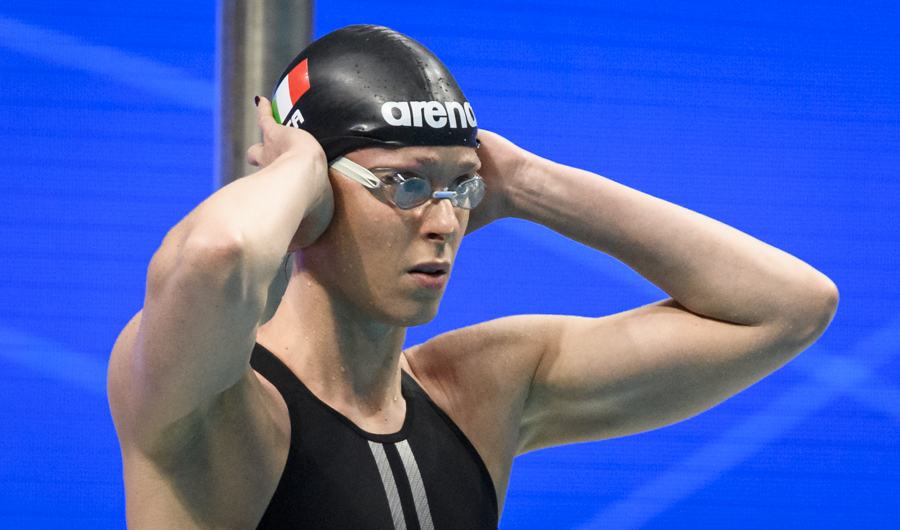 Day 3 of the European Championships will feature another exciting slate of events including the men’s 200 IM, women’s 200 butterfly, women’s 200 freestyle, and men’s 200 breaststroke.

The prelims session will feature 3 world record holders in the form of Katinka Hosszu in the 200 fly, Anton Chupkov in the 200 breast, and Federica Pellegrini in the 200 free. Hosszu already has one gold medal to her name during these Championships, having previously won the 400 IM.

Additionally, Kliment Kolesnikov will be back in action in the men’s 100 backstroke fresh on the heels of his world record-breaking performance in the 50 backstroke.

Follow along here for a live recap and analysis of all the action.

Joe Litchfield established a 1:58.79 in heat 3 of the men’s 200 IM to lead the men’s prelims so far with only 2 more heats to go. That’s actually just shy of Litchfield’s best time in the event of 1:57.74 which he set just a few months ago at the 2021 British Olympic Trials. Italy’s Alberto Razzetti and Spain’s Hugo Gonzalez followed Litchfield in the heat, hitting times of 1:58.90 and 1:58.99.

Defending European Champ Jeremy Desplanches overtook Litchfield as the leader with a 1:58.10 during heat 3. Desplanches won the event back in 2018 with a 1:57.04 but has been as fast as a 1:56.56 before. Max Litchfield and Hubert Kos also got into the wall with 1:58s that were quicker than Joe Litchfield in the 3rd heat, keeping them in consideration to move on.

Unlike heats 3 and 4 where 2 men got under 1:59, the 5th and final heat only saw 2 men under the mark as Duncan Scott and Laszlo Cseh went head to head. Ultimately Duncan Scott pulled out the heat win with a 1:58.14 which puts him at 2nd place in the prelims. Cseh hit a 1:58.46 for second place, trailing his own European record in the event of 1:55.18. Russia’s Andrei Zhilkin was also under 2 minutes to take 3rd in the final heat with a 1:58.46.

The Hungarian duo of Boglarka Kapas and world record holder Katinka Hosszu posted the quickest 2 times of the heats, taking the respective 1st place finished in heats 2 and 3. Kapas started with a 2:07.61, beating out Laura Stevens of Great Britain’s 2:09.15 and Italy’s Ilaria Cusinato who was a 2:10.15.

A solid race broke out during the 3rd of heat of the men’s 100 backstroke as 4 men were separated by only 0.42 seconds. Viktar Staselovich opened things up with a 54.55 from Belarus to take first place in the heat, followed by Joao Nogueira Costa from Portugal, while Thierry Bollin of Switzerland and Nicolas Garcia Saiz were 54.86 and 54.97, respectively.

Italy’s Thomas Ceccon was the first man of the session to crack 54, hitting a 53.43 to win heat 4 of the 100 backstroke. Ceccon has been quicker than this season, having posted a 52.84 PB back in December 2020. France’s Mewen Tomac was second in the heat with a 53.46 which will also be good enough to move on to the semi-finals. The Hungarian duo of Richard Bohus and Benedek Kovac went 3-4 in heat 3 with respective times of 54.17 and 54.29.

One day after his world record-breaking 50 backstroke swim, Kliment Kolesnikov rocketed to a 52.32 in the 100 backstroke, threatening the European and championship record of 52.11 set by France’s Camille Lacourt back in 2010. He also neared the Russian record of 52.12 held by Evgeny Rylov from earlier this year.

In the final heat, Russian record holder Rylov couldn’t quite match Kolesnikov’s speed and instead posted a 53.37. Trailing his own NR, that swim will easily be enough for Rylov to advance to the semi-finals. Greece’s Apostolos Christou will also advance, hitting a 53.47 to take second place in heat 6. That swim for Christou gets him close to his own PB of 53.23 from back in 2020 as well as the 2009 Greek record of 53.03 held by Aristeidis Grigoriadis.

In between Kolesnikov and Rylov’s 1st and 5th place prelim swims, Yohann Ndoye Brouard managed a 53.24 for second seed while 50 backstroke silver and bronze medalists Robert Glinta and Hugo Gonzalez took 3rd and 4th in a 53.26 and 53.37, respectively.

Towards the halfway point of the heats, Africa Zamorano Sanz leads the way for Spain with her 2:00.81 during heat 4. That was enough to beat out Silke Holkenborg‘s 2:01.12 for the Netherlands and Monique Olivier‘s for 2:01.28 for Luxembourg but may not be enough to advance as a number of swimmers will follow with sub-2:00s.

Charlotte Bonnet came into heat 5 for France with a 1:58.33 to take over the lead with only 2 more heats to go. That was a solid prelim swim for Bonnet but was a little bit over her 2018 European Championships gold medal-winning swim of 1:54.95. Connet will safely advance to the semis with that swim and will be gunning for a repeat Euros title. Italy’s Stefania Pirozzi was the only other woman in heat 5 to crack 2 minutes, swimming a 1:59.87 for second.

Great Britain’s Freya Anderson came into heat 6 looking to overtake Bonnet’s leading morning swim but wound up just shy with a 1:58.30. Like Bonnet, that’s a bit over her own PB, having posted a 1:56.06 in 2020. Anderson will advance to the semi-finals and will be hoping to unseat reigning champion, Bonnet. Belgium’s Valentine Dumont and Great Britain’s Lucy Hope also got under 2 minutes here, swimming a 1:59.09 and 1:59.67, respectively.

Czech record holder Barbora Seemanova won the final heat of the 200 freestyle prelims, notching a 1:58.25 to get within 2 seconds of her 1:56.96 national record from November 2020. That heat-winning swim required Seemanova to out-race world record holder Federica Pellegrini who was second in the heat with a 1:58.48 which is a decent amount over her 2009 world record of 1:52.98. Andi Murez and Janja Segel also got under 1:59 with their swims of 1:58.84 for Israel and 1:58.95 for Slovakia.

Great Britain’s 2 2021 Olympic qualifiers in the men’s 200 breaststroke swam during heat 3 of the event and were the first men of the session to crack 2:10. Ross Murdoch won the heat with a 2:09.60 while James Wilby established a 2:09.96 for second place. Both of them were a bit faster at the recent British Olympic Trials earlier this year where Wilby won the event with a 2:08.06 while Murdoch was a 2:08.98. Russia’s Aleksandr Zhigalov followed here with a 2:10.07 for third in the heat.

During the 4th heat of the men’s 200 breast, Arno Kamminga brought the field down to a 2:07.39. That’s a solid prelim swim for Kamminga but wasn’t quite as fast as his 2:06.85 from December 2020 which gave him a new national record for the Netherlands. Finnish swimmer Matti Mattsson and Russia’s Kirill Prigoda both managed to outswim the British duo from the heat before, hitting respective swims of 2:08.43 for 2nd and 2:09.21 for third.

Upon the conclusion of the 5th and final heat, Kamminga and Mattsson remain the other swimmers under 2:09 and world record holder Anton Chupkov posted a 2:09.44 to win the heat. That will be enough for Chupkov to move on to the next round of racing but was just under 3 seconds slower than his 2:06.12 world record from 2019. Chupkov took gold in the event back at the 2018 European Championships with a 2:06.80. Lithuania’s Andrius Sidlauskas was a 2:09.74 and Erik Persson a 2:09.77 for Sweden to round out the top 3 in the heat.

Great Britain and Russia have set up a solid race for the finals of the 4×200 freestyle relay, finishing just a second apart from each other in the heats. The British contingent of Max Litchfield, Calum Jarvis, Matt Richards, and James Guy delivered 7:08.58 to advance as top seed, trailing their 2018 Championship record of 7:05.32 by just a few seconds.

Italy and France were 3rd and 4th during the prelims session with swims of 2:10.26 and 7:10.44. At the 2018 Championships, Italy earned a bronze medal while France was silver.

Rylov cut it really close. Almost got left out of the semifinals by Tarasevich.

in the final, not the semifinal. the semi comes straight after the 100 free final

Really showing his SCM 100 back world record wasn’t a fluke.

He reclaimed that WR from Xu Jiayu after breaking it a first time in 2017 with a time of 48.90 when he was 17. There was hardly any reason to believe it was a fluke the second time.

Spain on The game also

Last edited 1 year ago by Rafael
4
0
Reply
He said what?

ndoye brouidard the dark horse?
kolesnikov finna steal the spotlight in that back but he could put france’s 4×100 medley in tokyo

With two more rounds to go the breast certainly seems a little crazy.

Thankfully not – they missed the final Olympic QT (held by Belgium) by 0.09 though