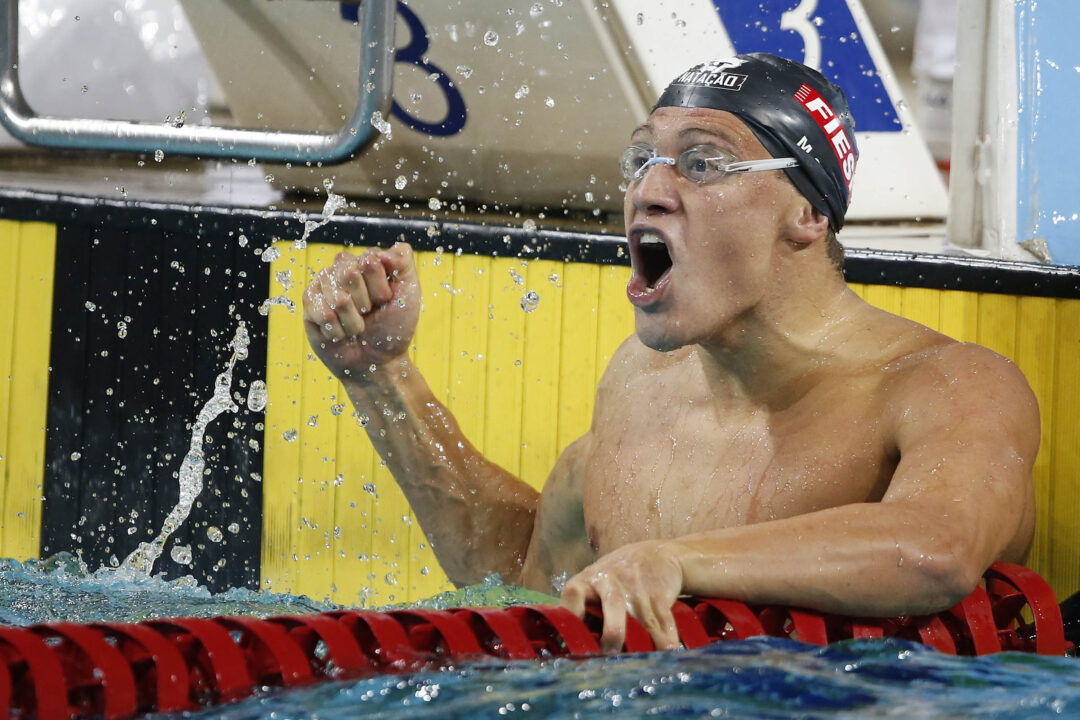 Matheus Gonche added his name to Brazil's Olympic roster tonight by winning the 100 fly with a lifetime best time of 51.94. Current photo via Satiro Sodré/SSPress/CBDA

Saturday’s finals session brings us to the final races of the 2021 Brazilian Olympic Trials. After 5 days of racing, Brazil has compiled a roster of 13 Olympic qualifiers and they are looking to add more tonight.

The fastest time in the men’s 50 freestyle in prelims came from Pedro Spajari who will go after the Olympic qualifying time tonight after missing it in prelims by .01. In addition to the 50 free final, Gabriel Santos will swim a 100 freestyle time trial after Tokyo qualifier Andre Souza was caught in a doping violation.

Santos had finished 9th in that race, meaning he missed out on a chance to race in the finals and will get that second swim tonight. We presume that to make the team on a relay he has to beat Marco Ferreira who finished 5th with a time of 48.95

Vini Lanza topped the 100 fly prelims, looking to also add a second event to his Olympic roster after qualifying in the 200 individual medley.

National Record holder Etiene Medeiros posted the only sub-25 second 50 freestyle this morning as she edged closer to the Olympic qualifying time of 24.77. She would need to swim .17 faster tonight to swim the event in Tokyo.

We will also get to see another women’s distance race tonight, the 800 freestyle whose heat sheets are highlighted by 21-year-old Beatriz Pimentel Dizotti who broke the Brazilian National 1500 freestyle record on Thursday. Her lifetime best 800 freestyle time is 9:03.21 from 2019, about 30 seconds off the National Record.

Stay tuned for a live recap and analysis.

Lorraine Ferreira improved greatly upon her prelims time of 25.01 which had earned her the 2nd seed spot going into finals, as did Etiene Medeiros. But it was not enough to secure the Olympic qualifying time.

The pool atmosphere went quiet when the swimmers powered into the wall, realizing that no one was under the Olympic qualifying time. It was a surprise to Spajari who told reporters that he had been posting times right on the cut during training.

“The time is inside me, I train a lot for this,” he said in his post-race interview. “I’m very frustrated.”

He will still represent Brazil in Tokyo in the 100 freestyle though, now as the top qualifier after Souza was removed due to a doping violation.

Victor Alcara was .03 off the time he posted in prelims, ultimately finishing in 2nd. 41-year-old Nicholas Santos came in 3rd, bettering his prelims time by a solid .44.

It was an even race between Natalia de Luccas and National Record-holder Fernanda Goeiji at the halfway point, but then Goeiji took off and finished with a 3 second lead over the field.

Goeiji greatly bettered her prelims time of 2:18 but was unable to match her Nation Record from 2019, which is about 1.5 seconds off the Olympic qualifying time.

Matheus Gonche had an incredible race, beating his lifetime best from 2019 by .73 to undercut the Olympic qualifying time by .03. Gonche smacked the water, flexing as he sat on the laneline to celebrate.

He was all smiles during his post-race interview, talking about having to train for 5 months out of the water due to the coronavirus pandemic. He repeatedly thanked his coaches and attributed bringing positive energy to the pool deck as one factor in his victory tonight.

This was also a great swim for Kayky Mota whose lifetime best was set at 52.73 from the U.S. Open Championships in November 2020. Lanza was the top seed going into finals, and he did improve upon his prelims time by .11, but it was not enough to secure a qualifying time in this event.

This was a surprisingly close race, as far as distance events typically go, with the three women neck-and-neck to the 500-meter mark. Then it was Roncatto who took control of the race, pulling increasing her slight lead to a body length and a half with 150 meters left.

This was a phenomenal swim for Roncatto, destroying her lifetime best from 2017 by 9.5 seconds, though she missed the Olympic qualifying time by about 6 seconds. She pushed both Dizotti and Cunha to new lifetime bests as well. Dizotti’s previous best time was set at 9:03.21 in 2019 while Cunha’s was 8:48.33 from 2019.

Gabriel Santos ripped down the pool, racing only himself and the clock. He posted a time of 48.49 which would have finished  3rd in the 100 free final directly behind Spajari and under the qualifying cut of 48.57. With 1st place finisher Andre Souza out, Santos just earned himself a spot on Brazil’s Olympic roster as the #2 qualifier behind Spajari who posted a 48.31.

Santos took out the race with a blistering 50 meter split of 22.80 to drop .73 from the time he clocked in prelims the other day.

Santos said he benefitted from the intense atmosphere at the meet and thrived under the pressure of having a second solo swim. “I couldn’t find a good rhythm,” Santos said about his initial prelims swim. He said he knew he was better than that prelims swim, and tonight he definitely showed that.

If a swimmer doesn’t get a qualifying time in one event (but is still under the A standard) but makes it in another event…can they not swim both at the games since they’ll already be there anyway? Doesn’t seem like it would cost the federation any extra money

Hi guys!
Glad to be here!
You can check some races here:
https://www.youtube.com/playlist?list=PL_XL7TfgJu-aNhVsl6WwDzuU-Ciuig73E

Happy for the 100 free result, in regards to the relay. Nobody gets the second individual spot, or does the 48.49 make it?

Gabriel Dos Santos makes it. The winner times are excluded like he never swam the event and Gabriel came in second behind Spajari.

Noteworthy, the 4 guys swimming in Brazil 4x100free trains together in Pinheiros.

Terrible time by etiene if she swam a 1:01 flat the Relay would have gone 4:01

Very underwhelming trials to say the least. I don’t know if it’s the pandemic, the outdoor pool or just bad timing, but Brazilian swimmers are better than what they showed this week. Very disappointing times compared to the rest of the world so far. Maybe those who did make it, can bounce back in Tokyo

I understand that covid had a significant impact on their training and I am not blaming the swimmers, I am sure that they are the ones who want it the most and the first ones to get disappointed with themselves.
It seems like sometimes swimmers feed of off each other’s success and meets that were fast from the beginning continued to be fast across the board. This meet was pretty slow (in Brazilian standards) from the beginning and maybe had an impact on the atmosphere which wasn’t that great, especially without fans.

Not sure what you expected? Brazil just doesn’t have many world class athletes, so i would say most times were pretty much as expected. I think realistically only 6 or 7 brazilian athletes could final in Tokyo.

There was definitely more expected from the men’s 100 free, and also from Lanza but I agree that Brazil will probably only make around 6 finals in tokyo and tbh the only medal I see them winning is Fratus in the 50 free, and even that is not certain with the likes of Dressel, Proud, Morozov and Manaudou all competing in Tokyo

ANNIKA,
the events today don’t stop at Women’s 800free. After that, we will have Gabriel Santos 100free time trial and Women’s 4x100Medley time trial.