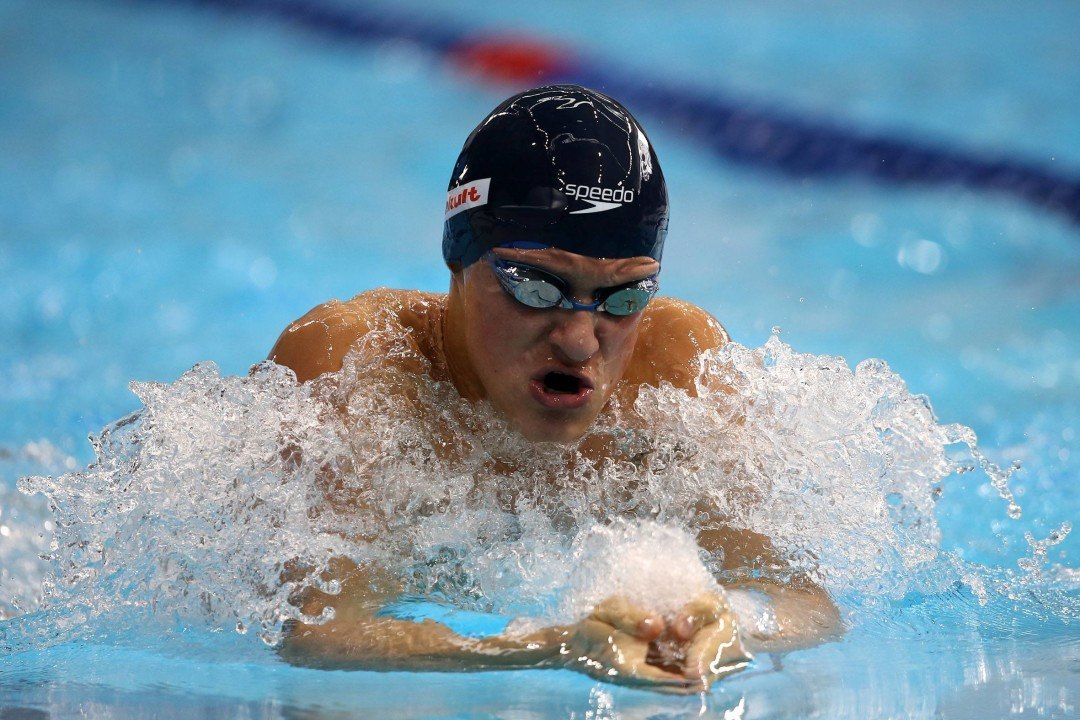 There are now 11 names on the Brazilian Olympic roster after four days of competition, with Beatriz Pimentel Dizotti yesterday becoming the first woman to make the cut in an individual pool event (1500m free).

In the prelims today, the women’s 100m free saw five women stopping the clock under the 56 second mark in today’s prelims, led by Ana Carolina Vieira in 55.15 – who enters the finals session as top seed. She is less than a second off the FINA ‘A’ cut of 54.38 which she’ll need in order to be considered for a spot on the Olympic team.

Other athletes expected to go for those all-important FINA ‘A’ times this evening include Leonardo De Deus in the 200m backstroke – his best time of 1:57.00 sits under the Olympic qualification time of 1:57.50 which would lead him to his third consecutive Games if he makes the cut.

The men’s 200 IM is stacked with Caio Pumputis, Leonardo Santos, Conrado Lino and Vini Lanza, who all appeared to cruise their morning swims in preparation for tonight’s showdown.

As expected, Leonardo de Deus took the win comfortably here, touching in 1:58.74. Taking down his morning swim by roughly 7 seconds, his time in the final was a little over a second off the Tokyo consideration time.

A close battle for second saw Gabriel Fantoni out-touching Brandonn Almeida at the wall, who posted 2:02.34 and 2:02.72 respectively. Fantoni took the race out hard and was first to the wall at the 50m mark, turning in 27.59. A strong back-half from Almeida saw him almost catch up his countrymate at the 150m mark – yet his third place finish here in still roughly three second off his personal best of 1:59.71 from 2016.

Sprinting veteran Larissa Oliveira showed her class tonight as she came from 5th seed to take the win in the 100m free. Her time of 54.39 is painfully close to the Olympic qualifying standard at just 0.01 away. The national record holder has a best time of 54.03 which has stood since her Olympic debut in 2016.

Behind her was home-favourite Ana Carolina Vieira who came into this meet with a registered personal best of 57 flat from 2018 took yet another chunk off her time from this morning.

16-year-old Balduccini took third in yet another huge swim – she downed her personal best by nearly 3 full seconds in the prelims and lowered that mark yet again in the final.

Pumputis turned up the heat here to slip comfortably under the all-important Tokyo consideration time of 1:59.67 – placing him at #17 world-ranked time for that event this season. A strong breaststroke leg (split 34.04) allowed him to pull ahead of Lanza and Santos, who both took the race out hard and were ahead at the 100m mark.

Lanza also made the qualifying cut here by less than 0.10 of a second. The former Indiana Hoosiers swimmer has now set up him for what will be his Olympic debut if selected. This swim is a major comeback after he missed out on the final of the 200 fly earlier in the week. He took that race out hard in 56.63 and came back in a rough 1:07.54, placing him 9th after the prelims and out of the final. Bearing in mind his pb of 1:57.04 would have placed him second in that event had he made the final.

Lanza is racing in the 100m fly on the final day of competition where he is the first seed, entered with a time of 51.66.

Da Silva retained her winning streak in this event, this time dipping under the 2:30 mark. It was a tight battle between her and de Souza, who was leading all the way until the 150m mark after splitting 1:11.49 at the half-way point where she held a half-second lead over the ultimate winner. Da Silva stormed down the final 50m to nab the win, splitting 39.19 to finish roughly a second off her personal best of 2:28.53 from the South American Championships in March this year.

He was out on his own in this race, with second place Villarinho over 20 seconds behind him – his best time stands at 15:15.91 from the World Championship in Gwangju, Korea in 2019.

Before someone says my name. I have no idea what it is, if doping per se, marijuana, TUE.

Pumputis with the Olympic cut!!

Making the 2IM takes so much pressure off him for the 100fly. Sets him up for a way better race then his 2fly.