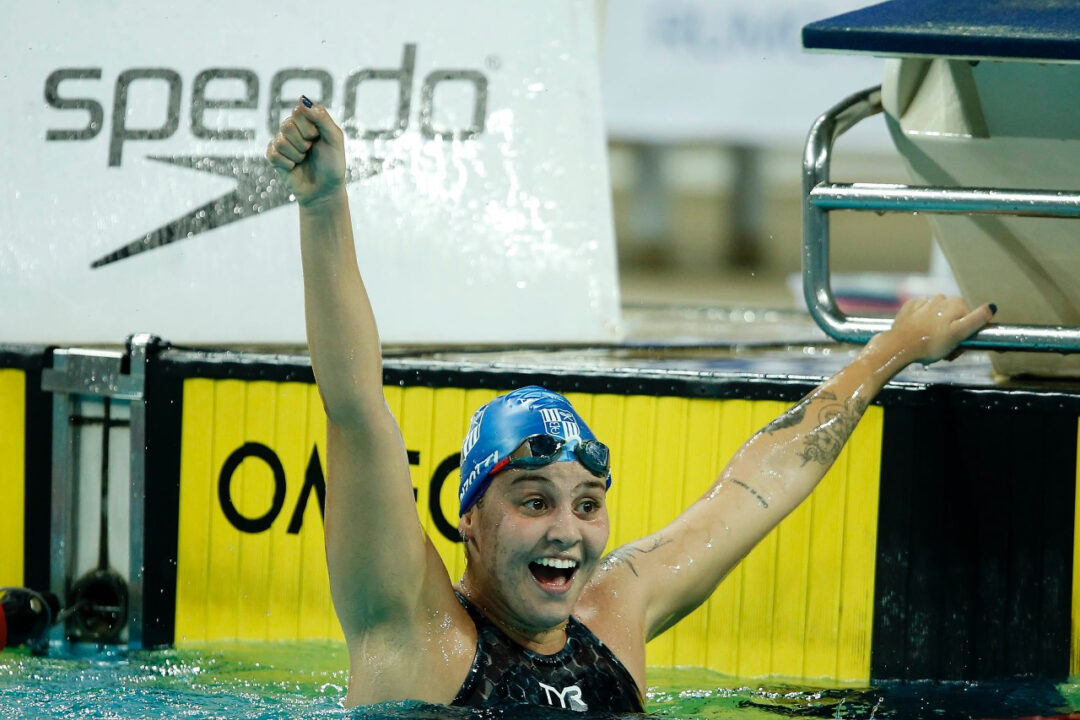 So far, seven Brazilian swimmers have punched their tickets to the Olympic Games by swimming under FINA “A” Standards at this week’s Brazilian Olympic Trials in Rio.

Poor weather conditions that swimmers have expressed concerns over throughout the week persisted on Thursday morning, though conditions seem to have improved, at least in terms of wind and rain, for the finals session – though at 70 degrees as of start of finals, it’s still cold for an outdoor meet.

Friday’s meet will see the women’s 1500 free final, men’s 100 free final, women’s 200 free final, and a women’s 800 free relay time trial as the country hopes to move up in the Olympic rankings.

No swimmers entered the women’s 1500 free timed final seeded better than the Olympic qualifying standard in the event, but the top three finishers all swam well under the mark in the event.

That includes the winner Beatriz Pimentel Dizotti, who swam 16:22.07 to dip four-tenths of a second under the old Brazilian Record. Delfina Pignatiello of Argnentina still holds the South American Record in 15:51.68.

The woman who held that Brazilian Record previously, Viviane Jungblut, isn’t in attendance at the meet this week after she tested positive for coronavirus. She’ll be one of 5 swimmers who will race at a Time Trial on June 12 to attempt a last-minute Olympic qualification.

The 2nd-place finisher was Ana Marcela Cunha, who was 16:25.76 on Thursday evening. Cunha is already qualified to race the open water 10km race at the Tokyo Olympic Games, and said in her post-race interview that she would not swim this event in Tokyo.

The means Jungblut’s target in June is the 3rd-place finisher Betina Lorscheitter who finished in 16:27.73, which was also well under the Olympic qualifying standard – more than 4 seconds. She raced in 2nd place for about the first 975 meters of this race, but Cunha’s endurance (she’s the defending World Champion in the 5km and 25km open water races) kicked in late as she pulled away for 2nd.

The torch has been handed over in the men’s 100 meter freestyle in Brazil, as two new faces will handle the individual duties in Tokyo.

20-year old Andre Luiz Souza won the race in 48.15 and 23-year old Pedro Spajari, holder of one of the fastest 400 free relay splits ever, made an individual breakthrough to touch 2nd in 48.31. That puts both swimmers under the Olympic qualifying standard, though both will need further improvements to contend for a medal.

Breno Correia took 3rd in 48.74 and Marcelo Chierighini took 4th in 48.83. Those two will likely be granted relay spots, but that’s short of the individual swims at the 2019 World Championships that both had in this race. There, Chierighini placed 5th and Correia placed 8th in the final.

Felipe Ribeiro Souza placed 5th in 48.87. According to Brazil’s selection policies, he would have had to be under the Olympic Selection Standard to be under consideration for a relay-alternate slot, but he was not.

Chierighini is the only member of the Rio Olympic relay that placed 5th who will return on this relay for Tokyo.

Lucas Peixoto, who won the South American title in this event in March in a 49-low and who was a 48.8 in prelims swam to just an 8th-place finish in finals in 49.74.

With the Olympic standard almost a second faster than the Brazilian Record, and with Joanna Maranhao retiring in 2018, this women’s 200 fly was one of the least-likely events to mount a qualifying charge this week.

Ultimately, the field fell short, with Giovanna Diamante winning in 2:15.93. That’s about four seconds slower than her lifetime best of 2:11.82 done in November 2019

Paced over the first 100 meters by his sprint-focused Pinheiros teammate Felipe Lima, Caio Pumputis swam to a 2:11.81 in the men’s 200 breaststroke final. That was good enough for a win by more than a second, but it was well shy of both his best time (2:09.93) and the Olympic Selection Standard (2:10.35).

The first 100 split was overall very similar to when he swam his 2:09, but the race fell apart on Thursday in the closing 50.

Andreas Mickosz finished 2nd in 2:13.03, which is about a second-and-a-half short of his best time as well.

The Brazilian women sent only two swimmers, and raced no relays, at the 2019 World Championships, which means they would need to swim a top 4 time during the qualifying period (excluding the top 12 finishers at Worlds who are already qualified) to earn a spot in this 800 free relay at the Olympic Games.

They entered the meet ranked 8th in that battle, and jumped all the way to 2nd with an 8:00.92 in a time trial swim.

While that time won’t likely final, it does give them a chance to qualify. The biggest threat to that status right now are the upcoming European Championships in May, where Great Britain, Belgium, Israel, and Spain could all pass them. Great Britain can definitely put together a sub-8 minute relay, while Israel, if they can get Andi Murez and Anastasia Gorbenko firing together, looks capable of 7:56-or-better. Spain has shown lackluster results in the 200 free in recent years, and Belgium would need a special leg from Valeria Dumont to get there, so Brazil is in a good position, though not totally safe, at the moment.

Brazil has been the worst country in the pandemic this year I think it is incredible that they can still swim reasonably well. I believe they will be better at the olimpics

I don’t know what criteria you were using to say that Brasilia is the worst, but if to rank countries by the number of deaths associated with COVID related to the size of population then Brasilia is #14

Anybody have an idea where these 100 free results put Fratus in terms of relay potential? Not sure how Brazil selects their relay swimmers.

Since he went at 51 shaved at Mission Viejo, I doubt he or they are interested in him swimming it.

I think it was the meet during a storm

Have to assume he will be on then.

There’s something wrong about this meet.

Outside because of Covid?

Because of who knows.. a lot of swimmers are angry

Spajari was sub 48 already, Gabriel too, chierighini. It was not something impossible.

No one under 48 for Brazil.

Chierighini terrible start? From the video doesn’t look so (whilst it’s clear that his stroke isn’t that of a brilliant period of form). Chierighini swam in lane 7 beside Breno Correia https://www.youtube.com/watch?v=HbKUwT8fvFs

It was okay compared to the field.. while his start is not on a Nicholas level, it it usually much better specially his underwaters.. he went out over 23 seconds which is way off

But I also agree that the stroke of many swimmers (Breno, Brandonn among others) are pretty bad. Probably a combionation of poor pool conditions and impact of Covid on preparation.