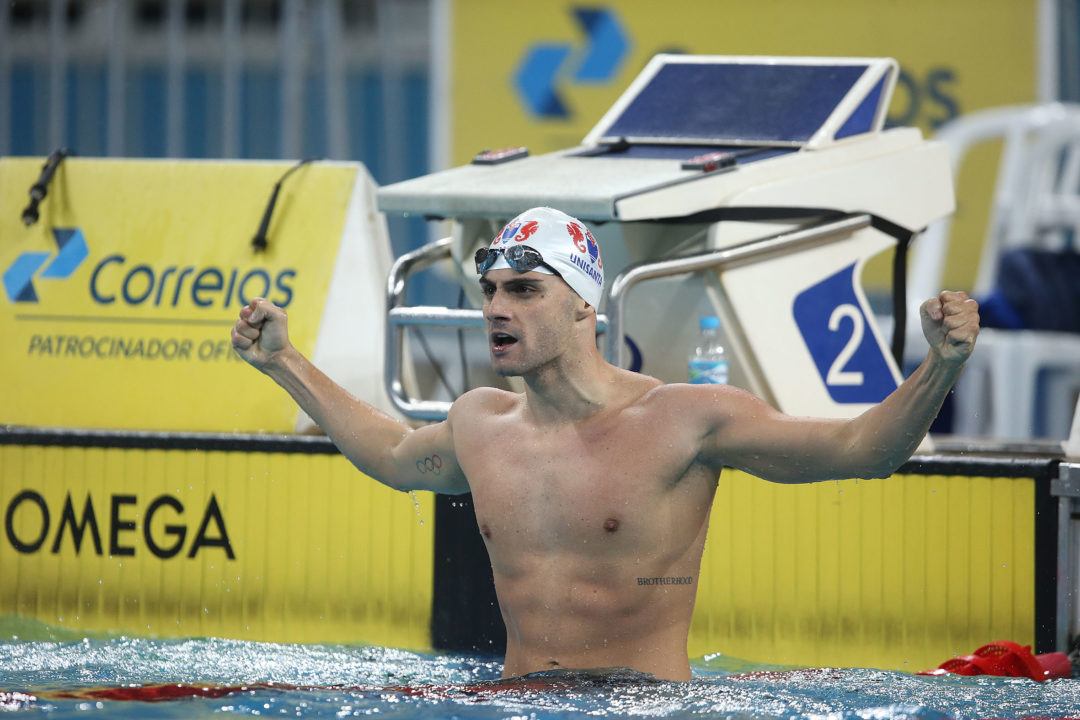 De Deus's victory in the 100 fly qualified him for his 3rd consecutive Olympics. Costa posted the 8th fastest 800 free time in the world this season: 7:50.41 Archive photo via Satiro Sodré/SSPress/CBDA

One swimmer added his name to Brazil’s Olympic roster during Wednesday’s finals session of the 2021 Brazilian Olympic Trials, and it was two-time Olympian Leonardo De Deus. This will be 30-year-old De Deus’s third consecutive Olympic Games, as he placed 13th in the 100 fly at the 2016 Rio Olympics.

Tonight, he won the race with a substantial lead of about 3.5 seconds. After touching the wall with a time of 1:56.01, a little less than half a second under the qualifying time, and hopping out of the pool, De Deus gave a quick thumbs up and salute as he smiled at someone off-camera.

“I am very happy for this classification, it was not easy,” he told reporters after his race. You could see him grinning beneath his mask throughout most of the interview.

This swim ranks him 14th in the world this season behind South Africa’s Chad le Clos:

De Deus also finished in 13th place in the 200 backstroke at the 2016 Rio Olympics, an event that will be contested on Friday.

22-year-old Guilherme Costa added the 800 freestyle to his Olympic schedule during Wednesday’s finals session of the 2021 Brazilian Olympic Trials. The South American and Brazilian National Record-holder commanded the race, touching the wall 9 seconds ahead of the field with a time of 7:50.41 and ranking himself 8th in the world this season:

He was 3 seconds off his own South American record of 7:47.37 from the 2019 U.S. Open and he expressed some disappointment in his time tonight during his post-race interview. If he repeated that swim tonight, it would have been the 4th fastest 800 freestyle in the world this season.

However, Brazil’s distance star is set to swim the 1500 freestyle on Friday, and he told reporters that he is looking forward to it. His lifetime best time, 14:55.49 from the 2019 U.S. National Championships, is 5 seconds faster than the Olympic qualifying standard so he has a good chance of earning a spot on Brazil’s Olympic roster in every distance freestyle event.