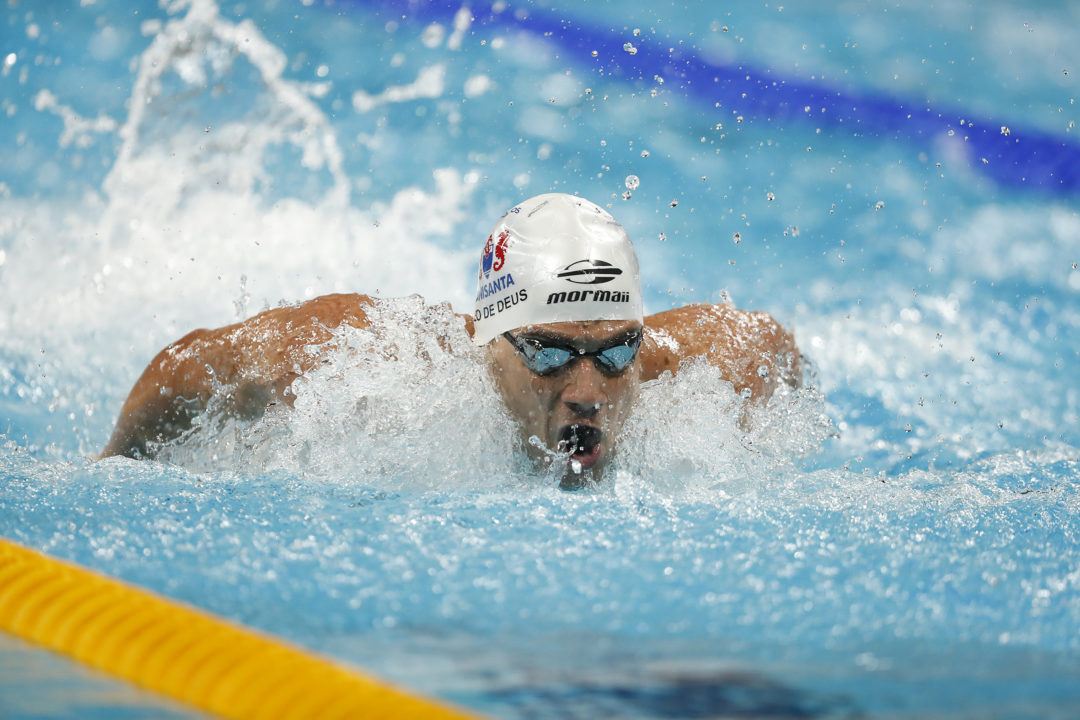 Two-time Olympian Leonardo De Deus has the fastest 200 fly seed time but he is going into tonight's final ranked 3rd as he aims to make his 3rd Olympic team. Archive photo via Satiro Sodré/SSPress/CBDA

The 200 butterfly should be the race to watch tonight, with the top 4 competitors within 1 second of each other. Olympic veterans Leonardo De Deus and Luiz Altamir Melo are ranked 3rd and 4th, respectively, while Kaue Carvalho and Matheus Gonche lead the field.

There was reportedly some trouble with the weather last night as swimmers battled the wind at this outdoor pool. Tonight, the weather report in Barra da Tijuca predicts light rain showers and 5 miles per hour winds for the duration of the finals session, alongside chances of a thunderstorm.

Stay tuned for a live recap and analysis.

Brazilian distance star Guilherme Costa was on pace to match his National Record swim from the 2019 U.S. Open at the 200-meter mark but by the halfway point he had fallen off a bit, flipping at 3:53.95 compared to 3:53.15 in 2019. This time ranks Costa 8th in the world this season, .01 ahead of Japan’s Shogo Takeda.

He still beat the Olympic qualifying cut by nearly 4 seconds, but he could be seen shaking his head slightly while walking away from the pool. In his post-race interview, Costa mentioned he was looking forward to the 1500 freestyle on Friday.

Valente and Villarinho had a surprisingly close battle for 2nd place, staying with each other throughout the whole race. Valente pulled away about 1.5 seconds at the 600-meter mark but Villarinho chased him down at the finish, touching the wall .11 after him. This was a lifetime best by 4 seconds for Valente, crushing his previous best from the 2015 Pro Swim Series. Villarinho took 3.5 seconds off his lifetime best from the 2019 Pan American Games.

Nathalia Almeida commanded the race from the start. She was already 3 body lengths ahead when she turned into the freestyle length as she powered into the wall, taking nearly 2 seconds off her lifetime best time from 2016.

2003-born Fernanda Celidonio made her move on the backstroke leg, making up for Fernanda Goeij‘s .30 lead over her on the first 50 meters. As she chased Almeida’s waves, Celidonio raced to the wall with a 50 freestyle split of 32.21, right on Almeida’s split time of 32.15.  No one else broke 32.50 on the last 50. This was a phenomenal swim for Celidonio who took 7 seconds off her lifetime best from the 2017 World Junior Championships. Goeij undercut her previous lifetime best from 2017 by half-a-second.

De Deus told reporters he was a little nervous leaving the house for this meet, but he was all smiles after punching his ticket to the 2020 Tokyo Games with a time of 1:56.48. The 3rd 50 meters is what really set him apart from the field as he split a 29.77 compared to Gonche’s 30.54.

After the race when he hopped out of the pool, De Deus gave a quick thumbs up and a salute while smiling at someone off-camera.

“I am very happy for this classification,” De Deus said in his post-race interview. He shouted out his family, his 8-month-old son and wife, and other Brazilian Olympic swimmers including Nicolas Santos as his “eternal teachers.”

While he missed the Olympic qualifying cut, this was a great for Gonche who undercut his lifetime best from 2019 by 1.5 seconds. Surprisingly,  Altamir Melo, who made the semifinals at the 2019 World Championships alongside De Deus, was off of his best time which is faster than the Olympic qualifying cut. Melo represented Brazil at the 2016 Olympics in the 400 freestyle, an event he placed 8th in on Monday.

Even though she missed the Olympic qualifying cut, Rodrigues shed tears of joy during her post-race interview. She expressed her gratitude for everyone “who didn’t give up on [her]” and while she missed her goal of 1:57, she acknowledged that this season was not normal (referencing the coronavirus pandemic.)

This was the closest race of the night, as Olveira actually flipped first at the 50-meter mark by .02. Rodrigues built a lead of .59 at the halfway mark but it was a back-and-forth race until the very end.

This was a great swim for Rodrigues, about half-a-second faster than her lifetime best from the 2019 Pan American games. Oliveira’s 2016 lifetime best, 1:57.37, is right on the Olympic qualifying time but she wasn’t able to match it tonight.

Notably, this was Almeida’s 2nd race of the night, just 30 minutes after her victory in the 200 individual medley. She broke 2:00.00 for the first time tonight, taking 2 seconds off her best time from 2019.