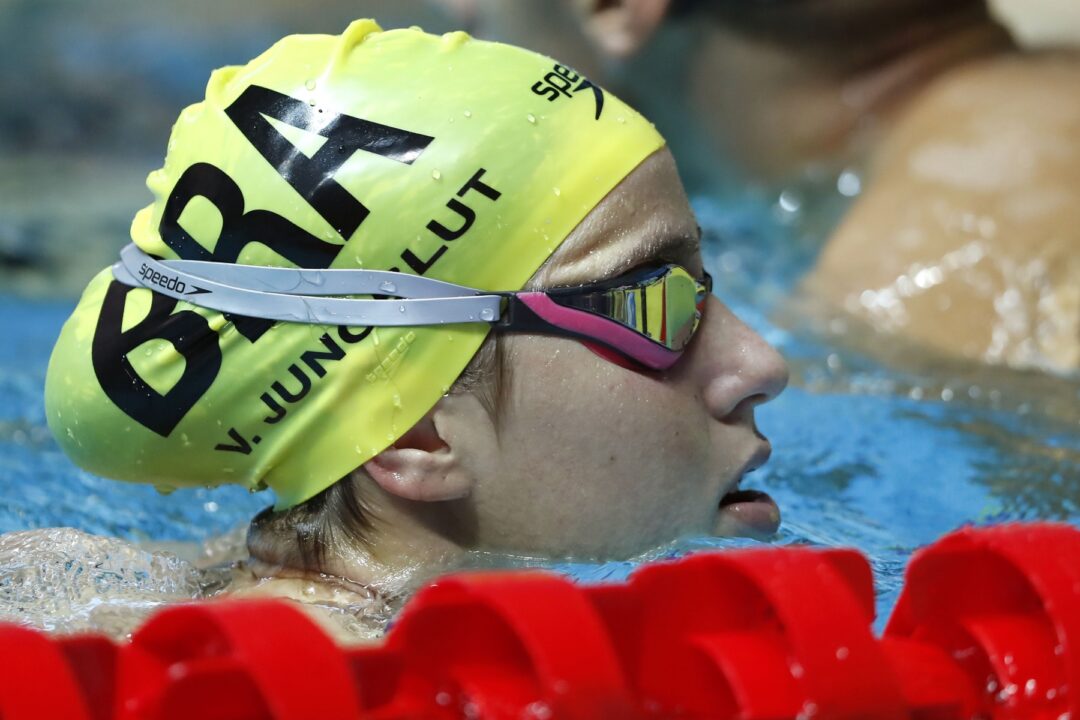 Brazilian Record holder in the women's 1500 free Vivianne Jungblut (above) is one of 5 who will miss this week's trials with positive COVID tests. Archive photo via Satiro Sodre/SS Press

A group of 6 swimmers who were among the 103 expected at Brazil’s Olympic Trials this week will not participate, reducing the field to 97, according to Brazil’s Best Swimming.

Among those are 5 athletes who tested positive for coronavirus and a 6th, Maria Eduarda Sumida, who chose not to return from the United States, where she trains and studies at the University of Louisville.

The 5 Brazilian Swimmers who tested positive:

The 5 who tested positive will be given the opportunity to race a time trial on June 12 with the possibility of earning any open spots on the Olympic Team. Of the group, the one with the most serious Olympic potential is Viviane Jungblut, a 24-year old distance swimmer who won bronze medals in the 10km open water and 800 free at the 2019 Pan American Games. She is the current Brazilian Record holder in the 1500 free, with a 16:22.48 set at the 2017 World University Games.

Swimmers must hit a FINA “A” standard to be eligible for selection. Her best time in the 1500 is 10 seconds better than that standard. The top seed who is racing this week is Unisanta’s Ana Marcela de Cunha, an open water specialist and 5-time world Champion. She is already qualified for the Olympics in the 10km open water race. Her seed time of 16:38.05 is 6 seconds short of the requisite qualifying mark. There are a few young swimmers in the field this week who could have the kind of drop that young swimmers sometimes do and get under the requisite 16:32.04, but it seems unlikely that two swimmers will do so and freeze Jungblut out.

Other prominent names on the list include Lucas Souza, who represented Brazil at the 2019 World Championships and qualified for the semi-finals of the 100 free. He palced 13th in that semi-final in 50.43.

Meanwhile, a trio of swimmers who tested positive after attending the South American Youth Championships have cleared protocols and are entered to race this week:

Brazil is currently one of the hardest-hit coutnries on earth by the global coronavirus pandemic. Having reported over 14 million cases overall, the country has just over the last week begun to recede from record highs in cases and deaths. Over the last week, the country is averaging over 65,000 new cases and 3,000 new deaths daily from COVID-19 in a country of 211 million.

Those are higher counts than the United States, with a population of around 330 million, which has generally led the world in most cases and deaths over the last year.