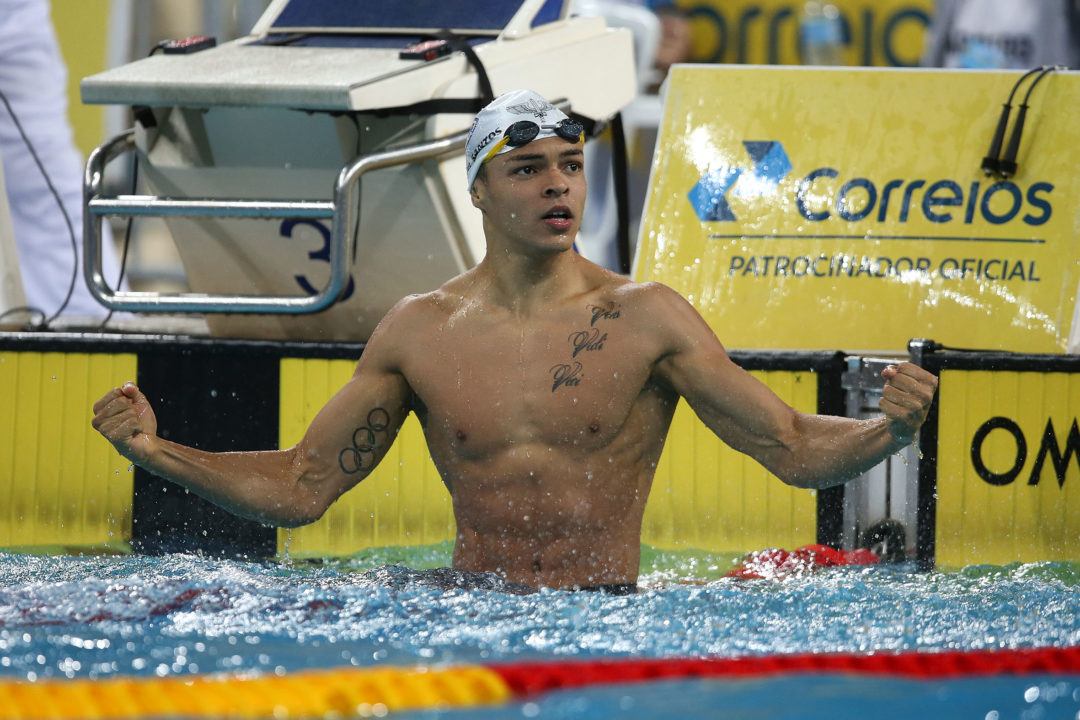 After one of the top 4 was suspended for an alleged doping violation, the CBDA will offer Santos a second chance to make the 400 free relay for Tokyo. Archive photo via Satiro Sodre/SS Press

UPDATE 4/24/2021: Brazil’s Globo.com reported that Andre Luiz Calvelo de Souza is the swimmer who was provisionally suspended from the rest of the Brazilian Olympic Trials in Rio after being called out by ABCD for alleged doping violations.

The Brazilian Doping Control Authority (ABCD) notified the Brazilian Confederation of Aquatic Sports (CBDA) on Friday that one of the swimmers who had qualified for the Olympic Games in Tokyo had failed a doping test and was to be placed on immediate provisional suspension.

Citing the confidentiality of the process, the CBDA’s press release did not mention the athlete’s name but indicated the positive test took place on March 18, 2021.

Given that the Brazilian swimming authorities are offering a time trial to the 9th-place finisher from Thursday’s 100 freestyle prelims, one can assume the suspended swimmer was one of the top four finishers last night:

Felipe Ribeiro Souza placed 5th in 48.87. According to Brazil’s selection policies, he would have had to be under the Olympic Selection Standard (48.57) to be under consideration for a relay-alternate slot.

As 6th through 8th finishers in Thursday’s final – Marco Antonio Ferreira (48.95), Victor Guimarães Alcará (49.01), and Lucas Peixoto (49.74) – all had two opportunities to finish among the top four, the CBDA is extending a second chance to Gabriel Santos who finished 9th in prelims with 49.22. If the case moves forward and the swimmer’s 100 free results are stripped, either Santos or Souza will likely make the squad for Tokyo. On the other hand, if the suspended swimmer’s B sample comes back clean, the results from last night will stand.

Santos swam on Brazil’s 400 free relay at the 2016 Olympic Games in Rio, teaming up with Chierighini, Nicolas Oliveira and Jaoa de Lucca to place fifth in the final.

It is unclear whether the CBDA will organize Santos’ time trial at the end of this week’s Brazilian Olympic Trials or at the June 12 time trial organized for those athletes who had tested positive for COVID.

Statement from the Brazilian Confederation (via Google Translate):

(Rio de Janeiro, April 23, 2021) The Brazilian Confederation of Water Sports received, on Friday (23), a statement from the Brazilian Doping Control Authority notifying the immediate provisional suspension of a Brazilian swimmer summoned to the Olympic Games from Tokyo.

According to the ABCD statement, the test was carried out outside the competition period (March 18, 2021 prior to the Olympic Swimming Selection Meet). As the statement was sent to the CBDA on Friday at 3:33 pm, all swimmer results at the Olympic Qualifiers will be provisionally suspended until otherwise decided. It is worth mentioning that the process is confidential and additional information is the responsibility of the regulatory agency.

The ninth runner-up in the suspended athlete will be called up for an official time-out valid for the Tokyo Olympics. If the mark does not exceed those of the other athletes in the race, the swimmer with subsequent placement will be summoned to the Olympic Games.

They should just have a new competition for all the other men from prelims to finals.

There’s really no proper way to do this. No matter what happens, someone is going to be mad.

I’m sure everyone in the federation was hoping-against-hope that Santos would just be slow in his time trial.

Can someone tell me why they didn’t keep the top 4 from finals (minus Andre)? What is the FINA protocol for that? I’ve never heard of they giving a second chance to the 9th place to swim a day later, rested, with the pool to himself? Pinheiros bought this so they could have 4 guys on the relay. SHAME

Why not just say who it is? Aren’t we going to find out anyway? The other 3 swimmers with clean samples must be annoyed. It puts suspicion on them for no fault of their own, no?

Waiting on B sample results.

Here at swimswam we don’t jump to conclusions, but we swim to them.