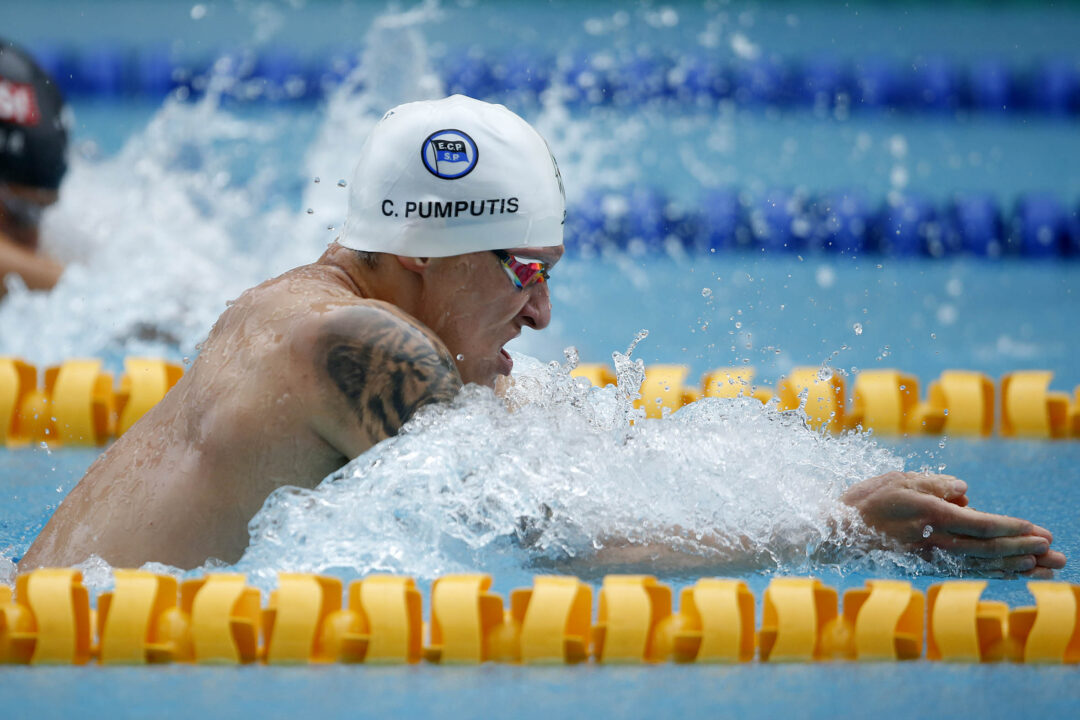 Caio Pumputis and Vini Lanza cracked the Olympic qualifying time in the 200 IM tonight, with Pumputis commanding the race with a lifetime best time (1:58.53.) Current photo via Satiro Sodré/SSPress/CBDA

Costa, the Brazilian National Record holder in the 400 freestyle, 800 freestyle and 1500 freestyle, undercut the Olympic qualifying time in the 1500 free tonight by 1.7 seconds to claim a spot on Brazil’s Olympic roster in every distance freestyle event.

He was also scheduled to represent Brazil in Open Water at the Tokyo Olympics after he finished in the top two at Brazil’s Open Water qualifying race in March. But, during his post-race interview on Friday, Costa announced he will be dropping the open water event in order to focus on his three distance pool races. Diogo Villarinho will now take Costa’s place for the Open Water events alongside Alan do Carmo.

2019 Pan American silver medalist Caio Pumputis was the first swimmer to clock an Olympic qualifying time on Friday, winning the 200 IM with a time of 1:58.53 and besting the qualifying time by a full second. This was a significant time drop for Pumputis whose lifetime best going into this meet was 2:00.09 from the 2019 U.S. National Championships.

Second-place finisher Vini Lanza also punched his ticket to Tokyo by cracking the qualifying time by .09 with a time of 1:59.58. He started off with an aggressive pace, leading the pack with Leonardo Santos but Pumputis’s 34.04 breaststroke split overtook them.

This time ranks Pumputis 17th in the world this season:

This was a big swim for former Indiana star Lanza who surprisingly missed the 200 fly on Wednesday. He beat his lifetime best time from 2017 by exactly 2 seconds.

Lanza will also be aiming for the Olympic qualifying time tomorrow in the 100 fly where he is the top seed and only swimmer ranked with a time faster than the qualifying standard. He won bronze in this event at the 2019 Pan American Games.

Notably, Olympic veteran Larissa Oliveira came painstakingly close to the Olympic qualifying time in the 100 free, missing it by .01. She placed 21st in the event at the 2016 Rio Olympics. She still has the 50 freestyle tomorrow where she is ranked 3rd and is about half a second off the qualifying cut.

There is only one more day of racing at the Brazilian Olympic Trials in Barra da Tijuca, and it begins at 9:30am local time (8:30am EDT) with the men and women’s 50 freestyle, women’s 200 backstroke, men’s 100 butterfly and women’s 800 freestyle. After five days of competition, Brazil’s Olympic roster has 13 members:

Great to see Pumputis pull through. It’s been a long week for some at this meet w/ the less than ideal conditions in play.

Anyone know which qualifier had the adverse doping result?

Brazil media says it iz Andre Luiz Souza, the winner of the 100 freestyle.