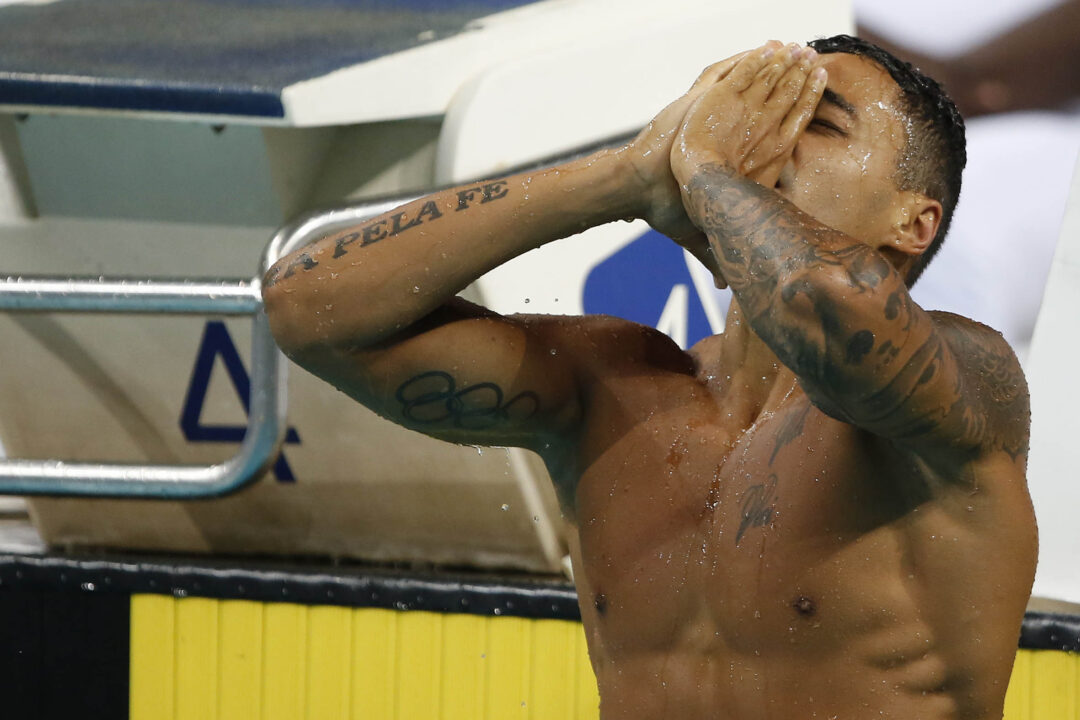 Santos was offered a second swim after top qualifier Andre Souza was suspended due to a doping violation. Santos dropped .73 from his prelims time for a 48.49 Archive photo via Satiro Sodré/SSPress/CBDA

The 2021 Brazilian Olympic Trials concluded tonight and with six days of racing completed, Brazil’s Olympic Roster has grown to 15 swimmers.

After Andre Souza , the top qualifier in the men’s 100 free, was removed from the roster following a doping violation, 9th place finisher Gabriel Santos was offered a time trial. He only needed to beat 48.95 to join the top 4 and be considered for a relay spot, but Santos blasted a 48.49 and undercut the Olympic qualifying time by .08.

Santos competed in the 2016 Rio Olympics as part of Brazil’s 400 freestyle relay which finished in 5th place. This will be his first individual Olympic event. His fastest time before this meet was 48.30, a time he posted at the 2017 FINA World Championships.

Matheus Gonche won the 100 butterfly with a time of 51.94, being the only swimmer under 52.00 and beating the Olympic qualifying time by .02. Gonche was thrilled during his post-race interview, mentioning the unique training circumstances that the coronavirus pandemic inflicted on him and his competitors. He said he trained for 5 months out of the water.

Can someone tell me why they didn’t keep the top 4 from finals? What is the FINA protocol for that? I’ve never heard of they giving a second chance to the 9th place to swim a day later, rested, with the pool to himself? Pinheiros bought this so they could have 4 guys on the relay. SHAME

Gabriel Santos replaced the other guy that got caught in doping but wasn’t Gabriel also caught like 2 years ago?

Yes, and the guy who took his spot on the roster was the one doping this time. What an irony….

So Santos missed the final but the positive test allowed them to conjure up a second chance for him to swim a time trial? Why not let all swimmers 5th-16th swim again to establish the team. If he gets the individual why should he get an extra chance and not the guy who finished 3rd. He swam a good time trial but it doesn’t look fair to me.

He didn’t get an additional chance…since the initially pronounced winner wasn’t supposed to be there at all AND the trials were still going on, Santos just got a chance to swim the race he earned to be in…they could’ve gone the other way and that would also have been ok…but there’s no issue with their decision…both options the federation had were valid…

I agree that this was not handled right. He missed the final and could argue that having finished 9th in the semis, he would have made it but for doped Souza.

But the other 7 from the final who didn’t make the individual cut then have a stronger case than him.

A fairer decision would have been to have him and those who finished 7 and 8 to do a swim-off for the last place in the relay.