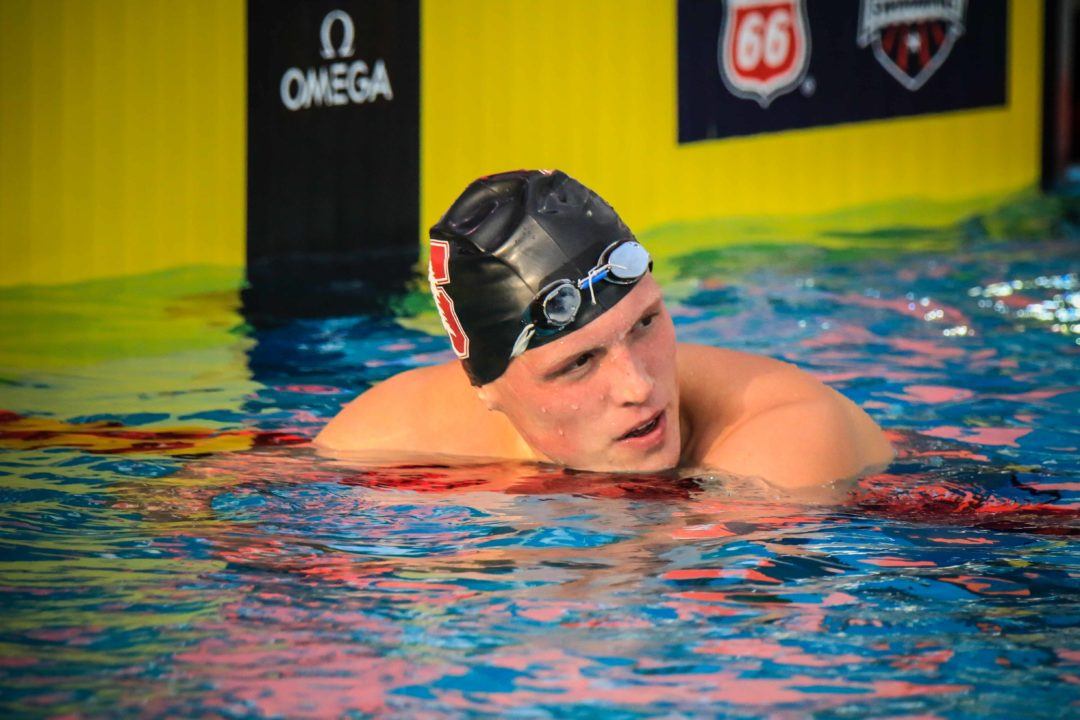 The landscape of the men’s 400 IM has radically changed since last year, as six of the eight finalists will not be returning this season. Andrew Seliskar, last year’s third place finisher, has opted to swim the 200 free instead of this event. South Carolina’s Bradonn Almeida picked up a fourth place finish during his freshman debut, but left school to return to his home country of Brazil in the fall. The remainder of last year’s championship final was composed of seniors.

Looking historically, Stanford’s Abrahm DeVine is the overwhelming favorite to take this event, as he is the defending national champ and the second fastest performer in history. He hasn’t been near his best this season, and enters the meet as just the #30 seed with a 3:43.32, but his personal best of 3:35.29 is over two seconds faster than anyone else in contention.

The question for DeVine won’t be whether he can win the event, but whether he can take down Chase Kalisz‘s legendary American record of 3:33.42 in the final season of his collegiate career. DeVine’s athletic career has recently started to take off this year, as he’s made two straight major international teams for the U.S. in the long course 200 IM. Perhaps as his professional viability has become further established, he’ll have the confidence to make a push for the record.

Mike Thomas, a senior from Cal Berkley, has the second fastest lifetime best of anyone in the field with a 3:37.75. He earned that time in the B-Final of last year’s NCAAs, where he finished 10th overall behind Florida’s Mark Szaranek. Last year’s 400 IM field was the fastest it’s ever been in history – it took a 3:39.52 to make top eight, and there were four people who went under 3:40 in the morning who didn’t make the A-Final. One of those was Szaranek, which was noteworthy as he finished third in the event the year before with a 3:36.13, a time that would have finished second overall.

Thomas’s swim in the B-Final would have also earned him second in the championship final. It was also a substantial drop from his 3:41.14 preliminary time. Given that the field is overall much slower than last year, Thomas could likely afford to swim about as slow as he did last year and still retain the opportunity to make a huge nighttime drop for a top three finish. He’s currently seeded #2 coming into the meet with his 3:39.83 from Pac-12s.

Behind DeVine, Michigan junior Charlie Swanson returns as the second highest placing swimmer in the event (he placed sixth at last year’s NCAAs), as well as the #1 seed heading into nationals with a 3:39.58. Throughout the 2018 post-season, Swanson was remarkably consistent – he first cracked 3:40 to win the event at Big Ten’s, and then proceeded to swim two 3:39s during both the preliminary and finals session at NCAAs.

Swanson has now won three straight conference titles in the 400 IM. Combined with his A-Final experience from last year – on top of a largely unproven field – he’s poised to firmly establish himself as a force to be reckoned with at the top of the national stage.

Finishing second to Swanson at this year’s Big 10 Conference Championships in this event was his teammate Ricardo Vargas Jacobo. Although he has been relatively calm throughout the first half of the NCAA post season – save his new personal best in the 1650 – RVJ has been on a tear across the course of the regular season. He consistently outpaced distance ace Felix Auboeck in dual meets, posting some ludicrously fast times such as a sub 4:20 500, as well as many sub 9:00 1000s; all of which were done in briefs.

Although the 400 IM isn’t RVJ’s speciality, he heads into the meet as the #5 seed with his 3:40.24 from Big 10’s. With the prospects of him having a breakout swim in the 500 on night two seeming really good it’s likely he could carry over that momentum into the 400 IM on the following day.

Speaking of talented milers, Florida’s Robert Finke has been having a phenomenal freshman season. At SEC’s, Finke won the men’s mile by over 12 seconds, clocking a 14:23.01 to post the fifth best mile of all time. He also won the 400 IM at the same conference meet, recording a time of 3:40.94 to set himself up as the #6 seed coming into NCAAs.

Whether you’re talking about the mile or the 400 IM, it’s hard to put stock into freshman without NCAA experience – especially after achieving huge time drops a couple weeks before – but Finke is just too good to ignore. Moreover, he’s a member of the U.S. National Team and swam the 1500 at the 2017 FINA World Championships, so he has experience competing against the upper echelon of the sport.

Regardless, Finke is going to be a major player in both the collegiate and international spheres of competition – he’s certainly capable of getting some championship final experience in his NCAA rookie debut, if not something greater.

Virginia’s Ted Schubert has been an interesting figure in the 400 IM scene. After DQing in the preliminary heats of last year’s ACCs, he cracked 3:40 for the first time in a time trial later that night, recording a 3:39.52 to shave six seconds off his former best time. With that swim qualifying him for NCAAs, the then-sophomore would go on to dip below 3:40 again in the prelims of the 400 IM at nationals to qualify for the B-Final, ultimately going on to place 14th.

Schubert is currently seeded at #21 with a 3:42.59, but considering that he is the only other returning finalist with a best time under 3:40 – and that he isn’t coming off of a major drop from his lifetime best at conference – he’s definitely in contention for a top eight finish.

Former world junior record holder in the long course version of this event, California’s Sean Grieshop, seems to finally be coming into his own as a Golden Bear. The sophomore sits at #9 on the psych sheet with his 3:41.17 from Pac-12s, which erased his former best time and earned him third place overall.

Last summer, Grieshop qualified for the 2018 Pan Pacific Championships in the 400 IM, which marked his first major senior international team, likely giving his confidence levels a big boost. After earning valuable NCAA experience as a freshman, Grieshop is poised to transition from a then-age group phenom to collegiate star power.

Seeded right behind Grieshop is Florida freshman Kieran Smith with his 3:41.50 from SECs to take the runner-up spot behind Finke. Smith has been tearing it up throughout the duration of the regular season for the Gators, posting some eye-catching dual meet times across his standard, yet brutal 200 back/200 free/200 IM triple.

Like Finke, but on a slightly smaller scale, Smith has experiencing competing at a high level. He made the U.S. National Junior Team in 2017, and made the championship final in the long course 400 IM at the 2018 Phillips 66 National meet. Although there’s really no way to gage what kind of shape he’ll be in come NCAAs – especially after such a successful conference meet – the kid is a talent to look out for in the future, and could even make his first championship final come this week.

Another potential championship finalist is Virginia senior Brendan Casey. He currently sits as the #3 seed at 3:39.93 from ACCs; a big drop from his 3:41.94 from last year’s conference meet. After finishing 22nd in this event at the previous national meet, he’ll be looking to cap off his senior year with a first time finals appearance.

Casey is a highly accomplished open water swimmer, as he qualified for the 2018 U.S. Open Water National Team. Given that Open Water Nationals are in May, which he will likely compete at, it’s difficult to say what kind of shape he will be in come NCAAs.

“Whether you’re talking about the mile or the 400 IM, it’s hard to put stock into freshman without NCAA experience – especially after achieving huge time drops a couple weeks before – but Finke is just too good to ignore.”

I think he has more in him honestly. After he dropped a 14:55 at Nationals this past summer, he backed it up with another huge drop of 14:48 at Pan Pacs. He has a decent shot in the 4 IM at NCs and I don’t see anyone touching him in the mile.

What about Brendan Casey? He had a great swim at ACCs and has a very good chance of placing high in the A-final

Yea. He really put it together this year in the pool after several years of success in open water. He should A final.

Casey just hit three lifetime bests at ACCs. With open water nationals coming up in early May, I wonder if he may not be primed to peak again at NCAAs. But you never know with distance swimmers.

Can we get Carson Foster eligible for this week?

The brothers of steel are going to be bring the rain to the NCAA. The longhorns have Brisket and sweet tea ready boys!

No respect for Schlicht