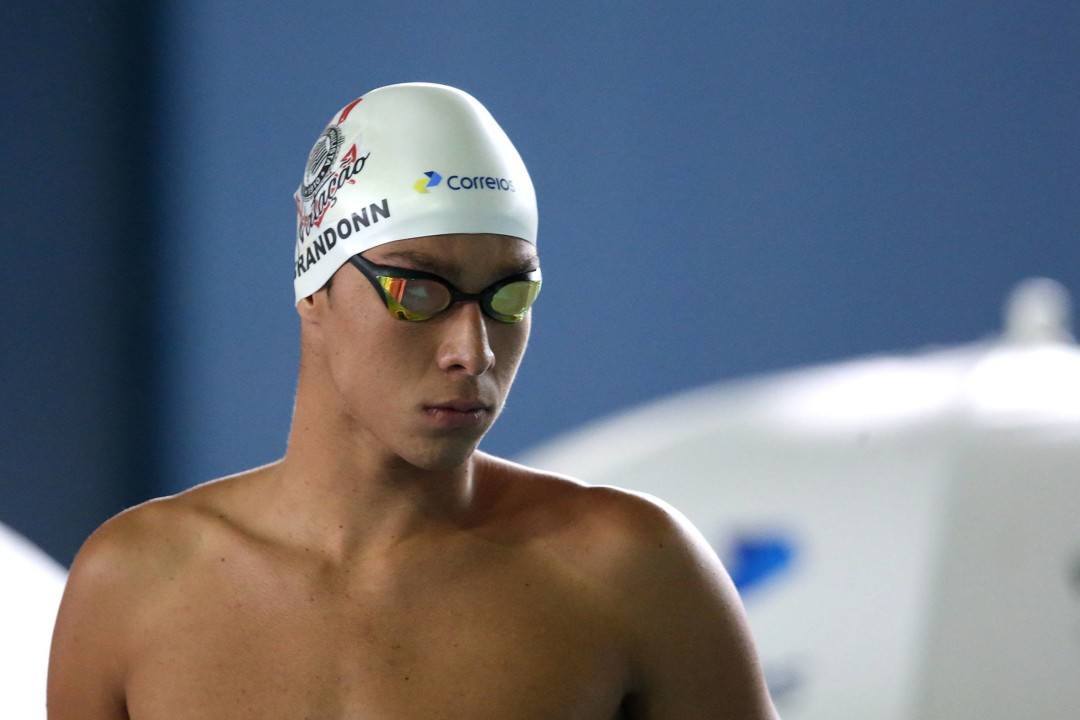 After missing most of his freshman season due to an eligibility issue, the sophomore former NCAA finalist Almeida is heading home to train for Tokyo 2020. Archive photo via Satiro Sodre/SS Press

Almeida, 21, missed the majority of his freshman season due to issues with his NCAA eligibility paperwork. He made his South Carolina debut at the Virginia Tech Invite in February, where he won every event he competed in, and was named SEC Male Freshman of the Week.

He’s still listed on South Carolina’s 2018-2019 roster, but head coach McGee Moody confirmed to SwimSwam that Almeida was never on campus this year:

“I can confirm that Brandonn has returned to Brazil.  He was given a very good opportunity to further his swimming career professionally.  He has been in Columbia and has struggled with the decision for some time.  After spending weeks talking though the sitatuion, it was decided that this was a great opportunity for him and his family.  Brandonn will always be a part of our team and we wish him the best of luck and will be his biggest fans moving forward.”

Prior to his collegiate career, Almeida was a 400 IM finalist at the 2017 FINA World Championships, Olympic qualifier for Brazil in 2016, World Junior champ in 2015, and former World Junior record holder.

According to Globo, he will train with his Corinthians coach Paulo Augusto Prado in preparation for Tokyo 2020. Almeida’s distance coach at South Carolina, Mark Bernardino, notably vacated his role with the team after the 2017-2018 season to join NC State as an assistant coach.

The SEC is now without two major international swimmers in the men’s field, as fellow 400 IMer and 2018 SEC champion Hugo Gonzalez (who had already transferred to Virginia Tech) similarly went back to his home country of Spain early in the school year.

In addition to the vacancies left by Gonzalez and Almeida, four members of last year’s SEC men’s 400 IM A-final graduated in 2018 (including South Carolina’s Tomas Peribonio). Texas A&M’s Benjamin Walker and Austin Van Overdam are the only potential returners.