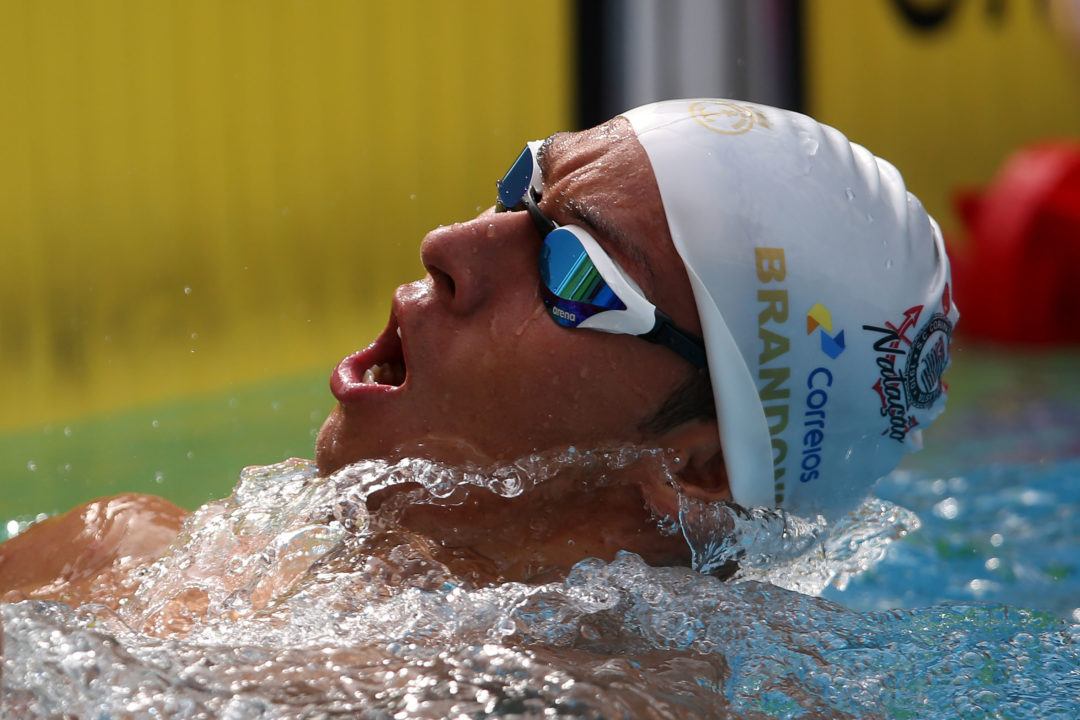 A representative from South Carolina's athletics department says the school is confident Brazilian star Brandonn Almeida will be eligible to compete during the spring semester. Archive photo via Satiro Sodre/SS Press

A representative from South Carolina’s athletics department says the school is confident Brazilian star Brandonn Almeida will be eligible to compete during the spring semester.

Almeida, an Olympian, World Junior champ and former World Junior record-holder, is potentially a massive pickup for the Gamecocks. He verbally committed to South Carolina last fall, and though he’s appeared on the team’s roster all season, he hasn’t yet competed in the NCAA.

A source told SwimSwam earlier this fall that Almeida was still dealing with NCAA paperwork to determine his eligibility and official year in school. The school told us this fall that there was no information about his status, but finally this week said that Almeida and the school are “working through one final process with the NCAA” and that the program is “confident Brandonn will be swimming and competing with us in the Spring semester.”

An eligible Almeida would be a huge boost to South Carolina’s NCAA viability. Based on his long course meters times, Almeida could be a potential NCAA A finalist in the 1650 free and the 400 IM. Of course, long course times don’t always translate perfectly to the short course pool, but Almeida has also spent the fall training with a South Carolina program that has excelled recently with distance freestylers.

South Carolina has already wrapped up its fall semester schedule. The team’s next meet is set for January 13 on the road against East Carolina. There’s no word yet on a timeline for Almeida’s NCAA debut.

He failed first 2 years of college in Brazil .

I was thinking it might be about getting paid for swimming. I’ve heard at a certain level in Brazil the clubs will pay you to swim for them. Since the culture there isn’t geared toward NCAA it would be easy for a young prodigy to just accept it. Plus with all we know about Brazil, corruption is their middle name.

Still hope he can compete. I hate NCAA rules, that would be pros aren’t paid accordingly, or that they have to go to school at all. School is a joke. System is a joke. Capitalism is a joke. I just wanna see some fast swimming man!!!

Tammy, kids can definitely swim fast without going to college. However, if you represent a college, you have to attend class and follow the NCAA rules.

Mcgee where you got that Information from? Even when making a huge search on Portugues I could not find any information of him going to College, much less failing it

He did went to college in Brazil. UNIP, he even swam the JUBS (something that kinda looks like NCAA fora Brazilians). He studied Physical Education, but he did not failed in a single class.

This man can swim fast. He should be eligible ASAP.

In Brazil, he is a professional athlete of the Marinha where he receives monthly salary, as can be seen no website below every month that receives

It looks like the NCAA now allows athletes to receive salary

In December, Brandonn had to go to Brazil to swim at the Open for Corinthinas Club and then the Military World for the Brazilian Navy