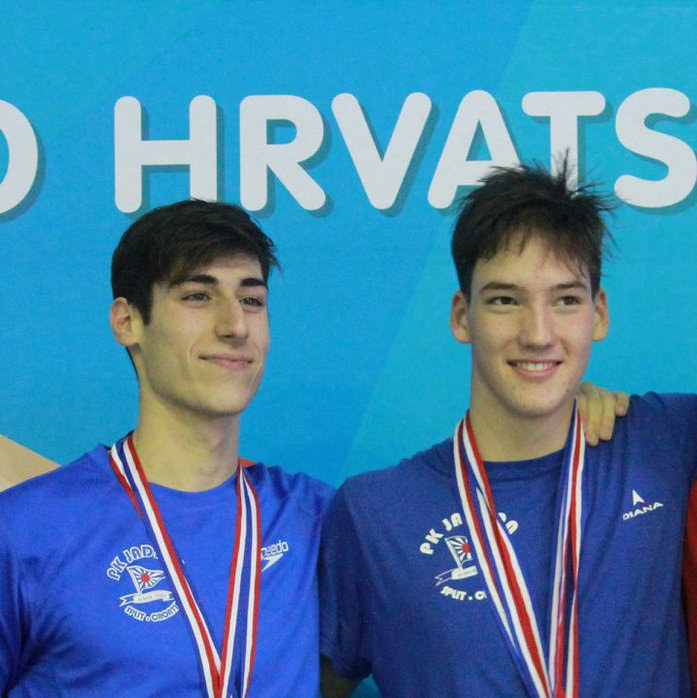 Franko Grgic of Croatia put up his 2nd fastest 1500m freestyle ever to crack a EYOF Record and carry home gold tonight in Baku. Archive photo via Croatian Swimming Federation

Dizotti became the first woman to qualify for Brazil’s 2021 Olympic roster in an individual, pool event after breaking the National 1500 free Record tonight.

Charlotte Bonnet is heating up in her early-year swims in the 200 free, swimming another sub-1:58 over the weekend in Lyon, France.

Beatriz Dizotti broke the Brazilian Record in the women’s 1500 free on Thursday to book her first Olympic qualification.

2021 Belarus Open Day One: Shymanovich Qualifies for Tokyo with 58.77 BR

Belarusian Ilya Shymanovich has qualified for the Tokyo Olympics with his 100 breast World No. 6 swim of 58.77, clearing the automatic cut of 59.93.

Aisling Allen will bring scoring times in distance free, 200 fly, and IM to the GLVC when she suits up for Drury next fall.

More than three-quarters of voters predicted that Dressel would make the Olympic 4×200 free relay, with 16.8% more picking Dressel to make the 200 free.

Day 2 of the European Youth Olympic Festival kicked off with another meet record, this time courtesy of Russian backstroker Aleksei Tkachev. Tkachev had already lowered the mark in last night’s semi-finals en route to taking top seed, but he sealed the deal for gold this evening in Baku with a final time of 55.22.

Runner-up status went to Hungary’s Hubert Kos, who touched in 56.36, while Belarusian swimmer Ivan Adamchuk got the job done for bronze in 56.78.

Aleksandra Sabitova followed the record-breaking trend, setting a new EYOF mark in a time of 55.58 to take the women’s 100m freestyle gold tonight. Splitting 26.80/28.78, Sabitova’s time wasn’t too far off her personal best outing of 55.38 logged for bronze at this year’s European Junior Championships.

Great Britain’s Tamryn Van Selm improved on her 8th place finish in this event at the Europan Junior Championships with a silver medal-worthy performance tonight. The Bromley teen wrangled runner-up in 55.61. That sliced .05 off her previous PB of 55.66 produced at this year’s British Championships.

Spanish youngster Carmen Weiler finished in a time of 56.25 for bronze.

Croatian Franko Grgic doubled up on his gold medal from last night’s 400m free with a solid performance in the 1500m tonight for another podium-topping result. Grgic hit the wall in a winning effort of 15:04.75, the 2nd fastest swim of his young career.

Swimming at the 2019 Croatian Team Championships in March, Grgic swam a 14:56.55 in the 1500m free. That time broke the old Croatian Record of 15:04.45 and made him the country’s first-ever swimmer under 15 minutes in the event. The 16-year-old’s time tonight wasn’t too far off of that history-making record.

Grgic’s time tonight checks-in as a new EYOF Record, completely crushing the previous meet standard of 15:24.02 from Spain’s Cesar Castro back in 2015. We’ll have to see how Grgic’s time would have fared at this year’s World Championships, once the event transpires in Gwangju.

British breakthrough star Katie Shanahan captured her 2nd gold in as many days as well, adding a 200m back top prize to her 400m IM victory from last night. The 15-year-old touched in 2:11.20 tonight to take down the previous EYOF Record of 2:11.57 set by Russian Daria Vaschina in 2017.

Shanahan’s time also outperformed this year’s European Junior Champion Erika Fransesca Gaetani of Italy, who had to settle for silver in 2:12.03 tonight. She was a much faster 2:10.28 in Kazan.

For Shanahan, however, her outing tonight destroys the teen’s previous personal best of 2:13.68 registered just this year at the British Swimming Championships. Her time establishes a new British and Scottish Age Records for 15-year-olds in the 200m back, as well as moves the City of Glasgow swimmer into the 21st slot among all-time British performers at any age.

A Turkish Senior National Record went down tonight in the form of Beril Boecekler‘s podium-topping performance in the women’s 400m free. Boecekler had just established a new Turkish mark of 4:10.41 while competing at the European Junior Championships where the 15-year-old took silver in the 800m and 1500m free.

Tonight, however, Boecekler pumped out the first sub-4:10 performance of her career, touching in 4:09.71 to log a new EYOF Record. Her time tonight crushed her 4:13.59 put up in the prelims.

Boecekler’s outing beat the competition handily this evening, with British teen Freya Colbert touching over 6 seconds back in 4:16.58, while Russia’s Margarita Varulnikova finished in 4:17.15 for bronze.

To end the night, the British foursome of Jacob Whittle, Edward Mildred, Van Selm and Evelyn Davis produced the winning mark in the mixed 4x100m free relay, collectively clocking a gold medal-worthy 3:32.48. That time also checks-in as a new EYOF Record, with 14-year-old Whittle leading off in a mighty 50.45. Whittle is the Derventio Excel teen who wowed at European Juniors with a sub-50 time of 49.97.

Through 2 days of competition in Baku, Croatia dips down to 3rd place in the overall medal table, overtaken by Great Britain and Russia who now sit 1 and 2. Britain holds a 1 medal lead over Russia, carrying 6 medals into day 3 to Russia’s 5, although they both have 3 gold medals apiece at this point.

Swimming Medals Through Day 2 of EYOF

Great to Shanahan have the opportunity to prove herself in the 200 Back, having been unable to qualify for the semis at the European Juniors by the “only two go through” rule.