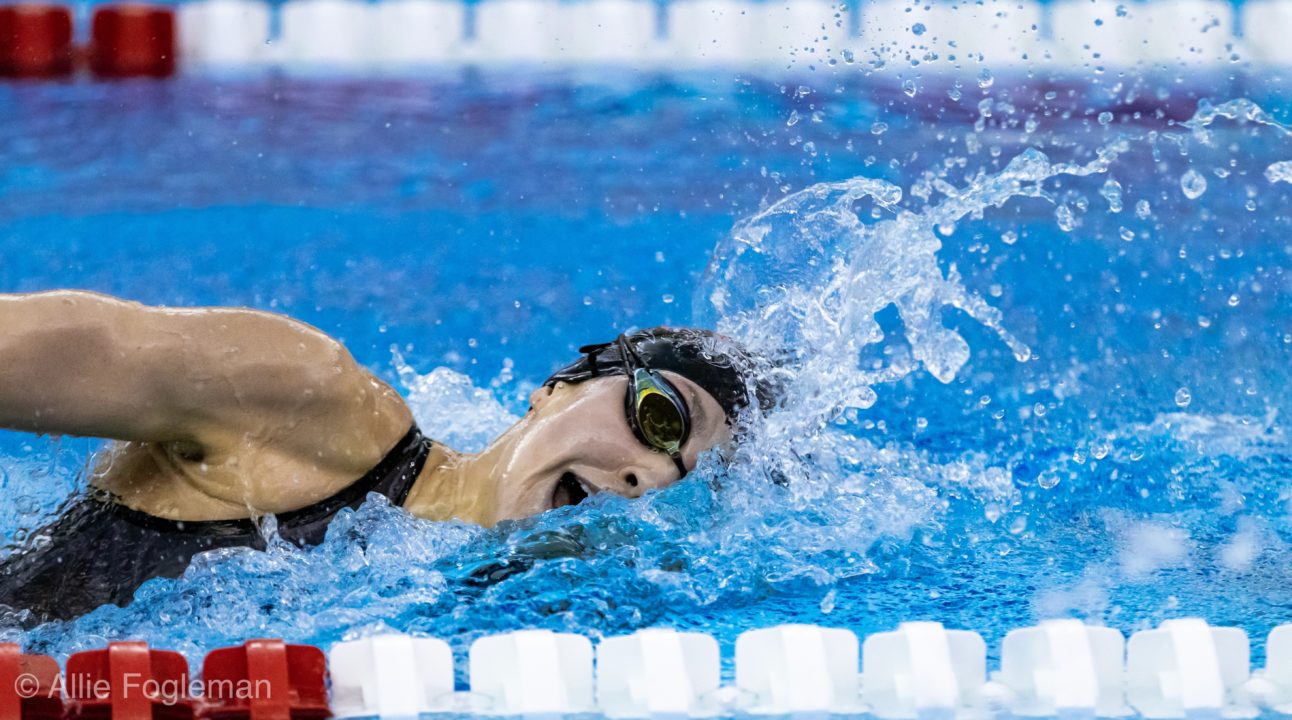 Hannah Moore is the top seed on the women's side, looking to win her second-straight PSS meet in this event. Moore beat Chile's Kristel Kobrich by seven seconds in Richmond. Archive photo via Allison Fogleman

The fourth of five stops on the 2019 Pro Swim Series begins tonight in Bloomington, Indiana, with timed final heats of the men’s and women’s 1500 frees.

Hannah Moore is the top seed on the women’s side, looking to win her second-straight PSS meet in this event. Moore beat Chile’s Kristel Kobrich by seven seconds in Richmond. Kobrich is the second seed tonight, while Knoxville champ Katie Ledecky isn’t swimming the event and Des Moines champ Wang Jianjiahe is not competing in Bloomington.

For the men, we’ll get a new mile winner for the first time this series, as Knoxville/Des Moines/Richmond champ Anton Ipsen is absent. Zane Grothe is the top seed, and he’s been third at the past two meets. Meanwhile Marcelo Acosta was the runner-up in Richmond, and he’ll also be competing tonight.

Hannah Moore rolled through the opening heat for NC State’s Wolfpack Elite club, going 16:11.42. That’s a season-best for Moore, about two seconds faster than she went in winning this event in Richmond last month.

Chile’s Kristel Kobrich is running second – she was the runner-up in Richmond. Kobrich held off Becca Mann for second, besting Mann by two seconds. From there, things dropped back to Big Ten duo Sierra Schmidt (Michigan) and Cassy Jernberg (Indiana), with two heats to go.

Zane Grothe is in line to get his first 1500 win of the series, going 15:17.12 to win the opening heat tonight. That time is actually slower than he went in Des Moines back in March (he was 15:13), but is much better than his Richmond swim last month (15:26). Grothe did go 15:05 at this time last year, so he’s a little off that. But his time tonight is similar to what he went a few times in-season last year before going 14:48 at the end of the summer.

Marcelo Acosta sits second, and could get his second runner-up finish in a row in this event. Acosta was 15:28.66, holding off Michigan’s Ricardo Vargas by two seconds. Indiana’s Mikey Calvillo sits fourth, with another Michigan swimmer, Will Roberts, close behind.

Why would the discussion here be around tapering? I’d say that a large majority of the swimmers at these TYR Pro meets are not rested and use them as training meets.

Well for the IU pros it is a home meet which is always great to go fast at home. It is also about 2 months out from the pan American games so it’s about time to test the waters with some rest. Kinda like we have trials and then the meet a month or a month and a half later.

I believe it’s only Cody, Annie and one other tapering. I know Ian and Lily arnt