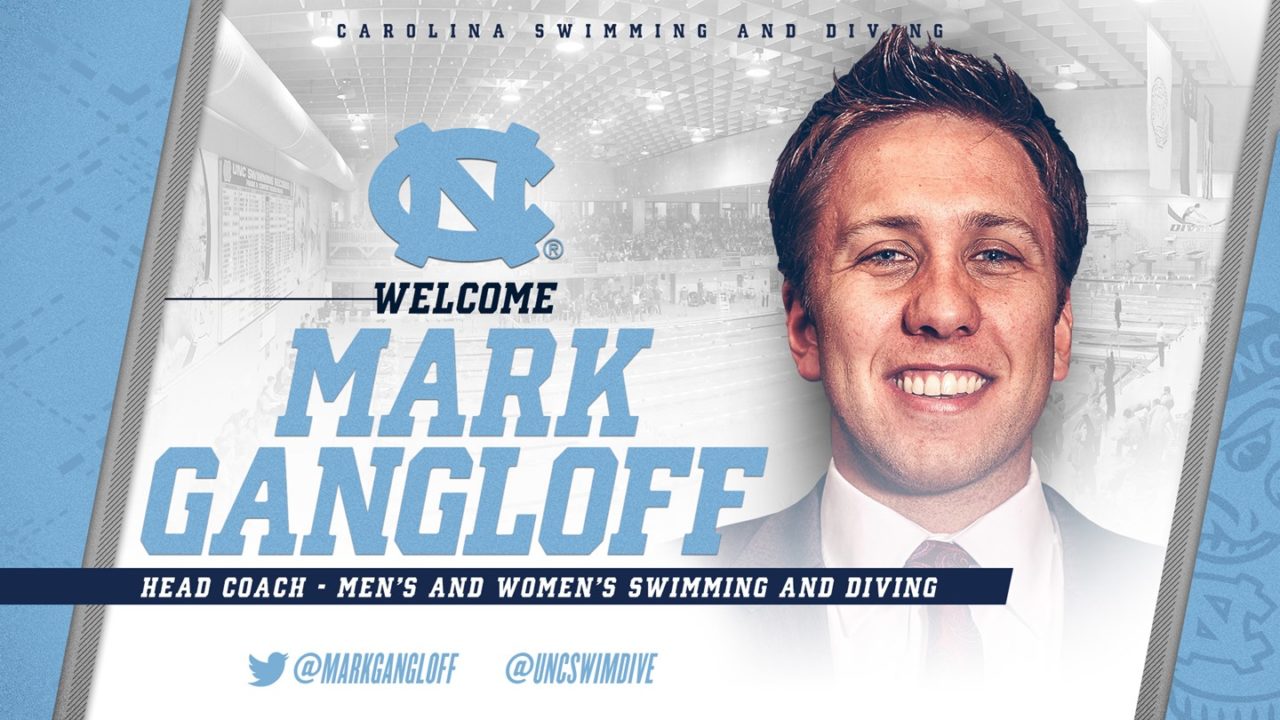 The University of North Carolina has hired Mark Gangloff to lead its men's and women's swim & dive programs, replacing the resigned Rich DeSelm. Current photo via courtesy of UNC athletics

Bubb joins the Owls after serving as the founding head coach of Midland University’s men’s and women’s swimming & diving programs.

The University of North Carolina has hired Mark Gangloff to lead its men’s and women’s swim & dive programs, replacing the resigned Rich DeSelm.

The move fills arguably the biggest head coaching opening still on the market, after Stanford hired Dan Schemmel earlier this week. Gangloff comes to UNC from Missouri, where he’s spent the past seven years on staff. Gangloff is best-known as a two-time U.S. Olympian, competing in 2004 and 2008 and winning gold medals with the 4×100 medley relay at both Games. He’s risen through the coaching ranks since then, working with the University of Missouri for seven years, and holding the title of associate head coach for the past two seasons.

The coaching situation at Missouri remains unsettled, though, as head coach Greg Rhodenbaugh is under a Title IX investigation, per local media. Gangloff and Andrew Grevers were both associate head coaches, and Grevers finished out the year as interim head coach. There’s still been no word out of Mizzou on Rhodenbaugh’s status, or a long-term change at head coach.

DeSelm had been with UNC for nearly 30 years, but resigned this spring after a cancer diagnosis.

The school announced Gangloff as head coach on Thursday. The full UNC press release is below:

CHAPEL HILL — Mark Gangloff, a two-time Olympic gold medalist and one of the most dynamic young leaders in the world of collegiate swimming, has been named the new head coach for the men’s and women’s swimming and diving programs at the University of North Carolina. Gangloff comes to UNC after seven years at the University of Missouri where he served as the Tigers’ associate head coach for the last two seasons.

“Mark Gangloff is greatly respected in international and collegiate swimming and diving and has a passion for coaching and developing student-athletes,” says UNC Director of Athletics Bubba Cunningham. “His swimmers have demonstrated improvement and success, and he is known for his ability to relate with and motivate student-athletes.

“He’s an Olympic gold medalist, captained a national championship-winning team at Auburn and a number of USA Swimming teams in international competitions, and has developed swimmers at Missouri for the past seven years. We look forward to Mark taking our men’s and women’s programs to another level in the years to come.”

“I would also like to thank the University of Missouri, its tremendous coaches, and its administration for helping me to grow as both an individual and as a coach.

Gangloff for the win!!!

Like I said, UNC was taking it’s time to get a great coach. Oh, by the way, two of their coaches from this year’s team joined Deselm by leaving.

Who besides Sean Quinn left already?

Michael Blum to Gardner Webb. Got it. Hopefully Christy will stick around / be kept.

Not sure this is a ‘win’ for him

Great hire!! Wonder what will happen at Missouri…….

As much as I know of American college life and the American coaching pool, there is a good chance that excellent coaches will step up and fill shoes in Mizzou and Hawai’i.

Will be nice to see the program rise

Agreed, it will take a few years – especially on the men’s side. The attrition, transfers & medical retirements have really taken a toll on the numbers and talent. It’s a shame, but hopefully this is the turnaround they need to to re-energize the program and get UNC back to being competitive in the ACC. Best wishes to Mark!

Finally…nice! ACC will continue to rise

He definitely got a chuckle out of me there too

UNC has numerous programs ranked among the best in the country. But keep telling yourself that. Whatever helps you sleep at night…

I don’t know why it devolves to this. The deltas between major state schools in this country are so slim – yes there are rankings, yes certain schools have strengths or weaknesses or certain stand out alumni or lecturers, but ultimately, for the 98%, you’re getting about the same education at all of them.

That’s just not true… I know you said 98% to kind of cover yourself here, but are you saying Michigan, Virginia, and Berkeley are giving the same education as (and sorry if I pick on your state or school here) Nebraska, Kansas, Arkansas, Nevada, New Mexico, Rhode Island, UTEP, Oregon, Idaho, Maine??… I could keep going, but I was trying to name schools without a men’s swim team.

I Would think so. How much different could Calc 1-3 be at UC Berkley than at U of Maine?

For those schools that actually hold classes, yes…

So good, you dont even need to go to class!

Pretty this comment has to do with all of the alleged/confirmed academic scandal and lack of consequences?

Wonder no more: it is a fact that UNC has a culture of excellence.

Terrific hire. Heels will begin an ascent now. ACC is shaping to be the best NCAA swimming conference in the next decade. Heels will need to raise their game to get in the mix & I think they will.

This is a FANTASTIC hire. Having had the extreme privilege to assist in coaching Mark in this preparations for the 2008 Beijing games he is an absolute pro, both as a swimmer and as a coach. I have no doubt he’ll raise the standard at UNC. The ACC is getting hot!

Here’s Mark on the podcast a few years ago: https://rittersp.com/podcast/mark-gangloff-talks-olympics-coaching

Been listening to your podcasts today after you posted about them yesterday. I really enjoy them! Keep it up Chris