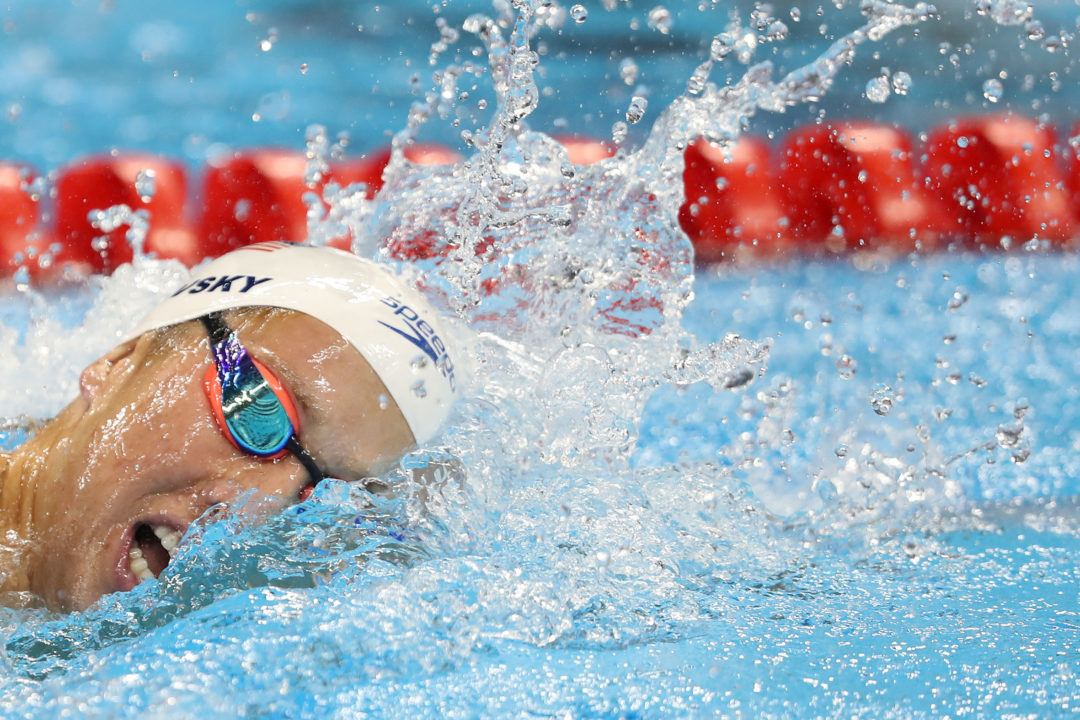 Is the United States ready to compete for international medals again in the men's 1500 freestyle? Archive photo via Simone Castrovillari

With the departure of now-retired Connor Jaeger – who won back-to-back silver medals in the 1500 free at the 2015 World Championships in Kazan (14:41.20) and 2016 Rio Olympics (American Record, 14:39.48), American distance swimming on the men’s side has been looking for a consistent medal threat on the international stage. There are plenty of hopefuls, but nobody yet who has exerted himself as the frontrunner to compete year-after-year. On paper, the nod has to go to Jordan Wilimovsky as he has the fastest time of any American swimmer currently competing (14:45.03) – which also happens to be the 2nd fastest performance of all time by an American, ahead of the greats like Larsen Jensen, Peter Vanderkaay, and Erik Vendt.

However, Wilimovsky is primarily an open water specialist – with 3 World Championship medals to his name in open water events. The 24 year-old took most of 2017 off from pool competition to focus on open water training and racing, which paid off as he picked up a silver medal in the 10km at last summer’s FINA World Championships in Budapest. Wilimovsky, who finished 4th in the 1500 free at the 2016 Olympics (14:45.03), has looked strong in his return to pool racing this year – posting times of 3:51.48 in the 400, 7:58.10 in the 800, and 15:11 in the 1500. But is it strong enough to fend off the momentum of Zane Grothe?

Grothe is still a bit of a wildcard in this event. His two fastest recorded times ever have both come this year in mid-season meets with a 15:08 at the Mesa Pro Swim Series in April and 15:05 at the Indianapolis Pro Swim Series in May. His general upward trajectory, including the fastest-ever 1650 yard free in December – lends credence to the notion he has more in the tank – but just how much? Although Grothe is the hot hand, it’s difficult to warrant picking him over Wilimovsky for the sole reason he has a lifetime best that is 20 seconds slower (15:05 to 14:45). The biggest two questions to factor here are: is Wilimovsky in a place with his pool swimming to approach 14:45? Does Grothe have the potential to get down to that time? Odds are, we will meet somewhere at the intersection and these guys will duke it out somewhere in the 14:50 – 14:55 range.

There will be plenty of challengers to Wilimovsky and Grothe in Irvine, though. Most notably, Stanford’s True Sweetser – the 2017 U.S. National Champion and only swimmer other than Wilimovsky in the field to crack the 15-minute barrier. The 20-year old wasn’t quite able to replicate his Nationals performance at the World Championships in Budapest – finishing in 16th with a 15:07.38. But hey, the guy is a workout warrior (with Katie Ledecky, no less) and has a rumored work ethic that would have fit in with Mark Schubert‘s Mission Viejo “animal lane” born in the 70’s with greats Brian Goodell and Shirley Babashoff. NBA Hall of Famer Allen Iverson might say, “we talkin’ about practice?” – but Sweetser has proved it in competition as well. This summer’s will be a little more stiff domestically, though.

After that, there is a trio of teenagers with Robert Finke, Andrew Abruzzo, and Michael Brinegar who are positioned to be the next generation of American distance stars. The early leader of this pack is Finke. The 18 year-old Florida commit popped off a 15:01.31 at last summer’s U.S. Nationals to pick up a 2nd place finish behind Sweetser and earn a berth on the World Championship team. Like Sweetser though, he wasn’t quite able to replicate his Nationals performance in Budapest – finishing 21st in 15:15.15. Next up is the 18 year-old Georgia commit Abruzzo, the 2017 World Junior Champion (15:06.48) who finished 4th at last summer’s U.S. Nationals (15:07.97). Among this group, he has the fastest season best (15:13). Last, but not least, is 18 year-old Indiana commit Brinegar. Following in his mother Jennifer’s footsteps (a 1976 U.S. Olympian), the Indiana native ventured out west to train with Schubert in California. Since that move in the fall of 2016, Brinegar has catapulted from a 15:37 all the way down to a 15:09.

Rounding out the field is a pair of veterans with Logan Houck and PJ Ransford who are just on the cusp of breaking out to make a major international team. Houck, a rising Harvard senior, had been floating consistently around the 15:15-15:20 range for a couple of years until last summer’s U.S. Open where he fired off a 15:01 – placing him squarely in the conversation as one of the top distance swimmers in the nation. Ransford, who recently completed his eligibility at the University of Michigan, is in a similar boat. Up until last summer, he had been floating in the 15:10-15:20 range for several years. Then, at Nationals, he threw down a gutsy back-half performance for 3rd place (15:01.82) to destroy his previous best of 15:09.

Don’t forget that JW was 4th in the Rio Olympics 1500m which I’d say rates him as a “pool specialist” too?
Check out the “Taking 5 with JW” article on Swim Swam as well.

That is mentioned in the article. Given his focus and level of success in open water compared to pool swimming, I’d say that makes him more of an open water specialist.

Here is a link to that article, by the way – https://swimswam.com/taking-5-with-jordan-wilimovsky/

Is the 1500 a fastest heat in finals race, or a prelim/finals race?

Meet letter says 800 and 1500 are timed finals with the fastest heat swum at night.

Logan Houck is a negative splitter. He is also a 6-beat kicker, chugging along lap after lap.

He comes on strong in the second half and picks off one swimmer after another. He’s fun to watch.

I’d like to see Finke and Abruzzo break 15 this summer. American men’s distance swimming in serious need of stars.

Confused as to why young swimmers to succeed gets down votes…

Also, Finke swam that 15:15 after burning a fever for several days.

Thanks for pointing this out! Wonder why he was still entered on the psych sheet then…

Finke is going to qualify for Pan Pacs and I don’t see Grothe being as strong in the 1500.

10
-4
Reply
Daaaave
Reply to  JP input is too short