Rowdy Gaines Gives Insight to NBC Coverage for US Nationals 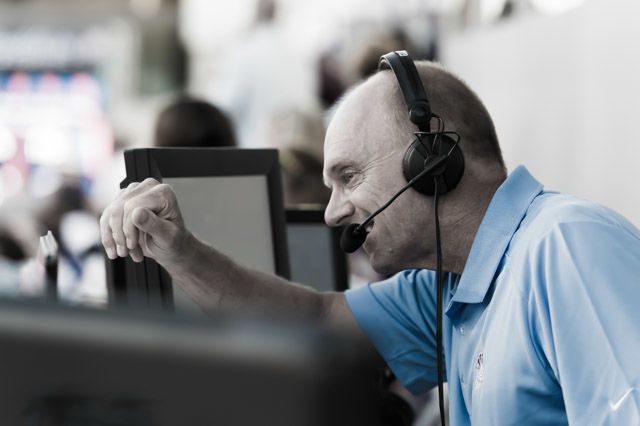 NBC's own Rowdy Gaines gave SwimSwam an exclusive interview on what exactly goes into a big production like US Nationals, and what his job looks like during the meet Current photo via Mike Lewis/Ola Vista Photography

“I like the way that USA Swimming has this because it put’s the pressure on the athlete to make sure they’re training in the middle of the quad. I think if they didn’t do that, you would be apt to, not take it easy necessarily, but back off on what you should be doing.”

NBC’s own Rowdy Gaines gave SwimSwam an exclusive interview on what exactly goes into a big production like US Nationals, and what his job looks like during the meet. Many are familiar with Rowdy as the voice of swimming and see him on deck at nearly every major meet, but what you may not realize is how much actually goes into Rowdy’s job at this high level competitions.

“We sit down every day, and we have a 3-hour production meeting, and we go over every single athlete. Name pronunciation, where they’re from, what club, what country. We do our homework. But, I tend to gloss over the other athletes and concentrate on, the Chase Kalisz’s, because I know Chase Kalisz is going to win. That’s the unfortunate thing about our sport is that, especially in a short race… you can’t talk about lane 7.”

US Nationals is part of the 2018 Team USA Summer Champions Series, presented by Xfinity, which consists of five events this year, concluding with the U.S. Gymnastics Championships Aug. 16-19. This nationals will be a qualifying meet for several international teams across USA Swimming, including 2018 Pan Pacs, 2019 World Championships, 2019 Pan American Games, and 2019 World University Games.

“One of the criticisms I get, and it’s justified in a way, is the fact that I never mention Sue over there in lane 8, and she had a best time. Well, we never see her! She could have had a best time, and she was there, but the camera never showed her. We have to talk about what’s happening in front of us… in front of you. So, this chance, I can say ‘here’s 13-year-old Sue Jones who’s over there in lane 8, and she just made the Pan Am team’, which is so cool for her. And that’s something I’ll be able to bring up a lot more during this meet than I ever have before.”

To grow the sport, we have to get away from the “taped-delayed” or obscure, virtually impossible online streams. There needs to be a more concerted effort to get the sport (and this includes NCAA Championships) more live air time to as many homes as possible.

Rowdy’s entered in the 50 free at the Pa Am Masters in Orlando on Sunday afternoon. Is that a ruse, or is he planning to skip out of the Nationals early and take a red eye back to FL?

What is the prelim schedule? I want to watch it all…every minute…every second.

Looking forward to it

Is there any way to stream coverage outside the US (UK specifically)?

I disagree with him on how difficult it is to talk about other swimmers in the heat- other countries’ reporters seem to have no problem and Rowdy spends a HEFTY percentage of the race talking about the favorite. It’s not relegated to their performance in the race, either; he’s well known to focus in on more peripheral information (things such as Ryan Lochte’s kid when Lochte is competing in a race). That time would seem better spent, at least to me, focusing on the “second-tier” athletes in the heat (e.g. anyone who isn’t winning/the favorite). However, I’m glad he’s receptive to criticism and seems to take it seriously.

Notice how Rowdy’s voice goes up about three octaves when a race gets close, esp. when an American catches up and passes a rival.

That comment is uncalled for and inappropriate – His voice only escalates 2 octaves and turns sharp…F sharp if I am not mistaken.

Rowdy gets way too much hate. I have never heard another commentator who has the passion and excitement for the sport more than him. Most others sound boring.

There are some exceptions. For example, I really enjoyed whoever did the day 1 stream for men’s ncaas this year and the boomshakalaka guy who is at other major national meets.

That guy over rowdy any day.

Rowdy will be the first person to explain that he’s calling races for NBC, for an audience of non-swimmers or swammers who not as in-touch with swimming. I think he’d release his inner swimNERD if he were calling for hardcore swimmers only.

But he doesn’t change the way he calls races when it’s SEC champs or NCAA champs when it’s exclusively a well informed audience tuning in. And his excuse of not having time to talk about the swimmer in lane 8 doesn’t hold up when he’s calling a 1650 and only mentions 2 names the entire race until the very end when a guy he thinks is getting lapped wins the whole thing.

When Ledecky was swimming the finals of the 800 in London he spent more time talking about Phelps (who (a) doesn’t even swim distance and (b) wasn’t swimming the event) than Ledecky or any of the other women in the heat.

Mel should do a live Swim Swam podcast so we don’t have to listen to 16-hours of “breathing to his right”. It would be nice for swimmers and swammers to have a swim junkie live podcast.

I do give Rowdy big props for coming out against PED doping in Rio.