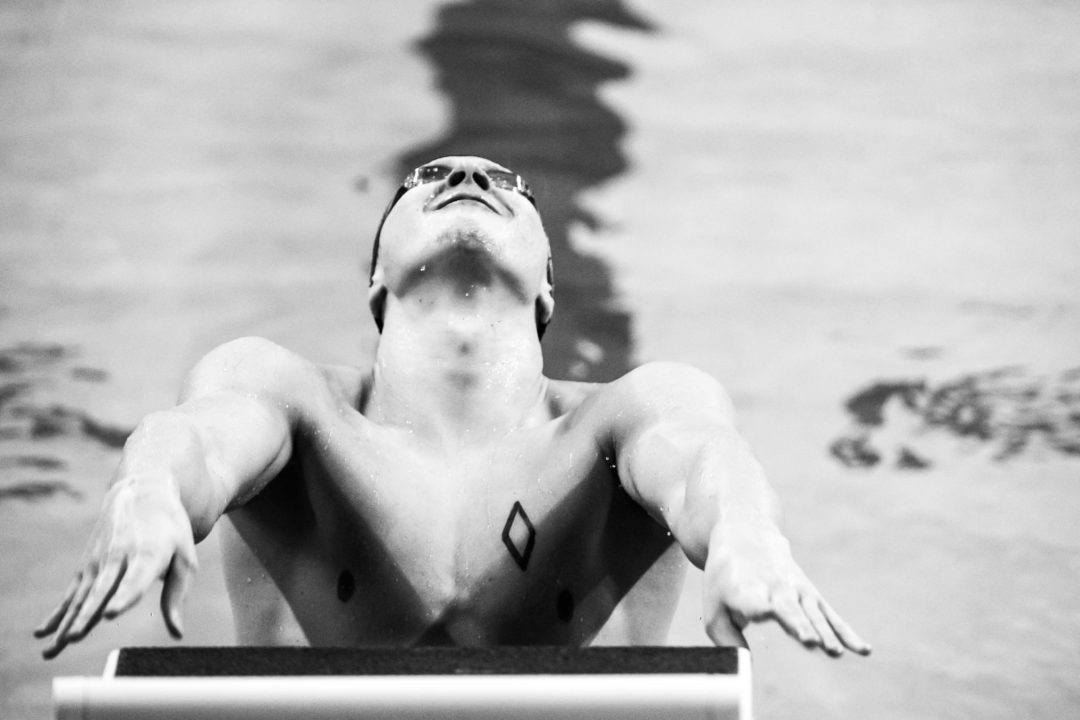 With a healthy mix of veterans and newcomers, the 50 back is still Justin Ress' to lose. Current photo via Mike Lewis/Ola Vista Photography

As the defending National Champion and 2nd fastest American performer of all time, Ress is certainly the favorite on paper going into the meet. However, a mixed bag full of veterans and newcomers will be gunning for the throne – including World Junior Champion Michael Andrew, omnipresent and age-defying Matt Grevers (reigning World Championship bronze medalist in this event), 100m backstroke World Record holder Ryan Murphy, and possibly a surprise contender in Ress’ NC State teammate and training partner Ryan Held – aka the “Spin Boss.” While there is not a lot of immediate value on the line in this event as it does not qualify for this summer’s Pan Pacs, it will still provide plenty of fireworks.

Day 3 at U.S. Nationals presents Michael Andrew an interesting dilemma – with arguably 3 of his best (or better, at least) events back-to-back-to-back in the 100 fly, 50 breast, and 50 back. The 100 fly seemed to be slowly falling off of his radar for international contention until he fired off a massive lifetime best of 51.86 at the Pro Swim Series in Columbus – the 2nd fastest time by an American this year behind a 51.00 from Jack Conger (Atlanta PSS, March). Andrew is the 4th fastest American ever in the 50 breast thanks to his recent 27.12 from the Mare Nostrum in Canet-en-Roussillon – which was just outside of the world top 10 for 2018. On top of that, he is the 5th fastest American ever in the 50 back with a 24.63 from last summer’s World Junior Championships (his 2018 best of 24.70 is the 6th fastest time in the world).

So, yes, it is fair to say a difficult decision lies ahead of him. As an avid pupil of USRPT, Andrew is no stranger to competing in (at a high level) multiple races in a session. Thus, it wouldn’t be a surprise to see him pick 2 of the 3 aforementioned events. Here is where it gets a little sticky, though. Andrew, now 19 years old and 5 years into a highly publicized professional career, has yet to qualify for a major senior-level international team (Olympics, World Championships, Pan Pac Championships). He even alluded to this at the Pro Swim Series in Columbus by bluntly stating, “50’s of stroke don’t qualify for Pan Pacs.” As someone who has had wild success in all 4 of the 50’s of stroke, it almost feels like Andrew is at a point in his career where he has to legitimize himself with a big swim in an Olympic event. Outside of the 50 free and 100 breast, that event is likely the 100 fly right now. Thus, it’s fair to predict he will go for the 100 fly, drop the 50 breast, and then take a stab at the 50 back as a fall back plan for qualifying for the 2019 World Championships (Remember: only 1 swimmer automatically qualifies for the 2019 World Championships in non-Olympic events).

While the spotlight might be focused on swimmers like Ress and Andrew over the 50 meter distance, it’s impossible to count out the backstroke greats in Grevers (3rd at 2017 U.S. Nationals) and Murphy (2nd at 2017 U.S. Nationals) – who have both proved time and time again that they show up when and where it matters most. Grevers is the 2012 Olympic Champion in the 100 back and Murphy is the 2016 Olympic Champ (and WR holder) in the same event.

The reality is that these 50’s of stroke are difficult to predict on merit alone. Anything can happen on any given day. It will likely end up coming down to whoever best executes the details – clean start, clean breakout, tempo, head/body position, properly timed finish, etc.

Just as it was considered a surprise last summer to see Ress pick up a victory in a backstroke event over the likes of Grevers and Murphy, we could easily see someone like Held or even Texas’ John Shebat get their hand on the wall first in Irvine. Get your popcorn ready, folks – this one is going to be exciting.

Going to be a very interesting decision for Michael. He’s almost already confirmed the 100 Fly for Nationals. 50 Breast, 50 Back both up in the air. He did say he is focusing on the 50 free, 100 breast, 100 fly and “stroke 50’s” so there’s no indication there whether he will drop one of those two. I think it is entirely possible he does all three but if I had to guess it would be 100 Fly, 50 Back as he might have a better chance in the back compared to breast because of Finnerty, Cordes, etc…

Update: He mentioned that he will enter in the triple but says it may change (via Instagram Stories).

We’re talking 48 low. It’s not like making champs will be easy because some of the big boys are gone. Blake, Held, Haas, maybe Conger, Andrew, Dressel, Adrian, don’t forget Jones and Ervin (fading slightly). I’m just saying it’s not a “huge problem” to go 48.9 for Andrew but it’s not like he’s swam that a ton AND it’s not going to be EASY to make it to any champs meet

Throw Ress into the mix on that one as well

Apple, Murphy, Rooney, Craig, Jensen, etc… We have a gazillion guys sitting right at that 49.0 mark that could break through.

who do you think could be a dark horse pick to make the a final?

Put my money on Coleman Stewart

I Would love for him to make the A final, he is a beast at underwaters, maybe the NC State staff can pull some magic to get him faster on top of the water as well.