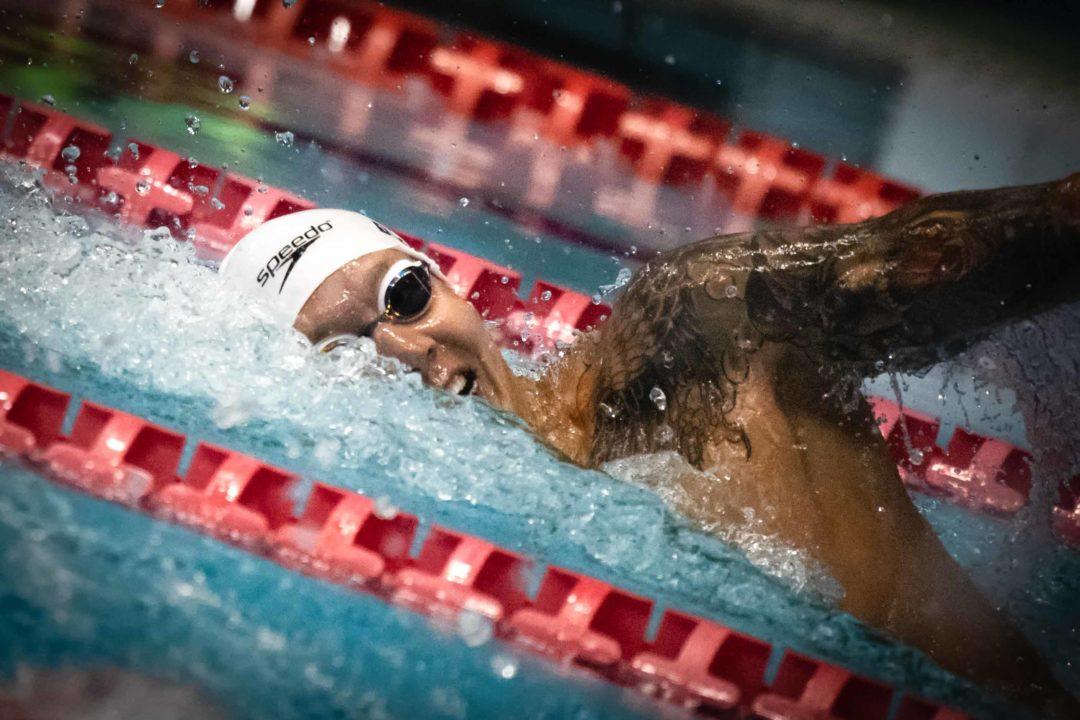 It’ll be Kelsi Dahlia versus the clock in the 100 fly, where in Katinka Hosszu‘s absence she took the top spot by over a second this morning (55.46). The world record sits at 54.61 and Dahlia’s been at fast at 54.84 this year, so consider the record on notice. The next five prelims finishers, including Dahlia’s USA teammate Kendyl Stewart, were within about three tenths of each other, so we should see a good fight for a podium finish.

Femke Heemskerk of the Netherlands led the pack of three women who broke 24 seconds and were all within .04 of each other this morning in the 50 free, going 23.90. The rest of the top-10 prelims finishers were under 24.25, including world record holder Ranomi Kromowidjojo (24.07, WR 22.93) and the United States’ Mallory Comerford, who is tied with Anika Apostalon (24.18).

World record holder Cameron van der Burgh will step up to the block in the 50 breast for what could be the final individual swim of his career; he was sixth this morning in a very tight prelims field with a 26.20. Belarus’ Ilya Shymanovich went the top prelims time of 25.97, followed by Brazilian teammates Felipe Lima (26.09) and Joao Gomes (26.11). Rounding out the top eight is Russia’s Kirill Prigoda, who was 26.25 this morning. Notably, the semifinals lack an American presence: Andrew Wilson (26.58) and Michael Andrew (26.62) missed the semis in 17 and 18th overall this morning.

Having scratched the 100 free this morning, we’ll likely see Brazilian sprinter Cesar Cielo anchor the 4×50 medley relay in what’s speculated to be the final race of his decorated career (final relay rosters have yet to be announced). Brazil was this morning’s top qualifier in 1:32.18, followed by Italy’s team in 1:32.20; Santo Condorelli posted this morning’s fastest anchor split of the morning by over a tenth on that Italian relay (20.59). The teams from the U.S. (1:32.37), Russia (1:32.40), and Germany (1:32.64) were all also under 1:33 this morning and will take aim at Russia’s 1:30.44 world record.

In the stroke 50s, another world record holder, Nicholas Santos, will eye his own mark in the 50 fly. His current record sits at 21.75 and he was 21.96 in prelims. In the women’s 50 back, American Olivia Smoliga (who already won the 100 back) will try for another gold after leading the semis field by a couple tenths.

Japan’s Daiya Seto was under world record pace at the 300-mark of his 400 IM this morning, cruising through the freestyle leg for a final time of 4:00.50 – he may have a shot at Ryan Lochte‘s world record of 3:55.50. Behind him, the next five swimmers all touched within a second of each other, setting up another potential showdown for the silver and bronze spots.

Youngster Ariarne Titmus came roaring back over Russia to take the top spot for Australia this morning in the women’s 4×200 free relay – she was the only swimmer under 1:54, posting a 1:53.53 anchor split. Russia put together the second-fastest time in 7:41.24, and the U.S. took the third spot in 7:44.64. However, with the likely substitution of Mallory Comerford – who was 1:51.81 in her individual race – you can expect the U.S. to be much more competitive in finals.