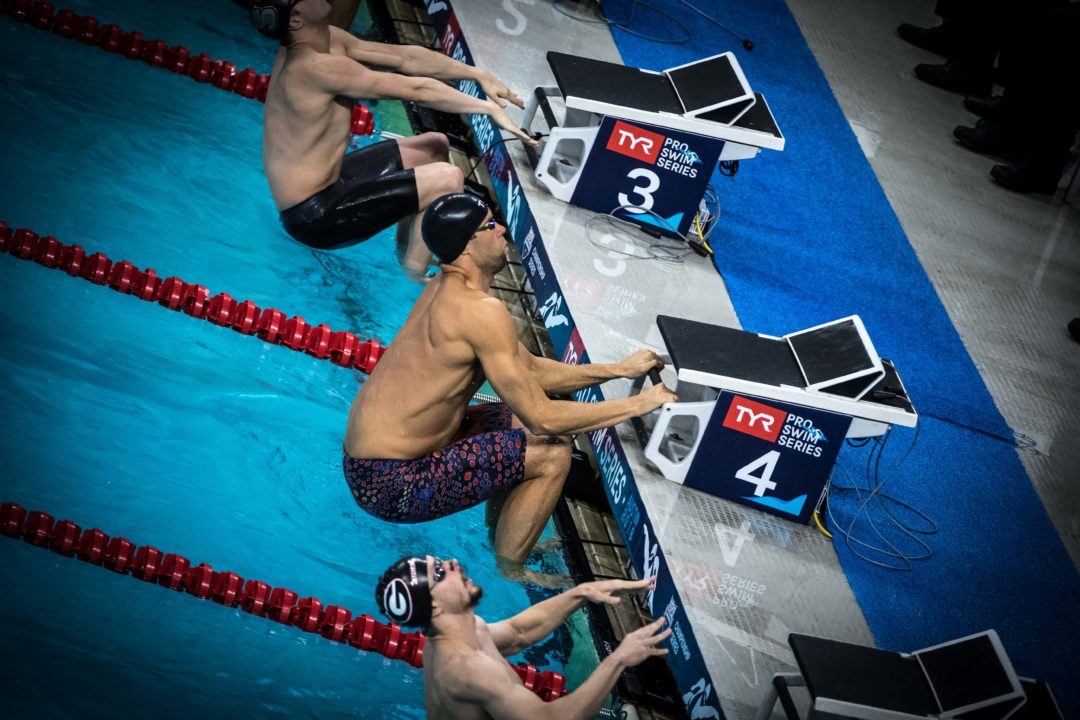 Matt Grevers is back in action in Mesa. Can he keep Team Krayzelburg atop the SwimSquad points standings? And can Team Lezak cobble together a backstroker out of spare breaststrokers in time? Archive photo via Mike Lewis/Ola Vista Photography

Most of these teams are going to have relatively full-strength lineups in Mesa, after the widely-expected absences of most college stars during the first two stops. Only five of the top 20 picks are missing: #9 Katie Ledecky, #11 Lilly King, #12 Caeleb Dressel, #14 Simone Manuel and #20 Jack Conger.

That said, there are still some rosters strapped for starters. Team Krayzelburg leads the points, but has a meet-low 8 swimmers active in Mesa. Still, Lenny’s lineup fits together awfully well, in contrast to the unfortunate black hole that is Jason Lezak’s backstroke spot.

Krayzelburg only has eight active swimmers in Mesa, but they coalesce very well in this lineup format. The addition of the 50 stroke shootouts is a boon to Krayzelburg, too, with high-level sprint-types in all four strokes.

He’s basically got two options at almost every spot, the exception being the IM spot that should be Chase Kalisz‘s every month after he was drafted #1 overall. At backstroke, Krayzelburg can use Matt Grevers or Olivia Smoliga – both were second in the 50 at Austin and were big scorers in the 100 as well. The one who doesn’t start probably starts as Krayzelburg’s flex play.

Kelsi Dahlia (formerly Kelsi Worrell) is the best fly option. Abbey Weitzeil is probably the best free option. Amanda Kendall seems second-best at both, but its possible we see her take over free for Weitzeil or perhaps contend with one of the backstrokers for a flex spot.

The only really tough call is at breaststroke. Nic Fink has been more productive so far this series (17 points to Larson’s 12 in Austin, 9 to Larson’s 7 in Atlanta), but the Mesa, AZ native Breeja Larson does tend to swim well in her home city.

Team Coughlin’s biggest problem is that her crew of versatile stars are fighting her with their event choices. Melanie Margalis is entered in five events spread across the five different disciplines, which means she either has to take the flex spot, or her points are capped at 10 instead of 20. Meanwhile Hali Flickinger is entered in six events across four disciplines, and the past two stops of the tour suggest she’ll scratch at least one event, making her a risky play anywhere.

Here’s how we’re solving it: Margalis takes the flex spot, where she’s probably best-suited anyway. She’s not swimming the 400 IM, which has been her biggest point-earner so far, but the 200 IM/200 free combo should be plenty lucrative in SwimSquad points. Flickinger can take the fly role. She won the 200 fly in Atlanta and was third in Austin, and could potentially be a 100 fly scorer, too, if she swims it.

Ryan Murphy and Molly Hannis are locks for back and breast, respectively. Hannis should be particularly well-suited for the 50, which she won by a longshot in Austin. Madisyn Cox is the only two-event IMer on the roster, and a great choice there. The free spot is wide open between Michael Chadwick, Katy Campbell, Ali Deloof and Cullen Jones. We’ll take Chadwick for his propensity to bust big times in the spring (22.5/49.5 last May, 22.7/49.9 in April of 2016).

Sandeno has had Leah Smith and Conor Dwyer show up on heat sheets twice and ultimately scratch twice so far this year. But Sandeno always seems to have a heads-up (or perhaps USA Swimming is allowing its captains to adjust their lineups due to late scratches, supported by the relatively late announcements of starting lineups), so we’ll trust that she’s up-to-date on both of their statuses. For what it’s worth, we think it’s highly likely that Smith will swim in Mesa (not terribly far from her new training base in Tucson), but we wouldn’t start Dwyer unless we see an Instagram post of him warming up in the Mesa pool.

Michael Andrew has excellent flex possibilities with the stroke 50s involved, but unfortunately, Sandeno won’t be able to use them. It’s impossible to bench freestyler Zane Grothe, and that means first-round pick Leah Smith is either taking the flex role or riding the bench. That’s fine, though, because Andrew can still fit into the fly role, where Sandeno doesn’t really have any blue-chippers to start.

It’s hard to go anyone but Andrew Wilson on breaststroke, even if he can’t match his bruising Atlanta output. Jacob Pebley is one of the consensus top-3 backstrokers and Sandeno’s only two-event backstroker active. The IM spot is weak here, especially with Dwyer uncertain and Andrew not swimming the 200 IM. The only IM options are Smith (200 IM), Dwyer (200 IM), Emily Escobedo (200 IM) and Katie McLaughlin (200 IM, 400 IM), and we’ll go with McLaughlin, who hasn’t swum IM in a long time but has the talent to grit out some points there.

For the second month in a row, the absence of Kathleen Baker, Justin Ress and Regan Smith will leave Team Lezak in the lurch for a backstroker. That’s a big blow for Lezak, who has hoarded all the breaststroke talent but hasn’t been able to capitalize while leaving a valuable starting breaststroker on the bench and while getting goose-eggs from the backstroke slot. If ever there was time for a trade, this would be it.

(Kevin Cordes to Team Coughlin for Ali Deloof. Who says no? Probably Coughlin, who doesn’t need to help an opponent to get a breaststroker who might still sit behind Molly Hannis anyway. Lezak’s strategy of hoarding the breaststrokers looked smart on draft day, but its downfall has been that each of the other three teams already have at least one reliable breaststroker and no incentive to trade for one of Lezak’s).

Nathan Adrian makes this lineup-writing stuff easy. Month-in and month-out, he enters the 50 and 100 free and reliably racks up points. Thanks, Nathan. You make these projections much less work for us.

Josh Prenot is maybe higher-scoring as a breaststroker, but he’s the team’s only two-event IMer in Mesa. That leaves the breaststroke spot between Kevin Cordes and Cody Miller, who are virtually in a toss-up right now, unless Lezak is really feeling optimistic about NCAA record-shatterer Ian Finnerty. Pace Clark is the best of a bunch of iffy fly options. Cordes/Miller could vie for a flex spot, but it’s hard to not start Mallory Comerford, who was third in the 100 free in Atlanta with the top two not competing in Mesa.

Team Krayzelburg has been a marvel of drafting so far, with great options every month. It certainly doesn’t hurt that he has the only swimmer to score a perfect 40 points so far (#1 overall pick Chase Kalisz) along with top scorers at fly (Kelsi Dahlia) and back (Matt Grevers and Olivia Smoliga). What we’re finding out is that the league so far has been turned on scarcity at IM.

So far in the IM slots, Kalisz has scored 40, Madisyn Cox 35 and no other swimmer more than 16. That’s been a huge boost to Krayzelburg and Coughlin, and it’s no coincidence their teams are leading points. At the other end of the spectrum, breaststroke has basically been a monthly crapshoot, with five swimmers scoring between 13 and 26 points. That’s made breaststroke scores relatively even (or at least, less-dependent on draft position) across the board, so those who invested high in breaststrokers haven’t had as much to show for it.

Krayzelburg again has the most complete lineup, with no major holes and standouts at IM and fly. With Leah Smith presumably back in action, this is the month for Team Sandeno to make a run – they’ve got red-hot breaststroker Andrew Wilson, nearly-unstoppable distance man Zane Grothe, and should get consistent points in back and from Smith in their flex spot. The worry is how much they’ll get from fill-in flyer Michael Andrew and converted IMer Katie McLaughlin.

Coughlin might not get the production she has been out of Melanie Margalis with no 400 IM, but her lineup looks pretty safe to score double-digit points all-around, with the exception of freestyler Chadwick. Lezak is going to need massive scores from Nathan Adrian and Mallory Comerford at either end of the lineup, along with Prenot in the IMs and he needs to make the right call on his breaststrokers to cover the backstroke weakness.

In relay terms, Krayzelburg’s ideal relay fits together better than anyone else’s, with great male swimmers to take the first two legs, following what’s proven to be the preferred strategy worldwide for mixed relays. Sandeno’s relay probably has the best shot to give Krayzelburg a run, though it’s impossible, of course, to predict which swimmers will actually swim the relay.

I find these contrived teams silly. Except to be able to create relays, for me they don’t create any “real” competition. Let’s face it most of these team members are Pros or athletes hoping to make the next international team. Silly imho.

It would work if done differently, but the sentiment is in the right spot. USA Swimming should have made this a fantasy-swimming type of thing available to the public

Humor’s on point in this article, well done.

Soooo… we’re not going to give Aaron Piersol’s force-ghost a shoutout, who turns out to be Josh Prenot…