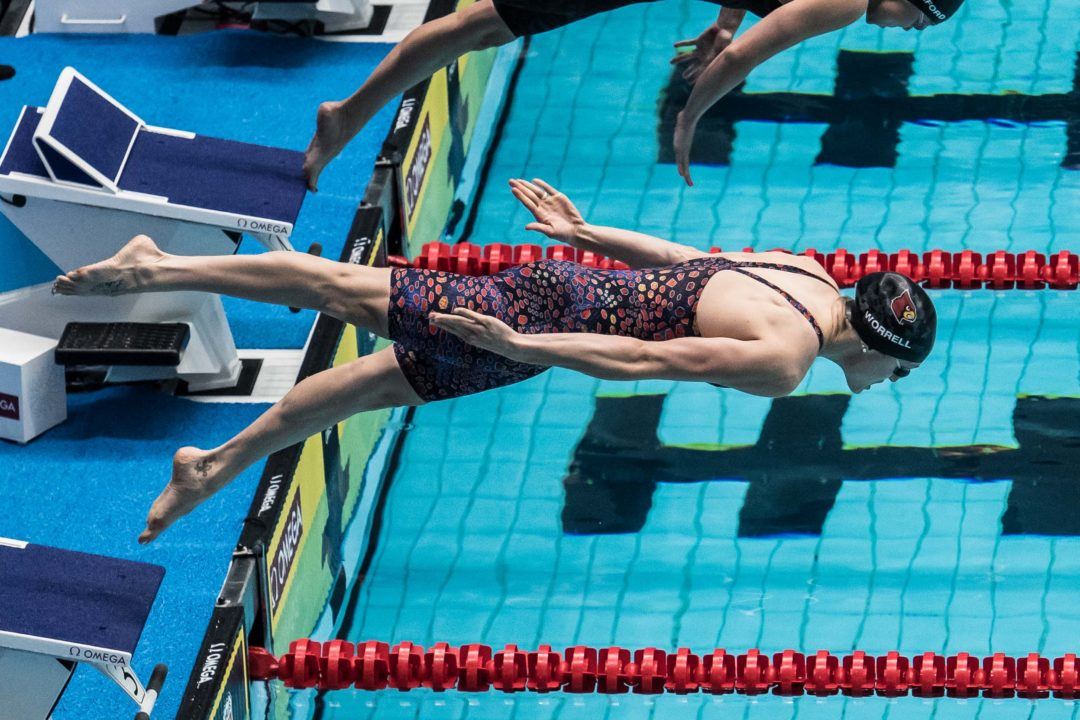 Check out a preview for tonight's finals in Indianapolis. Current photo via Mike Lewis/Ola Vista Photography

We are in for another exciting finals session tonight with four events on the schedule: the 200 free, 200 breast, 200 back and 50 fly. Some of the events tonight feature a clear favorite to win, while others, specifically the women’s 200 back, are wide open. Let’s take a look below.

Both the men’s and women’s 200 freestyle are very similar. This morning’s top qualifiers, Katie Ledecky and Townley Haas, are the clear favorites to win. Both already booked their ticket to Budapest last night, and with that pressure already off their shoulders they should let it rip tonight and add another event to their Worlds schedule.

Just as there is a clear frontrunner in both races, there is also a lot of uncertainty behind Ledecky and Haas. The race for second is very much open in both events, with Clark Smith and Melanie Margalis in that position heading into tonight after some solid morning swims. After winning the 100 free last night, Mallory Comerford is an intriguing one to watch tonight. She’ll likely improve from her 1:58.39 this morning and could take that other individual spot if she’s on similar form to last night. Along with Ledecky and Margalis, Leah Smith was under 1:58 this morning in 1:57.61, and Simone Manuel was right there in 1:58.00.

The men’s race is also wide open for 2nd, especially with one of the favorites for a top-2 finish, Jack Conger, missing the final with a 16th place finish this morning. Last year’s Olympic bronze medalist Conor Dwyer will be out in lane 8, but he hasn’t done the same volume of training this year and will likely battle just for a relay spot, though he’s talented enough to pull something out. Look for him to go out fast and try and hold on. He was the only swimmer who qualified for the A-final who came home over 28 seconds this morning.

Caeleb Dressel, Jay Litherland, Blake Pieroni and Zane Grothe all have a shot at that second spot along with Smith and potentially Dwyer, and will jockey for relay positions as well. Mitch D’Arrigo, who we learned is changing his sporting citizenship to the U.S., has been cleared to swim in the A-final but is still ineligible to qualify for Worlds. However, he can qualify for the World University Games. An interesting situation arises with this, as potentially all but one of the Americans in the A-final could qualify for Worlds in the 4×200 free relay with D’Arrigo ineligible.

Olympic Trials champions Lilly King and Josh Prenot would have to be considered the favorites in the 200 breast, but both are from a lock to win with strong fields in both the men’s and women’s race.

King took the top seed this morning in 2:24.68, and is known to swim better the bigger the stage. Katie Meili is the fastest American this year at 2:23.18, and should challenge the Hoosier for the win. Bethany Galat, who had this morning’s fastest back half in 1:14.19, will look to steal a spot from one of them. She missed a spot on the Olympic team in this event by just 0.13 last year.

Prenot is the definite favorite after back-to-back 2:07s last summer, including an American Record in Omaha and a silver medal in Rio, but there are several men who looked strong this morning and will push him.

The men’s and women’s 200 back couldn’t have a bigger contrast heading into tonight.

In the men’s race Olympic champion Ryan Murphy and his Cal teammate Jacob Pebley are all but locks to take the two available spots, unless either Robert Owen or Sean Lehane can drop a big swim tonight. They actually qualified 1st and 2nd, but Murphy and Pebley were definitely taking it easy. If there’s going to be an upset, Lehane could possibly push Pebley for the runner-up position if Pebley’s a little bit off.

The women’s race, on the other hand, is fairly wide open. Both Kathleen Baker and Regan Smith produced personal best times this morning to qualify 1st and 2nd in 2:08.5 and 2:08.8. Bridgette Alexander, Lisa Bratton and Asia Seidt were all sub-2:10 as well, as this one shapes up to be a very tight battle.

Kelsi Worrell is the clear favorite in the women’s 50 fly after blitzing a 25.78 this morning. She’ll hunt down Dara Torres‘ American Record of 25.50 tonight. Amanda Kendall leads the charge for 2nd after a solid 26.33 in the prelims, but only the winner earns a spot on the World Championship team.

The men’s event is another wide open one. Veteran Cullen Jones flew to a new meet record this morning in 23.26, and it would be a huge breakthrough for him to nab a spot on the team. After winning an individual silver medal at the London Games in 2012, he missed qualifying for the 2013 & 2015 Worlds, as well as last year’s Olympics.

Sprint stud Caeleb Dressel was just a touch slower than Jones this morning in 23.33, and could be the man to beat after his insane 100 fly at NCAAs. The entire field was sub-24 this morning, so it will be a close final, with Michael Andrew (23.51) and Tim Phillips (23.62) third and fourth fastest.

So excited for a Cullen comeback. He was one of my heroes in high school. I got to meet him several times and he was so nice and seemed genuinely interested in my terrible 50 times.

Is the international live stream free?

I peg the 200 breast as the race of night. May be a battle of who has the longest fingernails in the end.

As a result, disqualifications wouldn’t be surprising. Behind Peaty in 100breast, the breast of both distance internationally is so crowded anyone in the final can win.

the 200 free for men will be Epic too – so curious to see what Clark Smith can do with such a field !!!

think it will be haas and then the field.. but extremely curious to see what haas does and where the rest of the field ends up

not entirely sure King performs better the bigger the stage, yes she won gold in the 100 but didn’t final in the 200, so a mixed bag

also not entirely sure Prenot is the definite favorite, all five of those guys should be right there at the end

200 Breast is a very very interesting race.
1. Can Lilly hold off all challengers on back half
2. Age group grudge match in the B final between Reece and Daniel Roy

Roy made the A final…