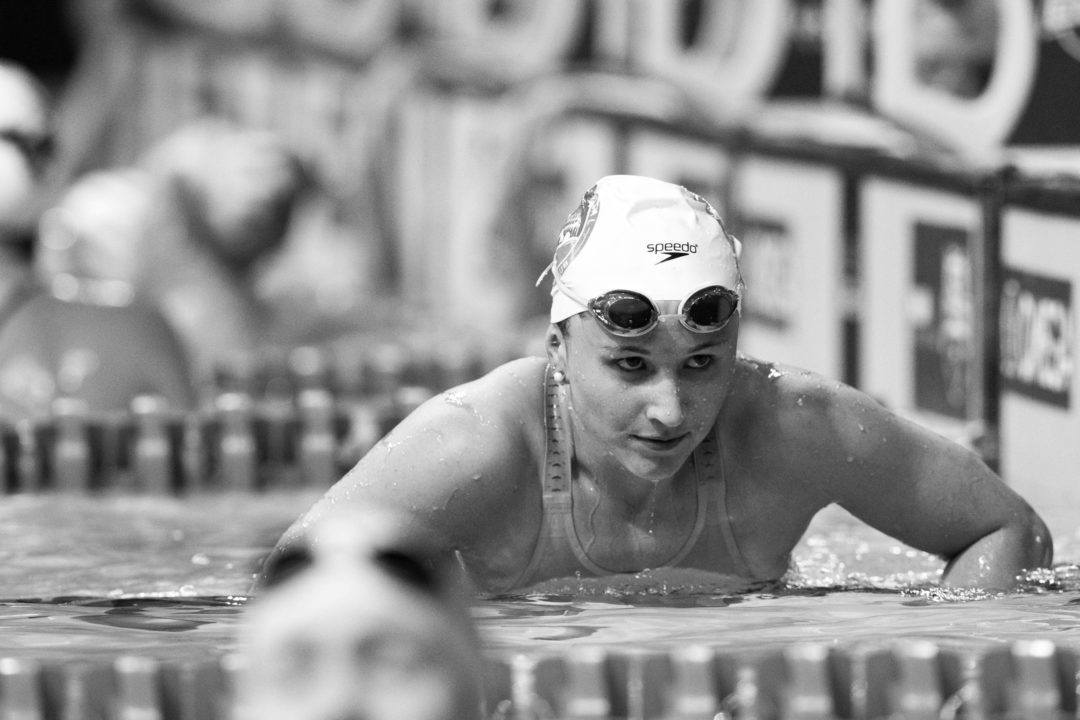 Cassidy Bayer will be one of the key names contesting the women's 200 fly this morning at U.S. World Trials. Archive photo via Mike Lewis/Ola Vista Photography

The opening day of the 2017 U.S. World Championship Trials is here, with just two events slated for this morning’s prelims. The 200 fly and 100 free events will be contested, and then the women’s 800 and men’s 1500 heats will go a bit later in the afternoon.

We have seen some notable scratches for the day, including both Seth Stubblefield and Jack Conger in the men’s 100 free. That event is still absolutely loaded, and will be very interesting to watch this morning as the men battle for a spot in the A-final.

With distance events beginning later, prelims are slated to conclude within an hour and a half of the start. Check out this morning (and this afternoon’s) heat sheets here.

In the 9th and final heat 2016 Olympian Hali Flickinger took control on the back half and pulled away for the top time of the morning in 2:08.43. Sarah Gibson of Texas A&M had a great swim in the heat as well, getting under 2:10 for the 3rd overall seed in 2:09.96.

Dakota Luther popped a 2:08.88 in the first circle-seeded heat for the 2nd best time, nearly two seconds under her seed. Jen Marrkand pulled in at 2:10.42 to qualify 6th overall in the heat.

Cal’s Katie McLaughlin held off Remedy Rule for the win in heat 8, as they were the only two to qualify out of the heat. Cassidy Bayer, who finished 3rd at the Olympic Trials, was 4th in the heat and misses the A-final, 12th overall at 2:11.22.

The men’s 200 fly heats saw some incredibly fast swims, including a slew of best times. In the first circle-seeded heat we saw Pace Clark, Zach Harting and Mick Litherland all lower their personal best to qualify for the final, led by Clark at 1:56.06.

Next up Georgia teammates Chase Kalisz and Gunnar Bentz went head-to-head, both lowering their PBs as well in 1:55.60 and 1:55.72 to take the top two spots heading into tonight.

Miles Smachlo of Michigan went out for it in heat 4 and held on for a big best of 1:57.64, squeaking him past Shields and into the A-final in 8th. You clearly had to be on your A-game to make the A-final this morning, with 13 men going sub-1:58.

Like the men’s 200 fly, the women’s 100 free saw some very fast morning swims and some big names miss the A-final. Mallory Comerford exploded for a new LC National Meet Record and personal best time in 53.26 out of heat 13, taking the top seed heading into tonight. Simone Manuel and Kelsi Worrell, swimming in the 14th of 14 heats, also cracked 54 seconds for seeds #2 and #3.

Lia Neal and Olivia Smoliga qualified out of those heats as well, and Katie Ledecky won the first circle-seeded heat to qualify 6th overall in 54.91 ahead of Veronica Burchill who takes 8th overall.

Caroline Baldwin of NCAC dropped over a second from her seed to win heat 11 in 54.91, moving her into the A-final from a non-circle-seeded heat. Among the notable names missing the A-final was Amanda Weir and Abbey Weitzeil, 14th and 15 overall.

After qualifying for the 200 fly A, both Katie McLaughlin and Sarah Gibson didn’t show for their heat.

Atop of the men’s 100 free rankings sit two surprising suspects. Auburn’s Zach Apple, who finished 35th at the Olympic Trials last year, exploded for the top time of the morning in 48.14. Apple showed off his speed out in 22.9, and closed well in 25.19. All of a sudden he becomes a major threat to earn an individual spot in this event tonight.

Out of the last non-circle-seeded heat Townley Haas dropped a big best time to head into tonight in a tie for 2nd, deadlocked with Caeleb Dressel at 48.56. Behind Apple, Dressel, Blake Pieroni and Ryan Murphy qualified out of heat 9 with sub-49 second swims.

Ryan Held won the first circle-seeded heat in 48.66, the only man in the heat to make it through to the A-final. His Wolfpack teammate Justin Ress narrowly missed, 9th in 49.15.

Top seed Nathan Adrian then took control in the last heat, closing in a quick 25.03 to touch in 48.62 for the #4 seed. Mizzou’s Michael Chadwick, who had a disappointing swim at Olympic Trials last year missing the semi-finals, squeaks into the final at 8th in 49.02.

Along with Ress, notably missing the final but still making it through to the B was Cullen Jones, Matt Grevers, Maxime Rooney, Michael Jensen and Conor Dwyer.

The time required to get in tonight’s A-final (49.02) is actually faster than it took to make the Olympic Trials final out of the semis (49.18). That’s an impressive stat for the field, given those swims in the semis last year were done at night.

Will there be a live stream?

Stream can be found here: https://www.usaswimminglive.com/usa-swimming

Why is this available to people not in the USA, but not to those living here?!

The live stream link above sends me to the Mesa stop of the Pro series. This is unacceptable!!!

I am in the us and still can’t watch it

Don’t go to the livestream link. Just load the USA Swimming front page and the livestream is there if you live in the US. https://www.usaswimming.org/

Though I am in the USA, says 12 minutes to go until the Webcast is on (USA swimming website), but not available in my country?!

Says that for me to ?

If this doesn’t pan out, I’m gonna have to focus 100% on work this morning, and actually interact with people. Ugh, the horror.

Don’t use the livestream link. Just go to the front page of the USA Swimming site and it will load directly there. https://www.usaswimming.org/

800 free
Hmmmm this is hard…… I have to stay in the end though, I think Leah Smith takes this 🙂 🙂

I am serious btw for all except that last 800 free one lol.

its good to have some humor going on – i like it

It says not available in my country, even though I am in the US, do I have to wait until the stream begins?

they are probably , once more , tuning in their broadcast system , which doesn’t always work out properly .

The livestream link above is for international viewers. If you’re in the US, just go to the USA Swimming homepage and it will load automatically: https://www.usaswimming.org/

Has anyone in the US been able to access the live stream?

No, once again either there has been erroneous info about the live stream circulated, or someone has made a technical mistake and the US is blocked.

It’s available directly on the USA Swimming front page if you’re in the US: https://www.usaswimming.org/

Hello Americans, I think that link for the webcast is for the pay-per-view registration for international viewers (like me).

“Beginning at 9 a.m. ET, each day’s prelim session will be streamed live in its entirety at USASwimming.org via Playmaker Media, owned by NBC Sports Group and operated by NBC Sports Digital.”

The link you guys are clicking on is this (where it says register now on the page):
“Swimming fans located outside the United States will have access to a pay-per-view webcast of Phillips 66 Nationals on USASwimming.org for $6.99 per day or $24.99 for the full event Register Now “

we , outside of the Usa wont be abel to see anything , even prelims without paying . UGHHHHHH !!!

Since it’s not working in the US either, I’m guessing VPN won’t really help now… 🙁

its working …..i am watching from Belgium . So it should work for u guys in the Usa

i finally decided to pay for the day – and watch all the prelims live . The stream is not on point at time but getting better .

So let me get this straight, there are options to view this if outside the US, “Swimming fans located outside the United States will have access to blah blah blah”, but if in the USA and not in Indy, we are SOL?

Get your act together, USA swimming. I’d be even willing to pay as a USA person, and I don’t even get that option? 🙁

Link above is international, livestream is on the USA Swimming homepage: https://www.usaswimming.org/