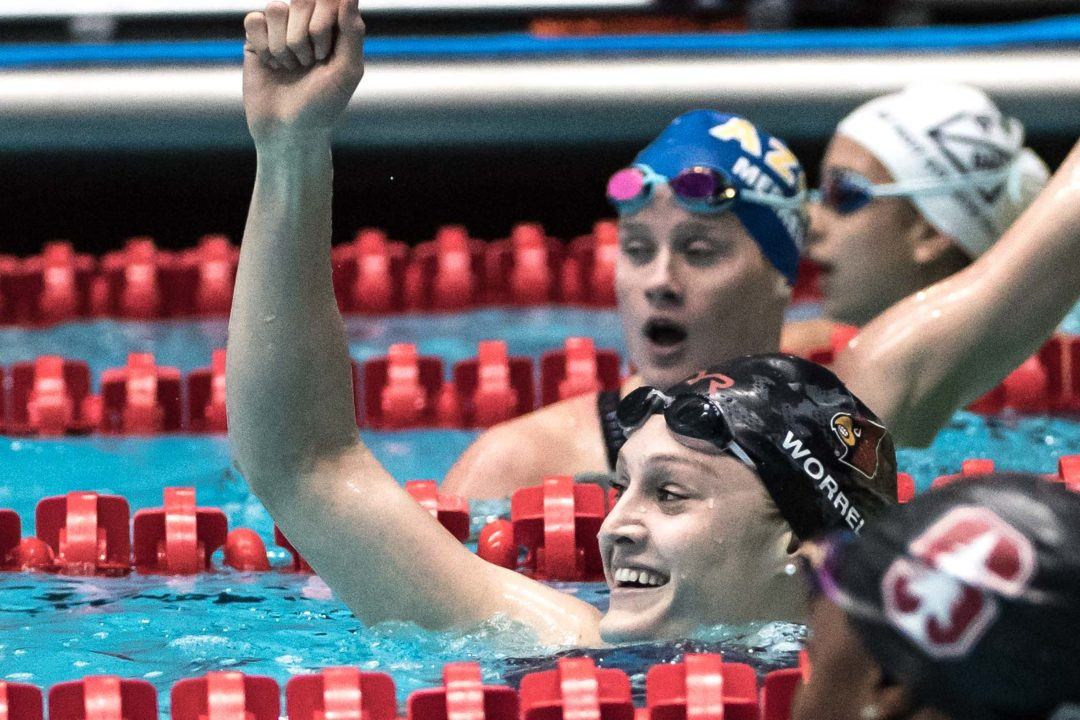 No surprise: Kelsi Worrell was a popular pick in the women's sprint butterfly events. Who were the other popular choices across our Pick 'Em contest? Current photo via Mike Lewis/Ola Vista Photography

We’re one session in, but the break between prelims and finals is the perfect time to do an early look at some highlights from our 2017 U.S. Nationals Pick ‘Em contest.

First, the “shoe-ins”.  Overall, we have nine events with at least 95% of our readers picking the same athlete to win.  Unsurprisingly, Katie Ledecky earned the highest percentage of 1st place picks in the entire meet, with every single contestant picking her to win the women’s 800 freestyle.  More than 99% of voters also picked Ledecky to win the 400 and 200 freestyles (though, interestingly, just 87.5% picked her to win the 1500, which may have been due to how the psych sheets were formatted).

The event perhaps most under fire after this morning’s session?  The women’s 100 freestyle, where, although Simone Manuel is still the favorite tonight, Mallory Comerford is riding a wave of momentum coming off an excellent NCAA’s, as shown by her 53.26 swim this morning to earn herself the top seed.

On the other end of the spectrum, our most divisive events were the following:

Five of these are near-dead heats between two competitors:

Some other notes after the first session:

In event order, here the athletes who received the highest percentage of 1st place picks:

What are the characteristics of a winner “pickers”?

You get the obvious ones (the shoo-ins), and then pick the winners of the “toss-ups” (like the women’s 200 back) to separate yourself from the pack?

It actually winds up being quite similar to the NCAA tournament for basketball. A few people near the top who just made solid picks throughout, and then friends/family/teammates/big fans of a couple of swimmers who had breakout meets and were surprises to make the top 4 in multiple events…except to their friends.

Now that one session is over, where are the Leaderboards posted?