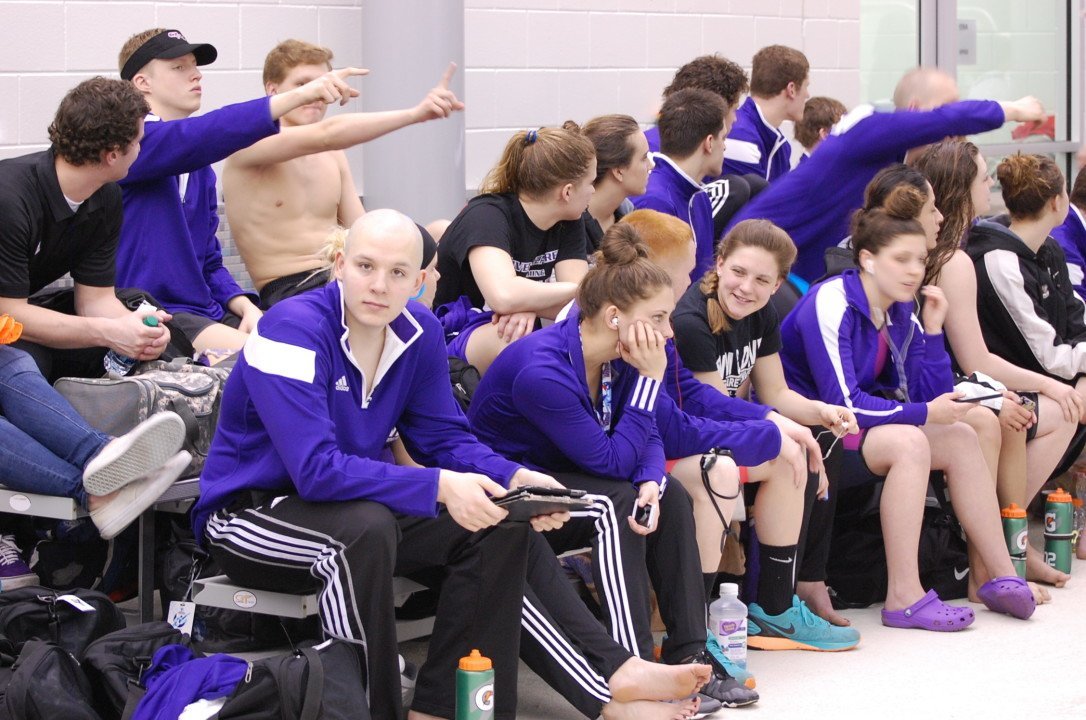 The men of Olivet Nazarene will fight to defend their NAIA National Championship title this week, attempting to hold off SCAD and newcomer Keiser. Archive photo via Anne Lepesant

The 2017 NAIA Men’s Swimming and Diving National Championship will get underway on Wednesday, March 1st at the Columbus Aquatic Center, in Columbus, Georgia. The NAIA, which governs the athletic programs of smaller colleges and universities, will bring together over 200 athletes from 29 schools to compete in their national championship meet.

After last year’s 115-point win over the Savannah College of Art and Design, the NAIA title is Olivet Nazarene’s to defend, but SCAD isn’t likely to go down without a fight. Newcomer Keiser University has had strong performances in its inaugural season, under the leadership of coach Adam Epstein, and those swimmers will also add some variety to the podium and will spice up the two-team competition from last year. The result will be a spirited battle among the three, with major performances from colleges like Lindenwood-Belleville, West Virginia Tech, the Cumberlands, and Wayland Baptist.

Just a handful of teams have divers; Asbury, Biola, ONU, Cumberlands, and Union will have a leg up on the competition at the conclusion of diving. It’s especially important to note that out of three major competitors in the team competition, only Olivet Nazarene has diving. Last year Tyler Timmer scored 32 points in diving for the team, which served a big portion of Olivet Nazarene’s 115-point victory. This season, the sophomore be joined by freshman Matas Skultinas for ONU, but Biola senior Shane Brinson will fight to defend his 1-meter and 3-meter titles.

Last year, 20.67 was fast enough to win the 50 freestyle national championship, but this time around, four swimmers already come in seeded under that mark. SCAD senior Joel Ax comes in with the top qualifying time (20.24), with Wayland Baptist’s 2016 runner-up Josiah Morales close on his heels. Keiser sophomore Andrei Stukov (20.57) and Thomas University’s Perry Lindo (20.66) will also fight for a spot in the top three. The 100 will see a battle among similar players, but Ax comes in seeded a second and a half ahead of the competition with 44.24. Stukov is the second seed with 45.67, and last year’s runner-up Daniil Kuzmin of Olivet Nazarene is the third see with 45.75. Last season, Kuzmin’s silver-winning swim was 45.36.

Defending champion Ax is likely going to have to drop one of the sprint events events (he is also seeded first in the 200 fly), and he is the top entry in the 200 free (1:36.29). He will fight to take down his own national record, a 1:34.90 set last year. The 200 field is packed with new talent, including Ax’s freshman teammate (and fellow Joel) Joel Thatcher (1:39.68), Morningside freshman Connor Bjellum (1:39.13), Keiser freshman Justin Lewis (1:42.00), and Lindenwood-Belleville freshman Matija Luka Rafaj (1:42.07). Bjellum will be attempting to win Morningside its first-ever top-three finish in school history.

Keiser holds the first and third seeds in the 100 back, with junior Danny Hartley holding the top seed as the only swimmer coming into the meet under 50 (49.75). His freshman teammate Nick Oh sits third with 50.95, very close to Olivet Nazarene freshman Magnus Poulsen (50.93). St. Andrews senior Georgi Krastev (50.96) is the first familiar face in the field, after finishing fifth overall last year.

The 200 back will be all Hartley, who comes into the event with a 1:46.02, which would have been fast enough to win the event last year. Olivet Nazarene freshman Magnus Andersen (1:51.11) will fight Asbury freshman Clay Bisher (1:51.21) and last year’s fourth-place finisher Arthur Bertrand of West Virginia Tech (1:52.09) for the second-place finish, along with Lindsey Wilson’s 2016 ‘B’ finalist Clemens Patzold (1:52.10)

Five swimmers come into the 100 fly under 50, led by last season’s fifth-place finisher Josiah Morales out of Wayland Baptist (48.95). Keiser junior  Danny Hartley is also in the mix (49.07), along with Olivet Nazarene Magnus-pair, both out of Denmark Magnus Andersen (49.25) and Magnus Poulsen (49.51). Last season’s third-place finisher Igor Dozortsev of Cumberlands will also fight for the title (49.46).