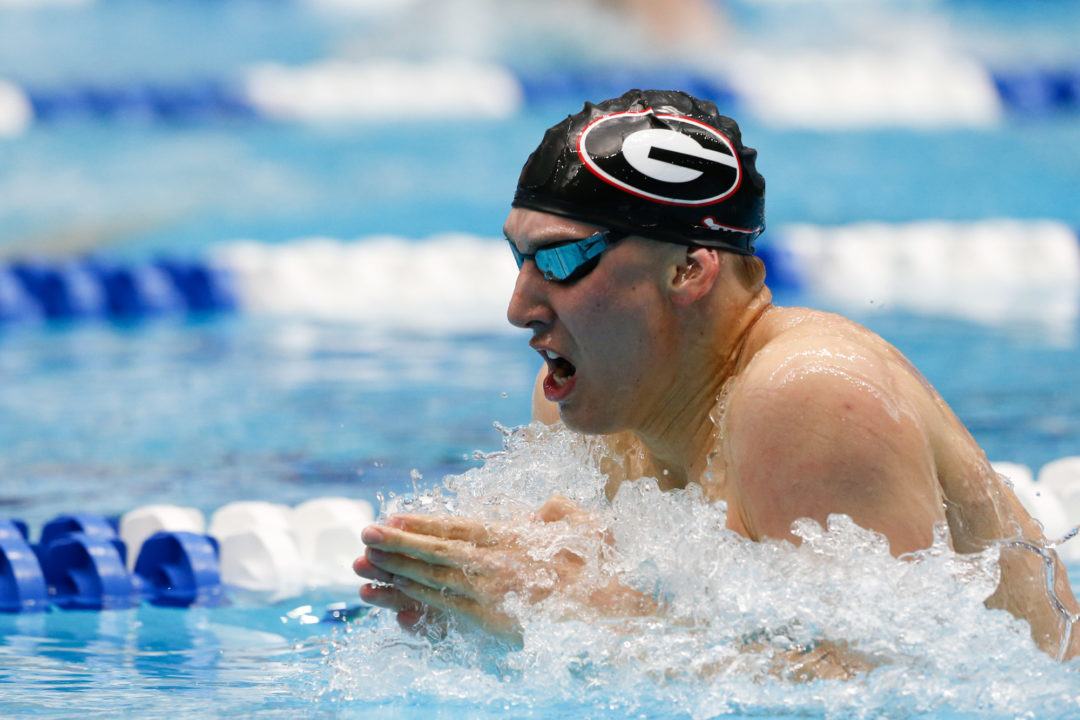 Chase Kalisz ﻿and the Georgia Bulldogs hold three of the top four 400 IM seeds heading into tonight's final, with Kalisz looking to challenge his own American record and reclaim the NCAA throne. Current photo via Tim Binning/TheSwimPictures.com

Chase Kalisz and the Georgia Bulldogs hold three of the top four 400 IM seeds heading into tonight’s final, with Kalisz looking to challenge his own American record and reclaim the NCAA throne.

Kalisz won back-to-back titles in 2013 and 2014, but was upset in 2015 by Will Licon and took a redshirt year in 2016 as Josh Prenot won the title. He’s joined by teammates Jay Litherland and Gunnar Bentz in tonight’s final, along with 200 IM co-champ Mark Szaranek of Florida.

In the 100 fly, Texas stars Joseph Schooling and Jack Conger look to weather the challenge of Olympic sprint powers Caeleb Dressel and Ryan Held. The 100 breast has Will Licon leading a tight field that includes defending champ Fabian Schwingenschlogl of Mizzou. In the 100 back, Ryan Murphy targets his own American record and an NCAA 4-peat in the event, while John Shebat and Connor Oslin target Murphy.

The 200 free could be one of the most entertaining events of the night. Townley Haas is the defending champ and American record-holder. But he’s got to overcome Wednesday’s 1:30-point swimmers Blake Pieroni and Dylan Carter of IU and USC, respectively, plus freshman 1:31s Cameron Craig of Arizona State and Dean Farris of Harvard.

The night will close down with the 200 medley relay, where Cal entered the meet as the favorites, but a red-hot Texas team has taken over the spotlight after prelims.

We’ve also got a shot to see some of the top splits in history in every stroke: Cal’s Murphy has the fastest 50 back ever in 20.20 from last year. Missouri’s Schwingenschlogl was three tenths off the best breast split in history (22.64) this morning. Texas’s Schooling holds the best-ever fly split (19.36) and Dressel this morning set the fastest free split in history at 17.71.

Keep refreshing this page for live, event-by-event recaps in real-time from tonight’s NCAA finals, and follow @SwimSwamLive on Twitter for even more updates.

Georgia’s Chase Kalisz emphatically announced his return to the NCAA, jumping back to the top of the 400 IM with a new American, NCAA and U.S. Open record of 3:33.42. Kalisz was patient, letting Texas’s Jon Roberts push the pace through fly and back. But a massive breaststroke split of 58.61 put Kalisz way out front, and he rode the clean water home with a 51.13 anchor to become the fastest man all-time by 2.4 seconds.

Cal’s Andrew Seliskar played roughly the same game, staying with the pack on fly and back and dropping a 59.92 on breaststroke and a 50.86 on freestyle to nab second place and move all the way up to 4th all-time in the event at 3:36.18. Seliskar passes up legend Michael Phelps for that #4 spot.

Bronze went to Florida’s Mark Szaranek, who tied for the 200 IM win last night. Szaranek was 3:36.31 and sits five hundredths back of Phelps in 6th all-time.

In between was Stanford’s Abrahm DeVine (3:37.73), followed by Roberts, who fell off the pace on breaststroke but still finished 6th in 3:38.66.

Olympic champ and U.S. Open record-holder Joseph Schooling went out fast, but it was the sprint freestyler Caeleb Dressel who ran him down late to pull a big upset and take out the American, NCAA and U.S. Open records. Dressel went 43.58, becoming the second man ever under 44 seconds.

It’s a fitting win for Dressel, the sprinter who was widely criticized by fans for choosing what was seen as a distance school in Florida, to use a massive back half to win a second NCAA title for the week. Dressel closed in an absurd 22.88, using a huge final underwater kickout to pass up schooling and nail the touchout.

Dressel’s 43.58 takes down the 43.84 set by Olympian Tom Shields back in December. Also under that record was Schooling, who pushed the pace early in a gutsy race and held on for second in 43.75, his best by three tenths. That pair sits #1 and #2 all-time.

Cal’s Zheng Quah took fifth in 45.06, but the Bears were dealt a blow when Matt Josa was DQ’d for the second time. Josa has swum two individual races and taken DQs in both. He was called for a non-simultaneous touch on a wall.

Texas continues to lead the team points battle by a wide margin, sitting 99.5 points ahead of Cal. Florida is lurking in third, just 8.5 back of Cal for second, with Josa’s DQ and Dressel’s upset pulling a big points swing.’

NC State is 30 back in fourth and Indiana 10 behind them in fifth.

USC’s Dylan Carter pushed an early pace with half a body length lead over defending champ Townley Haas of Texas, but his big underwaters used up his legs early on. Haas swam a better tactical race, taking over the lead through the middle of the race and pushing in to a 1:30.65 win.

That’s the second-best performance of all-time despite a bit of a rough finish for the Longhorn sophomore. Carter held on to tie for second place with Indiana’s Blake Pieroni. Both men were 1:31.16, tying for the 5th-fastest performance all-time. Carter and Pieroni were both a bit faster on Wednesday night, leading off their team’s relays in 1:30s.

Next came the two freshmen who had the nation’s top times out of the conference rounds. Harvard’s Dean Farris went 1:32.25 for fourth and Arizona State’s Cameron Craig 1:32.46 for fifth, proving they could hold up to the tough NCAA spotlight.

Florida’s junior world record-holder (in long course meters) Maxime Rooney was sixth in 1:32.79. Rooney is also a freshman, with the future of this event at the NCAA level suddenly looking very bright. NC State’s Soeren Dahl (1:32.98) and Wisconsin’s Brett Pinfold (1:33.57) rounded out the championship heat.

Coming out of Dressel’s massive 100 fly win, Jan Switkowski made it two heat wins in a row for Florida, taking the B final in 1:32.51. That won by seven tenths of a second.

In team points, Texas built its lead to more than 100 after the 200, with Florida overtaking Cal for second. The Gators are 11.5 ahead of the Golden Bears, with NC State 30 back of them.

Missouri’s Fabian Schwingenschlogl pushed a huge 23.46 over the first 50 yards to build a big lead, but star 200 breaststroker Will Licon showed his endurance with a 26.80 back-half to pick up the win. Licon was 50.68 to pass up two more swimmers and move to #2 all-time in the event.

Schwingenschlogl held on for second in 50.77, taking the #3 spot all-time for Mizzou.

USC sophomore Carsten Vissering topped the pack behind those lead dogs, going 51.40 for bronze. That was a touchout of .01 over Cal’s Connor Hoppe. A tenth back were Auburn’s Michael Duderstadt (51.55) and Virginia Tech’s Brandon Fiala, who still sits #9 all-time with his 51.30 from prelims. Fiala was 51.66 tonight for sixth.

Duke’s Peter Kropp (51.90) and South Carolina’s Nils Wich-Glasen (51.92) took seventh and eighth in a final where all 8 swimmers broke the 52-second barrier.

Further proving that the breaststroke currently has the best crop of hard-to-pronounce names, George Washington’s Andrea Bolognesi won the B final in 52.07. He was followed by Mauro Castillo Luna of Texas A&M (52.12) and Conner McHugh, who further lowered a legendary Minnesota school record to 52.30.

Cal’s Ryan Murphy completed his first four-peat, winning his fourth-straight NCAA title in the event with a 43.99. Murphy hasn’t been quite as on fire as he was last year, but this time still stacks up as the third-fastest swim in history, and Murphy himself owns all three swims ever under 44 seconds.

Second went to Texas sophomore John Shebat, who has morphed this week into the NCAA’s next premier backstroker in the post-Murphy era. Shebat was 44.35, cutting almost three more tenths off his prelims swim and moving to #3 all-time. He passes up Olympic champ Matt Grevers tonight.

Alabama’s Connor Oslin took third in 44.56 – that finishes just outside of the top 10 swims all-time, and Oslin remains 5th in history. The Crimson Tide also took fourth in 44.91 with junior Luke Kaliszak.

Georgia’s Taylor Dale came up with one of the most impressive B final swims of the night. Dale swam the 100 back in the morning, plus Georgia’s 200 medley relay, then lost  swim-off for 8th in the 100 back, making tonight’s B final his 4th swim of the day. But Dale came up with his best swim by far, blasting a 44.64 to crush the field by a body length and crack the top 10 all-time. Dale now sits 7th all-time, passing up – ironically enough – Penn State’s Ryan, who beat him in the swim-off just about four hours ago.

In the team points battle, Cal took advantage of Florida’s big backstroke and breaststroke weakness to rocket back to a 24.5-point lead for second. NC State is 51 behind Cal and Indiana 66.5 back. But IU has two divers in the A final, and should score in the ballpark of 30 points.

Purdue’s Steele Johnson won his second-straight diving event this week, outscoring the field by 25 points and breaking the NCAA meet record with 502.20 points.

Miami’s Briadam Herrera took second with 477.30 and LSU freshman Juan Hernandez made a stellar debut with a 464.35-point, third-place finish.

It was a wild 200 medley relay. Defending champs Alabama were without their key piece from last year, anchor leg Kristian Gkolomeev, but apparently no one told the Crimson Tide they shouldn’t be contenders anymore. They went out fast on Connor Oslin‘s field-best 20.39 backstroke split and hung tough the entire way.

But Texas was too tough to hold off, with their killer middle splits. Will Licon had the field’s best breaststroke split at 22.91 and Joseph Schooling the best fly split at 19.45 to give the Longhorns the lead. Brett Ringgold‘s 18.34 anchor capped a new U.S. Open and NCAA record of 1:21.54. John Shebat was the leadoff man there, going 20.84.

Cal was 1:22.28, getting a 20.45 backstroke leg from Ryan Murphy. Behind them, Mizzou was 1:22.48. Breaststroker Fabian Schwingenschlogl was the only other breaststroker under 23, going 22.93 for the Tigers.

Texas holds a nearly-insurmountable lead of 138.5 points heading into tomorrow. But the drama is for second, where Cal leads Florida by almost 30. NC State remains fourth, though Indiana’s tough divers helped close that gap to just 6.5 points.

From there, things are tight between Stanford, USC and Georgia for sixth. Stanford has great milers, but Georgia is tough in the 200s of each stroke. USC probably has the best sprinters of the bunch, which helps in the 100 free and 400 free relay, so that race should come down to the wire tomorrow. Mizzou isn’t totally out of that hunt, coming off of two high medley relay finishes.

It’s Louisville, Auburn and Alabama currently fighting for the last spot in the top 10.

How the f do you get the first comment every damn time?

Fun fact: back in 2013 Shane Ryan was runner up in the 100 back swimming out of lane 8.
Could it happen again?

Gunnar Bentz had a 48.7 free split