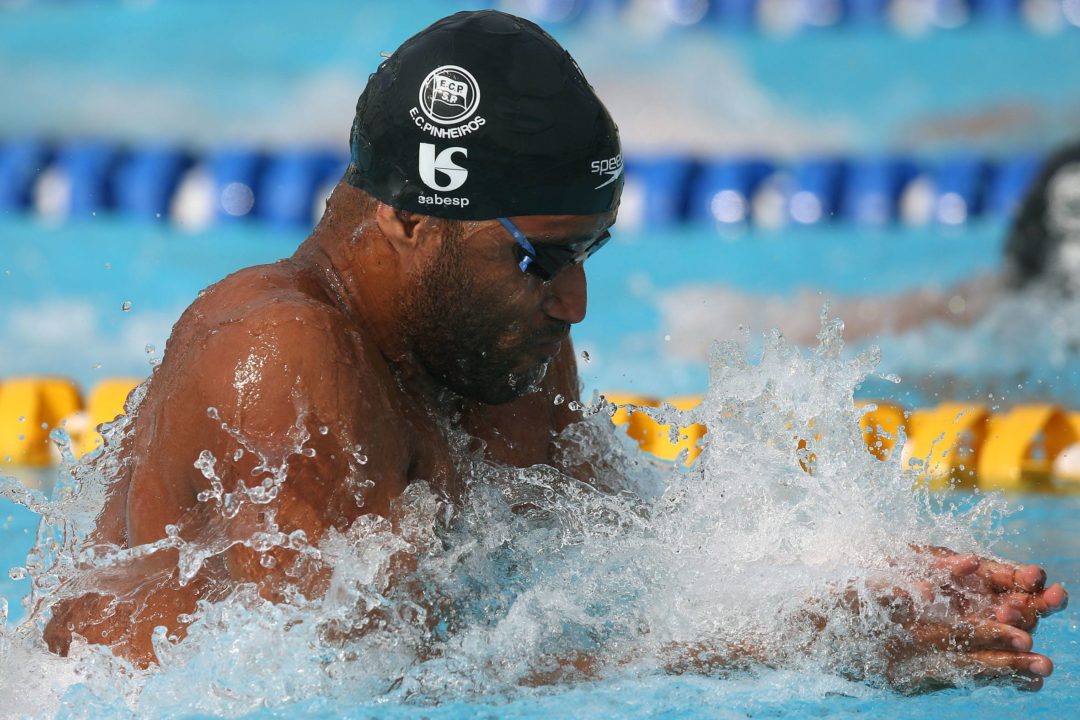 Joao Gomes Jr will lead a heated battle for the two Olympic spots on day 1 of the 2016 Maria Lenk Trophy. Archive photo via Satiro Sodre/SS Press

Brandonn Pierry Cruz De Almeida dominated the first final of the Maria Lenk touching the pads in an impressive time of 4:14.63, dropping more than 10 seconds from this mornings swim, and being way under the FINA A cut qualifying time. Almeida was just off his time from the Brazil Open but was the only swimmer of this meet to make an A cut standard in this event, finishing the race more than 5 seconds ahead of the field. 2nd and 3rd place finishers; Murata of Japan and Wang of China both dropped time from their morning swims, but feel short of the FINA A cut.

The top 3 finishers of the women’s 100 fly all swam under the FINA A cut, with winner Daiene Dias and country mate Daynara Ferreira both making the Brazilian Olympic Team. Dias, who had a faster time in the prelims, still went on to repeat a qualifying time and win the event. Ferreira, who was seeded 4th after the prelims, dropped more than half a second off her morning swim. Etiene Medeiros, who was seeded second for tonight’s final after swimming a FINA A cut in the prelims, scratched the event, for tonight to focus on her main event tomorrow, the 100 backstroke. Katarina Listopadova of Slovakia also made an impact in the pool tonight, taking 0.28 seconds off of her morning swim, to get her just under the FINA A qualifying time in this event.

More women break the FINA A cut barrier and post impressive times in the 400 IM A final. Joanna Maranhao posted the top time (4:38.66), taking more than 7 seconds off of her prelims swim, which was well under the olympic A cut time (4:43.46). Barbora Zavadova of Czech Republic also shed a few seconds off of her prelims swim to give her an A cut (4:42.17), and Virginia Bardach of Argentina, also touched the pads almost 7 seconds faster than she did this morning, clearing the FINA A cut qualifying time with a third place finish of 4:43.17.

The strength of breaststroke amongst Brazilians was definitely portrayed in the men’s 100 breast A final, with the top 5 finishers all finishing under the FINA A cut. It was a race to the finish but in the end it was Joao Gomes Jr (59.10) and Felipe Franca Silva (59.36) who improved on their times from the Brazil Open and will take the top 2 spots for Brazil to swim the event at the Olympic Games this summer.

Almeida is still a junior for Fina?
Is he still eligible for world junior records this year?
I think Sean Grieshop has a good chance to break his time of 4.14.07 at US trials.

Day 1 and already a doper (Gomes Jr) in the team. How many will join him?

So disheartening to see.

Lani, this is the “real live time results”, could you please add this to the links?