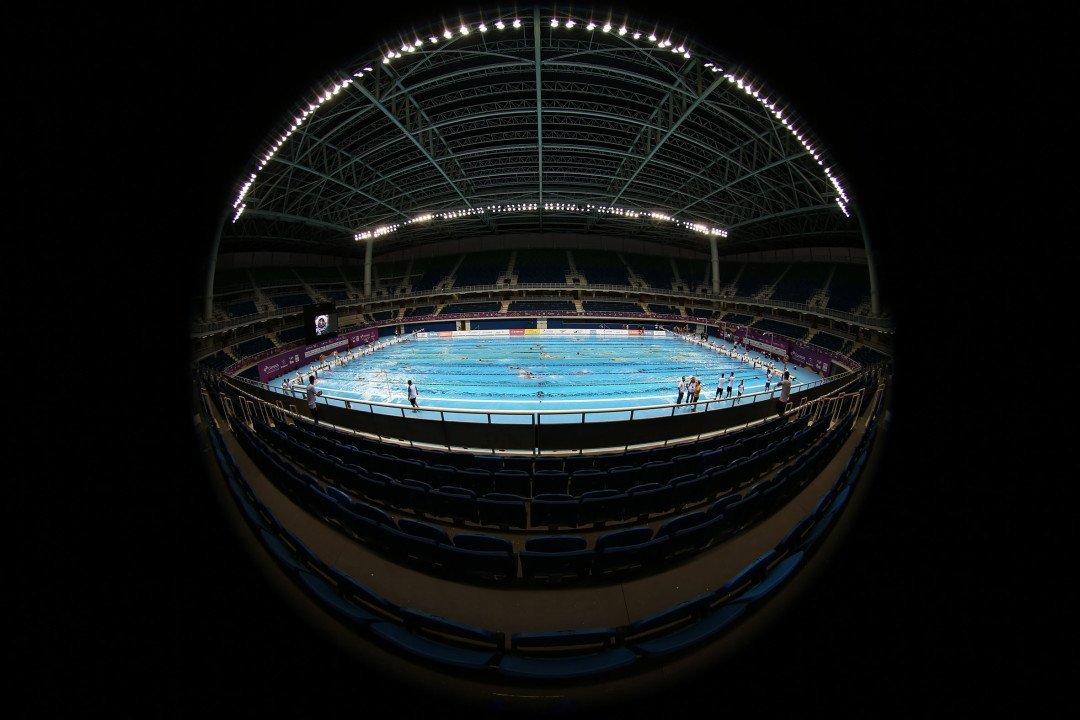 The Olympic Park Aquatic Stadium test event, the Maria Lenk Trophy, was largely successful, although it shed light on a few fixable problems with the facility. Current photo via Satiro Sodre

The Olympic Park Aquatic Stadium in Rio de Janeiro, Brazil played host to its first-ever meet this weekend, the Maria Lenk Trophy, the second of two Olympic qualifiers for the Brazilian team.

The meet started off without any major hitches, and athletes, spectators, journalists, and coaches alike praised the facility for its aesthetic beauty (see our photo vault of the finished facility). However, on the last day, a short blackout during the medal ceremonies raised some red flags to the Brazilian Swimming Federation (CBDA) and the Rio 2016 Organizing Committee.

One of the chief complaints of both swimmers and spectators throughout the meet was the heat and air quality inside the pool, due to poor ventilation.

“The facilities were very good,” Etiene Medeiros, showrunner of the Brazilian women’s team, told Globoesport.com (roughly translated). “This is a very hot time of the year here in Rio, so we’re feeling it, even inside… I hope in August it’s not so hot outside, which will help. There’s a lot of work to be done, and there’s no way we’re saying ‘it’s perfect.’ But, during the Olympics it will be much better.”

Executive superintendent of the CBDA Ricardo de Moura feels that the test event (which was closed to the public) was an overall success.

“We were able to have some big successes,” de Moura told Globoesport. “First, we didn’t put the entire public in the facility because it would have been a risk. Second, the positive energy of swimming in the Olympic Stadium helped contribute to some of our swimmers’ results… Some points we’ll need to improve are ventilation and air flow; bathrooms, because one girl got locked in a stall; operational staff; and pool heating.”

The facility currently has no cooling system and uses only natural ventilation. However, athletes praised the indoor pool itself highly. Most of their complaints came from the facility and surrounding area, including the outdoor warmup pool.

“I thought the stands could have been a little better designed because there are these columns in front of the seats,” Leonardo de Deus, who qualified for the Olympic 200 back and 200 fly at the meet, said to Globoesport. “I found the structure inside, around the complex, very small. In the Olympics, the whole world will be there, so they could extend it a little more. The outdoor pool also has a ton of mosquitos. But the competition pool is wonderful, world class, and there’s no reason for athletes not to put up their best times in the pool.”

The outdoor pool will be completely enclosed by a tent and air conditioned come August.

Both FINA and the CBDA have talked with the City of Rio about installing fans in the indoor pool area, but no concrete decision has ben made.

Complaints aside, the Rio 2016 committee approved all of the points that were being tested at the event, including the timing system, volunteers, on-deck teams, and equipment.

Its an open air facility as I understand it. We held usa national outdoors in San Antonio last summer? So I don’t think its really a problem unless they have a cold snap and the finals are at 10 at night it could actually be a little chilly.

Let’s look at from a swimmers perspective if you have an athlete that has vcd ( vocal cord dysfunction) and they can’t breath properly who are they going to sue the Olympic committee and the people who built the aquatic center. By law especially in any type of swimming the pool must have heating and cooling. And a functional ventilation system believe me I know. I’m not saying you can’t for the swimming but you need a ventlation system and a couple of fans is not going to do it. In today’s world the the health inspector would shut you down for not having a ventlation system. So Eather put one up or figure somthing out.

of course ths mozzies like water so they will be there even for bucket of water especially at dusk.
The only reason there was a respite in moz & general insect attack was deforestaion & ddt .Now they are back along with re greening . They don’t like fire so maybe a ring of fire around the pool. That should deter insects & WADA .

“Mozzies”! That’s an awesome nickname; I’m going to start using that one. Australians always have the best names for everything!

You are by far my most favorite commenter. One comment from you entertains and inspires me more than the rest combined.

Seriously, Swimswam should make you honorary commenter or contributor or something that comes with nice perks, of course.

Oh no! The outdoor pool is surrounded by mosquitos! The article says it will be enclosed for the Olympics, but we need to keep the competitors away from those mosquitos at all costs!