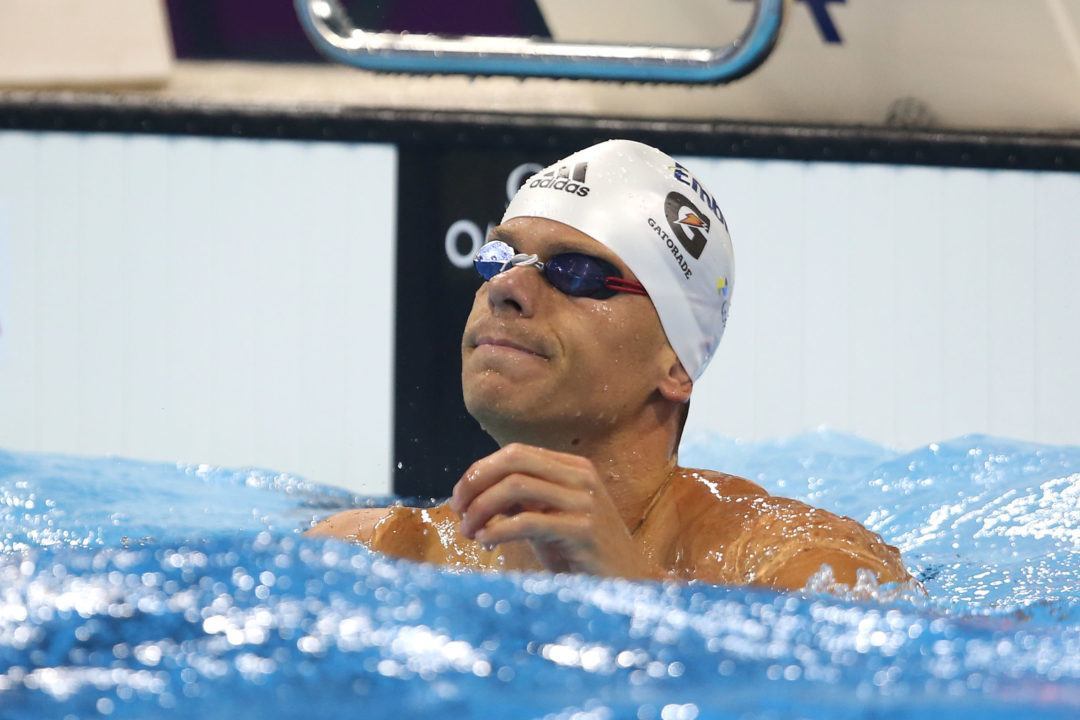 Cesar Cielo said to the crowd, "I want to apologize to all of you. I gave it my all." Archive photo via Foto: Satiro Sodré/ SSPress

Despite clocking his 52nd sub-22 50m freestyle yesterday at the Maria Lenk Trophy, Brazilian sprinting legend Cesar Cielo came up short in terms of making his nation’s Olympic roster. Having scratched out of the men’s 100m freestyle event earlier in the meet, Cielo put all his attention on the men’s splash ‘n dash, which looked promising after his 21.99 prelim outing.

In the final, however, 29-year-old Cielo wound up in 3rd place overall, finishing behind winner Bruno Fratus and Italo Duarte. As such, Cielo will not be competing at this year’s Olympic Games.

This disappointment carries an extra sting for Cielo, as his home country of Brazil is the host nation of the 2016 edition and there was early talk of Cielo possibly being on the short list for Brazil’s flag bearer during the Opening Ceremony. The realization of this came to fruition during Cielo’s emotional interview, translated below:

“Unfortunately, it didn’t happen. Brazil will go with the two best ones, good luck to them, I will cheer the best I can, that is it. I gave my all, I went with my family to the USA. But all the things like the blackout today… Everything affects, but is not an excuse…the two (Fratus and Ítalo) swam very well,the Brazil is good. I, on my part, I want to apologize from all of you, I was beneath the expectations of what I can do. I had a hard year last year, didn’t swim well today. It’s very hard to talk the way I talking today. Life goes on,the Brazil goes well, guys thanks!(…)They(his family) are the reason of all my conquests, Olympic gold, World Record. Sorry, dad, sorry, mother. This time, it didn’t work out.”

Cielo also said to the crowd, “I want to apologize to all of you. I gave it my all.”

Cielo will be greatly missed at this year’s Games.
The emotion he brought to the water in every single one of his races has, without a doubt inspired swimmers from all around the world- including myself. Doping allegations aside, he is a modest swimmer as reflected in his post race interview and I will support him.
It is sad to see him go like this but his legacy will live on as one of the world’s greatest sprinters.
Hopefully he finds the drive to swim at Worlds and redeem himself for his result this time around.

Lol, this dude LOVES to cry over everything…

That’s the passion of a competitor… with 2 world records to his name. Maybe you should have cried a little more during your career Brad.

Do you, at least, have something to cry for?

Not so good without the suit.

The suit era were for everyone, don’t be hypocrite.

i think he got 2 world championships under his belt after the suit era.