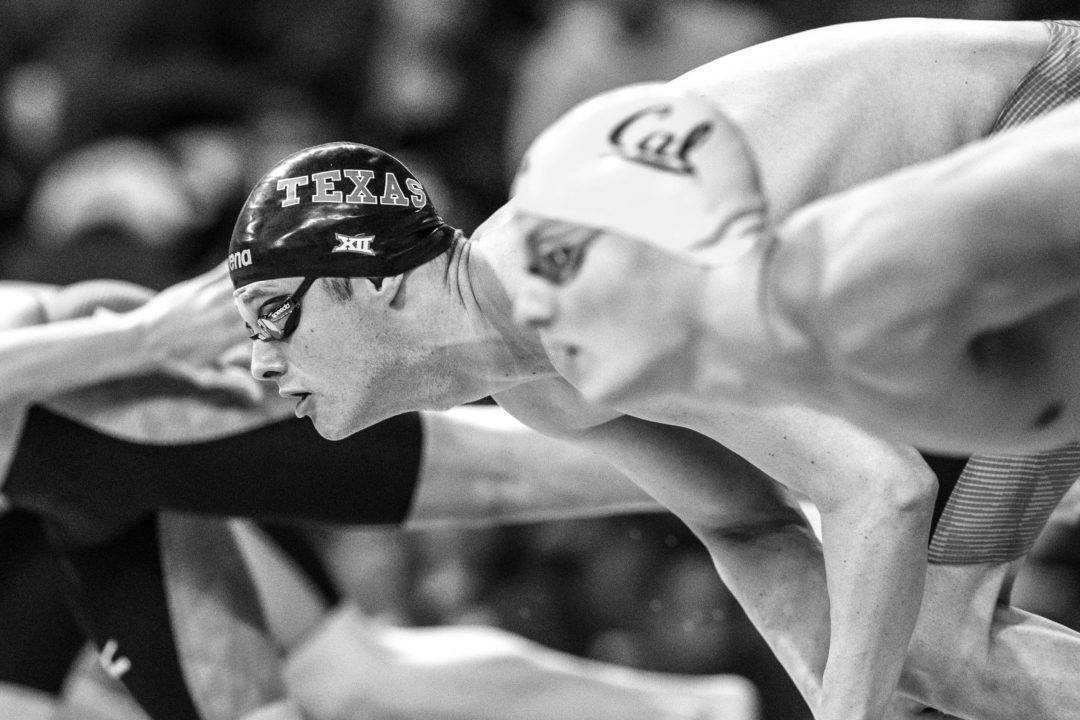 Jack Conger (left) and the Texas Longhorns will be challenged by the Cal Bears this season, but for now, they're our #1 team Current photo via Mike Lewis/Ola Vista Photography

Following up our opening 2016-17 Women’s NCAA Power Rankings from last week, here are the opening 2016-17 men’s season.  Familiar faces make up the top five in the same order they finished at last year’s NCAA’s, but from there on down, there’s plenty of movement.

Brandon Fiala was one of the breakout swimmers of the 2015-16 NCAA season, and he’ll have help this year.  Robert Owen will continue to hold down the fort in the backstrokes and IMs, and sophomore Norbert Szabo is proving to be an important piece.

Not the deepest team by a long shot, but Wisconsin has NCAA scoring talent, led by senior Matt Hutchins.  For now, though, it’ll be tough sledding for a dual meet season where the Badgers, already 0-3, have upcoming duals against Georgia and USC.

Starting the season 0-2 against Georgia and Tennessee, but there’s reason for optimism.  Transfer Jorden Merrilees has been a big addition for the Tar Heels.

Contrasting to their archrival Wisconsin, Minnesota brings in a deep dual squad, but the jury is still out on how it will translate to an NCAA format.  Bowen Becker (19.92 in the 50 against Wisconsin) has had a great start to the year.

The Buckeyes haven’t competed officially yet, and it’ll be smooth sailing all the way until their fall invitational; their next four competitions are against Kenyon, Denison, Cleveland State, and Miami (Ohio).

A young team that took the Pac 12 by surprise last season is back and should be better this year.  Only two meets so far (with the most recent one at altitude against Utah), but the season kicks into gear next weekend when the Wildcats head to Los Angeles to take on USC.

The Trojans took a step back last season.  That seemed inevitable when you have as many graduations and redshirts as they did.  Dylan Carter is back on the roster, but how USC finishes at NCAA’s will depend on if last year’s loaded freshman class (Carsten Vissering, Alex Valente, Patrick Mulcare, among others) can make a similar leap to what we saw from the Carter/Condorelli/Domagala contingent during their sophomore year.

Some big gaps to bridge to get back to their 7th place finish from last year, but Kyle Decoursey (20.0/44.2 last weekend) looks primed to take over as the #1 Volunteer sprinter.  We’ll know more after they take on Louisville and Indiana this weekend.

The Cardinal have had just one day of competition, so we don’t know much yet about how they plan to improve upon their worst NCAA finish since 1979.  Sam Perry should hold down the sprints, and True Sweetser (already 4:21.8/15:03.0 in the 500/1650) is a double-distance threat.

After a promising 2016 conference meet, the Tigers had a puzzling NCAA’s.  Luckily, almost the entire NCAA team is back from last season, including the increasingly-versatile Joe Patching.

We didn’t see much in terms of depth in their loss to Alabama, but this is an underrated squad that should crack the top ten at NCAA’s again.  Michael Chadwick (19.8/43.3) is off to a fine start, once again.

Like it or not, Grigory Tarasevich is eligible and tearing it up; his 46.00 in the 100 backstroke against Michigan is already a full second clear of the next fastest swimmer this season.

Michigan really underperformed at NCAA’s, but this freshman class will address a lot of the problems with last year’s squad.  For starters, Jacob Montague looks like the real deal as a breaststroke option, clocking in at 54.7 in the 100 breaststroke against Louisville.

Sadly for the Tide, Kristian Gkolomeev is out of eligibility, but freshman Zane Waddell (19.9/44.4) and sophomore Laurent Bams (44.0/1:36.4) have filled in nicely to start off the season.

The Hoosiers looked great against Texas and Florida, but we won’t place them above either of those squads at this point.  The sprint group continues to flourish under Dennis Dale, with three sprinters at 44.0 or better this season.  Adding distance stud Marwan El Kamash helps, too.

Downed UNC in their opener.  With Chase Kalisz back, and freshman star Javier Acevedo already contributing, the Bulldogs have a real shot at grabbing a team trophy at NCAA’s.

Caeleb Dressel is the straw that stirs the drink, but Jan Switkowski and Mark Szaranek are who make the Gators dangerous from a team perspective.  The kicker will be if freshman Chandler Bray can develop enough to take over the breaststroke leg from Dressel on the medley relays.

No Matt Josa yet, but the rest of #1 freshmen class in the country is already showing up big.  Michael Jensen dropped a 43.22 in the 100 free earlier this month, good for the nation’s top time.

Defeated Florida, but fell to Indiana in a tri-meet to open the season.  No matter; the Longhorns were without Joe Schooling, Ryan Harty, and Will Licon.  It will be interesting to see if the squad is fully intact for their showdown against NC State next weekend.

Texas not only has great swimmers, but also has a boatload of talented divers that will bring points come NCAA- 2 seniors, Mark Anderson (OT finalist) and Sean O’Brien and three freshman, Grayson Campbell (OT finalist), Jacob Cornish and Reed Merritt.

How come isnt NC State raked number first? They’re are obvisioulsy the fastest top racing duol meet team in the entire country right now in the NCAA. I would of picking them to be at least top too ranked teams if not the top team in the natioan to beet now. Although its still earlee days, they have allreedy made quiet the STATEment

Honestly a little surprised Cal isn’t #1. Not a Cal alum, just got a feeling that in Murphy”s senior year with a DEEP freshman class they are gonna pull it off. I don’t have a good feeling about Texas after Indiana”s beat down. If they show up big and woop up on NC State, hopefully, then their #1 is justified 100%.

How is Texas number 1? Ridiculous, clearly it’s time for someone else to be ranked number 1-

It won’t be time for someone else to be ranked #1 until Texas isn’t the NCAA favorite anymore…..

I believe Harty will be out a while. I was told he ha a broken wrist and injured elbow.

Didn’t a Longhorn a few years ago miss some of the fall with similar injuries from a bar fight or such?

Hardy might redshirt. Licon is focusing on his Mormon mission this year.

You were told right. Dude fell out of a tree.

NC STATE is overrated this year?

5
-19
Reply
JP Input is too short
Reply to  swimfan

I don’t really think so. Who’s definitely better than them that’s ranked below them?

I Would disagree. They have always been a sprint powerhouse, and still are. BIllas is the only NCAA individual scoring loss, and they have freshmen recruits that can be built to fill those spots, or are fast already (McGlaughlin, Rice). In addition the distance group has so far showed a lot of power, which is something NC State isn’t traditionally good at. We will see if they show up against Texas, but I think this is a program/squad on the rise, not an over rated one.

Is Matt Josa ineligible until the spring semester? or have they just not swam him yet?