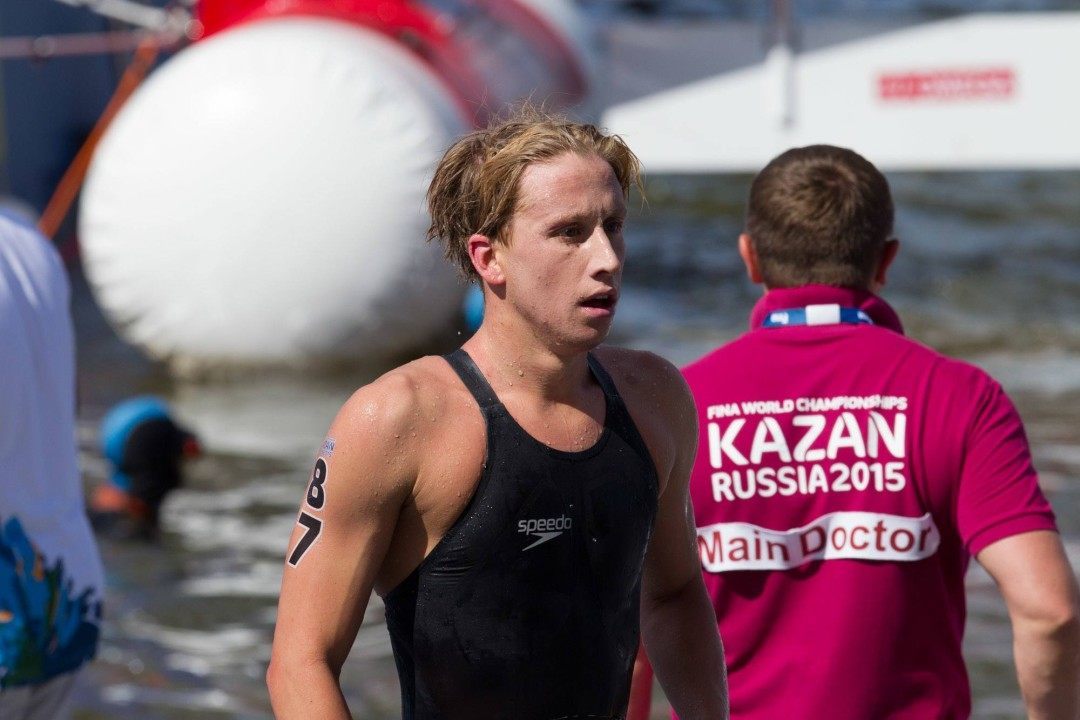 After winning the World Championship title in the 10km Open Water event in Kazan, Jordan Wilimovsky will look for a US National title tonight in the 1500 Current photo via Tim Binning/TheSwimPictures.com

Michael Taylor will have lane 4 in the men’s 200 back final tonight after posting the top time of the morning in 1:58.41. He was followed closely by Carter Griffin, Jack Conger, Travis Mahoney, Jacob Pebley and Robert Owen who all swam sub-1:59 this morning, setting up a great race tonight. Pebley is coming off a gold medal performance in this event at the World University Games, Griffin is coming off a silver medal in this event at the Pan Ams, and Conger will look for his 4th medal of the championships after already earning three 2nd place finishes (100 fly, 200 fly, 100 free). Joining them in the A final will be 16 year-old Austin Katz and Austin Surhoff who was 4th in the 200 IM last night. Surhoff’s time of 1:59.37 was the cut off for the A final. The B final will feature Hennessey Stuart, Craig McNally and top seed Christopher Reid (1:59.52). In the C final we will see John Shebat, Joey Reilman and top seed Bryce Mefford (2:01.00).

Laura Sogar posted the top time in the women’s 200 breast this morning with a time of 2:25.16. Sogar qualified 1st by over a second, with 2nd overall Emma Schoettmer coming in at 2:26.33. Both Sogar (2:26.75) and Schoettmer (2:28.23) were faster than their entry times coming in. 3rd went to Emily Escobedo, 4th to Molly Hannis and 5th was Andrea Cottrell. Top seed coming in Annie Lazor snuck in qualifying 7th overall in 2:28.79. Also swimming in the A final will be Esther Gonzalez Medina and 8th seed Annie Zhu (2:28.86). The B final will feature Madisyn Cox, Lilly King, Georgia Bohl and top seeded Justine Bowker (2:29.08). The C final will feature 14 year-old Ashley McCauley, Lindsey Horejsi and top seed Vanessa Pearl (2:31.01).

Andrew Wilson continued his strong showing here in San Antonio, posting the top time in the 200 breast prelims of 2:09.84. After winning the 100 breast and breaking a minute for the first time, Wilson was well under his entry time of 2:15.76. Wilson will look to sweep the breastroke events at these championships tonight. It won’t be easy though, as NCAA champion Will Licon was fast this morning as well, qualifying 2nd overall in 2:10.10. Licon’s back 100 was almost a full second faster than Wilson’s, but Wilson had the fastest front half by far taking it out in 1:02.11. Look for Wilson to be out fast again tonight with Licon trying to track him down on the 3rd and 4th lap. Joining them in the A final will be BJ Johnson, Craig Benson, Michael Jamieson, Michael Phelps, Samuel Tierney and Chuck Katis (2:13.11). Phelps posted a massive personal best this morning of 2:12.68. The B final will feature Reece Whitley, Andrew Seliskar, Brad Craig and top seed Sean Mahoney (2:13.21). In the C final we will see Charles Swanson, Jeremy Babinet and top seed Matthew Anderson (2:15.12). Despite a rough prelim swim of 2:19.68, Michael Andrew did qualify for the 18 and under C final. However, he has scratched the event tonight. Among those missing the finals was Gunnar Bentz (2:17.84) and Mike Alexandrov (2:19.06).

Swimming in heat 1 of 3 will be Carmel Swim Club, Wisconsin Aquatics and the University of Louisville, among others. Heat 2, the top seeded heat, will feature Tennessee Aquatics, Club Wolverine, Aggie Swim Club, Auburn University, University of Kentucky, University of Missouri, Team Bruin and top seed Australia (4:01.75).

My money will be on Wilimovsky tonight. He has had an excellent summer and I think this swim will make some heads turn.

The women’s 800 paragraph doesn’t make sense. Was Henry second or third seed, did she swim or is she going to swim?

Watch for Ransford in the 1500. He beat Willamovsky at NCAAs (2nd and 3rd respectively in the 1650) and his time indicates he can go a lot faster than

Watch for Ransford in the 1500. He beat Willamovsky at NCAAs (2nd and 3rd respectively in the 1650) and his time indicates he can go a lot faster than **what his seed time is. Seems to swim big when it matters most