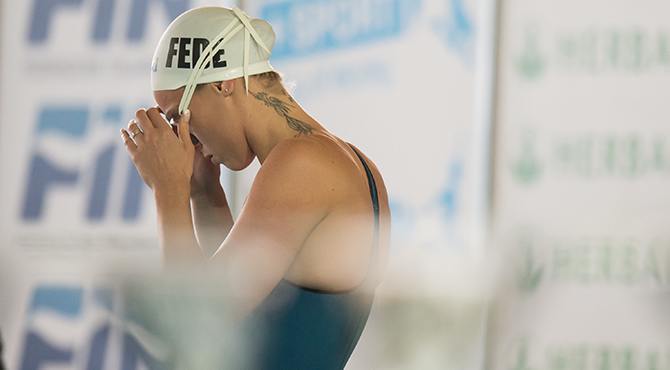 Federica Pellegrini led off CC Aniene's 800 free relay with 1:56.88, the seventh-fastest in the world so far this year. Current photo via www.federnuoto.it

The Italian Spring National Championships and World Championships Trials opened in Riccione on Tuesday, with 621 athletes from 139 teams. The meet is doubling as a selection meet for the Italian team who will compete at 2015 FINA World Championships in Kazan, Russia. The Italian qualifying standards for Kazan are more difficult than what we saw two weeks ago in France. We have outlined the standards in our Day One recap here.

The level of swimming was much better on Day Three, with excellent racing, Kazan qualifications, and a national junior record.

Defending champion and Italian record-holder, Piero Codia (Army / CC Aniene), won his signature event in a faster time than a year ago, but .32 short of the Kazan qualifying standard. Codia touched in 23.72, followed by Marco Belotti (Forest / CC Aniene) in 23.86 and Luca Dotto (Forest / Larus) 23.87.

The women’s 400 IM featured some truly excellent racing, as defending champion Stefania Pirozzi (Rome Golden Flames / CC Naples) battled it out with Luisa Trombetti (Rome Golden Flames / RN Torino) for first. Pirozzi was out first with a 1:01 butterfly leg, putting her a full second ahead of Alessia Polieri (Yellow Flames / Imolanuoto). Pirozzi built her lead to over 2.7 seconds after the backstroke; Polieri was still in second.

The only disappointment for the crowd, and for the participants, was that there were no qualifiers for Kazan.

With defending champion Gabriele Detti and Mitch D’Arrigo out of the race, the field was wide open for Gregorio Paltrinieri (Golden Flames / Coopernuoto) to win a national title. The 20-year-old swam an even race, splitting 1:53.0/1:56.3, finishing with a final time of 3:49.30. Second place went to Damiano Lestingi (CC Aniene) in 3:51.58, while Samuel Pizzetti (Carabinieri / Milanesi) picked up the bronze medal in 3:52.31.

While the 400 IM was exciting in that down-to-the-last-hundredth kind of way, the 200 back gave the audience different kinds of thrills. Federica Pellegrini, who swam a 2:09.40 in prelims during the morning session, pulled out of finals to give someone else a chance to make the Kazan team. No other entrant, though, had ever been under 2:10.

It was Margherita Panziera (CC Aniene) who rose to the challenge. The 20-year-old got out front right away, turning at the 100 in 1:02.9. She brought it home in 1:06-mid for a total of 2:09.63, getting under the Kazan standard by .07. Panziera thus becomes the third Italian woman in history to break 2:10, after Alessia Filippi and Pellegrini. This will mark Panziera’s first time on the Italian National Team.

Finishing second in 2:11.95 was 14-year-old Giulia Ramatelli (Yellow Flames), who improved her personal best time by 2.3 seconds and broke the Italian Junior Record by .6. The previous Italian Junior mark of 2:12.52 had been set by Valentina Lucconi in Rome in 2008. Carlotta Zofkova (Forest / Imolanuoto) was third in 2:12.81.

The top three finishers put on a great race. Defending champion Christopher Ciccarese (Rome Golden Flames / CC Aniene) turned first at the 50, with Sabbioni, gold medalist in the 100 back, just off his shoulder. Mencarini was .7 behind Ciccarese and .6 behind Sabbioni. At the 100, Mencarini had caught Sabbioni and now trailed Ciccarese by a full second. Over the next 50, he narrowed Ciccarese’s lead to .6, and over the last 50 meters, Mencarini motored home. He finished nearly 2 seconds faster than Ciccarese, touching the wall in 1:57.45, a personal best by .27.

Italian record-holder Ilaria Bianchi (Yellow Flames / Blue 91) went 58.17 in the morning to lead the qualifiers in prelims but only managed 58.26 in the evening. Although she won the event by 1.2 seconds, Bianchi was dissatisfied with her racing. She told the press afterwards, “Unfortunately I wasn’t able to swim a good second half. Going out in 27.3 was in line with my expectations. The goal was to go under 58 seconds. I felt good in the water. I am a little disappointed.”

Elena Di Liddo (CC Aniene) placed second in 59.44, just ahead of Claudia Tarzia (Genova), who came in .04 later with 59.48. The two traded stroke for stroke the entire race but Di Liddo had a slight edge on the back half.

Perhaps the most exciting racing of the evening came in the relays. For one thing, both Luca Dotto (Forest) and Michele Santucci (Blue Flames) went under the Kazan qualifying standard leading off their respective teams’ relays. Dotto went 48.40, .10 faster than Marco Orsi’s winning time in the 100 free on Day One. Santucci went 48.84, just .04 under the Federation’s standard for making a relay.

It would be hard to conceive of a more exciting end to Day Three of the National Championships than what ensued in the women’s 800 free relay. CC Aniene, swimming in lane 5, out-touched Rome Golden Flames, in lane 4, by 1/100 and both teams finished well under the previous club record.

Federica Pellegrini led off for CC Aniene with 1:56.88, more than a half-second under the Federation’s cut for making the Kazan squad. She built up more than a 3-second lead over the field and was followed by teammates Rachele Ceracchi (2:01.00), Miriana Durante (2:02.25), and Margherita Panziera (2:00.89).

Meanwhile, Rome Golden Flames put their two fastest swimmers at the end of the relay, and they kept gaining on the leaders until the very end, finishing short 8:01.02 to 8:01.03. And this, despite a 1:59.53 from Diletta Carli and a 1:59.66 from Stefania Pirozzi.

Anne Lepesant, I love your writing! Under the Women’s 400 IM…
“But in that great equalizer known as breaststroke…” Well said! 😉