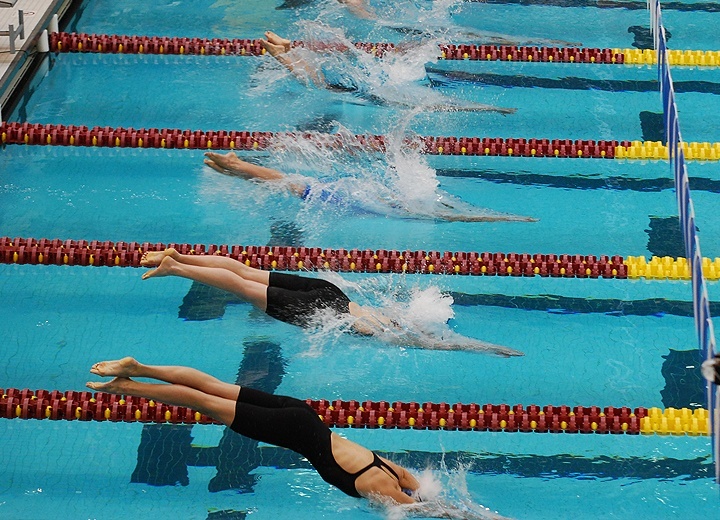 Follow along for live updates from finals of day 2 at the 2014 Young Olympic Games in Nanjing, China. Stock photo via Janna Schulze/SwimSwam.com

We have an exciting evening (or morning, for those of us in North America) of racing ahead of us in Nanjing, China on day two of the Youth Olympic Games. Kicking off the second night of finals will be a very tight field in the men’s 100 backstroke, which will see Junior World Record holder Apostolos Christou looking to take home gold and defend his junior world record from possible jeopardy. With Christou seeded fourth after last night’s semi-final, Simon Sabbioni and Guanyuang Li will be the biggest threat to his record. The pair qualified first and second respectively, touching in 54.48 and 54.52.

The women’s 50 breast will be another race to watch, as current world record holder Rūta Meilutytė will look to add “Youth Olympic Gold Medalist” to her already voluminous list of accomplishments. Meilutytė has the top seed heading into finals after cruising to a time of 31.67 in last night’s semi. We might not see a world record out of her tonight, though you certainly can’t count out the possibility.

We’ll see an awfully tight race in the men’s 200 IM, highlighted by Hungarian duo Ben Gratz and Norbert Szabo facing off against American Patrick Mulcare. The three men are separated by less than a second following today’s preliminary heats. It will take a pretty huge swim to take down Gunnar Bentz’s sub-2:00 junior world record, but we’ll likely see someone come close after the top three men were all under 2:03 in prelims this morning.

We saw an exciting finish in the men’s 100 back to start things off this evening, with Russia’s Evgeny Rylov and Italy’s Simone Sabbioni tying for the gold medal in a time of 54.24.  Guangyuan Li of China locked up the bronze, touching the wall in 54.56.

Liliana Szilagyi of Hungary had full control over the women’s 200 fly, winning handily in 2:06.59. The time is not eligible for the Junior World Record as Szilagyi was born in 1996, but it’s still a very impressive time for the next in a long line of great Hungarian 200 butterfliers. Her mark was well under Natsuki Akiyama’s 2008 junior record time of 2:08.10. In fact, Szilagyi just recorded the third fastest performance this year in the 200 fly. Earning silver was Yufei Zhang of China, touching in 2:08.22. Getting onto the medal stand in third was Australia’s Brianna Throssell, with a bronze medal time of 2:09.65.

Italian Nicolangelo di Fabio was the gold medalist in a very tight men’s 200 free final. Di Fabio out-touched Kyle Stolk of the Netherlands who took silver in 1:48.59, and German Damian Wierling who settled for bronze in 1:48.91.  American Patrick Mulcare settled for 8th, touching in 1:50.57.

Not surprisingly, Lithuanian superstar Rūta Meilutytė took home gold in the women’s 50 breast with a blistering time of 30.14. Meilutytė seemed to shut it down the last 5 meters and was well over a second in front of silver medalist Julia Willers of Germany who finished in 31.78.  Hungary’s Anna Sztankovics took the bronze medal in 31.84.

China’s Zhuhao Li powered his way to a top seed time in the 100 fly, thanks in part to a very boisterous home crowd.  Li’s time of 53.26 is just ahead of Russia’s Aleksandr Sadovnikov second place time of 53.42.  Switzerland’s Nils Leiss sits in third after putting down a semi-final time of 53.52.

China’s Yuhan Qui will have the top seed heading into finals after laying down a 54.78 in tonight’s semi.  Australia’s Ami Matsuo isn’t far behind, sitting in second at 54.98. Both girls will likely flirt with the junior world record tomorrow night.

In what turned out to be the closest finish of the night, American Clara Smiddy took home the gold in thrilling fashion with a time of 1:02.22.  Great Britain’s Jessica Fullalove was just one one-hundredth of a second behind Smiddy with a silver medal time of 1:02.23. New Zealand’s Bobbi Gichard was also dangerously close behind, wrapping up the bronze medal with a time of 1:01.25.

Though not a great time, this is where the Americans expected to shine at the meet with a roster heavy with backstrokers.

Hungary’s Benjamin Gratz went on to take gold in the men’s 200 IM final with a time of 2:01.08, just over a second in front of silver medalist Povilas Strazdas of Lithuania (2:02.32).  Gratz’s countryman Norbert Szabo took the bronze medal, touching the wall in 2:02.47.  America’s Patrick Mulcare just missed the podium, taking fourth in 2:02.88.

The Chinese quartet of Yun He, Yuhan Qiu, Duo Shen and Yufei Zhang took gold in the women’s 4×100 junior world record with a sizzling 4:03.58. While faster than the Junior World Record, it won’t count as one because Yun He was born in 1996 and is thus too old for the Junior World Records. Australia and Great Britain had a duel for silver, with Great Britain coming out on top in 4:05.75. Australia would touch the wall in 4:06.38.

China will never become #1 swimming country in the world simply because their swimmers’ lack of size. To become 1, they have to dominate most all-distance events for both Men and Women and I don’t see that happen anytime soon. They might win a few mid to long distance races here and there like they do now in international meets where that doesn’t matter.

Hey SWIMDAD, don’t underestimate the Chinese. They are on the RISE… You say China will never become the #1 swimming country “simply” because of size? I concur, the Chinese are generally smaller than the rest of the world, however, i want to contend that size in swimming does not correlate with necessarily correlate with speed. a). look at the Japanese (KOSUKE stood at 5’7) b). yes, size may be beneficial in sprinting but look at Vladimir Morozov. Back to your point about size, look at Sun Yang… who stands at an astounding 6’6.

Nations choose their athletes based on various parameters. This comp also gives new officials & support staff a chance to get international experience & hopefully some comeradie .

Besides the sport it has got to be an excellent exposure to how China does things . When they take over the world , these kids will be able to say – Yeah I knew that. The rest of us will be perplexed – wth happened ?

Very good day for us. willers winning bronze although she was already faster this season, will be difficult for her to win a medal in 100/200 breast. wierling with a huge pb in 200 free, actually hes better in 50/100 free.

Im surprised wierling was this fast in 200 free, he improved his pb by over 1s, but i really doubt he will win a medal in 50/100 free. His highlight this year was the european juniors 2 months ago, so i dont think he will be able to swim as fast as he can for the rest of the meet.

Just saw that Marek Ulrich improved his pb in 100 back again, 55.42 from 55.55 (before the meet it was 55.62:)). Hes not progressing very fast, but he improved about 1s this year, i think thats ok at his age. I wouldve liked to see all countries with their best medley relays, germany (probably many other countries too) had noone for fly and freestyle + only their second best athlete in backstroke, so i think 4th place is ok.

By the way: Were are the 100m breast male results? The final was also in this session.

Brazil is also without the “best team” for medley relay.. Pedro vieira is a 53,3 100 flyer already.. Altamir is a 55 fly swimmer.. On breast pedro cartona is 1 second faster than Mickosz. So Brazil is losing at least 2,5 to 3 seconds

Chinas is simply too strong to every other country. We are already leading and we will dominate the competition very easily. Swimming is going to look like diving very soon, only chinese swimmers winning medals. Just wait and see…

You mean the girls freestyle and boys 100 fly. Liliana crushed the chinese girls. Chupkov broke the jr world record. Santana is far ahead too. What else china can win on pool? Cant see anything

Easy when the biggest swimming countries show no interest in that meet.

You mean countries like France? Germany is taking it serious (already 2 medals), so maybe this chinese guy should rather look out for new swimming superpower germany:) Swimming will soon be like soccer, complete german dominance (22 men chasing a ball for 90 minutes and in the end germany always win -> 8 men swimming in the pool for xy minutes and in the end the german guy always wins:))

Bobo Gigi
China finished second in 2011 World Championship, 2102 Olympics and 2013 Worlds, so China is not a big swimming nation?? Very nice. In a China x France meet, France would be completely crushed. Only USA is stronger now. But just wait, China has the best juniors in the world and, like I said before, it is just a question of (very) little time to China become number one.

Even if tha would be true, what exactly do you want to hear? What are you up to?

I am Chinese but this guy just tries to be annoying.

Where are all the top Chinese swimmers when it comes time to swim with the big boys and girls at the Pan Pac starting later this week?

Without defending the gut china focus on asian games. And at least ye sun and the 200 female flyers are much better than the big guys and girls of pan pacs.

It looks like Patrick Mulcare is having some valuable learning experiences! Racing 100 back, 200 free and 200 IM FINALS in the same session at the international level?! What genius coach thought he’d be successful trying that? Don’t these kids have any supervision over there?! His backstroke time was slow, which makes me wonder if he slipped on the start, but he did his best in the freestyle and managed to get 4th in the IM to end the session. Good job Patrick; some lucky coach in the NCAA is getting a truly versatile workhorse competitor this fall!

Congratulations to Clara Smiddy for racing to the closest possible win in the 100 back! 🙂

I hope US Swimming is enjoying… Read more »

Based on the limit, or you have a good freestyle relay or medley.. impossible to get both..