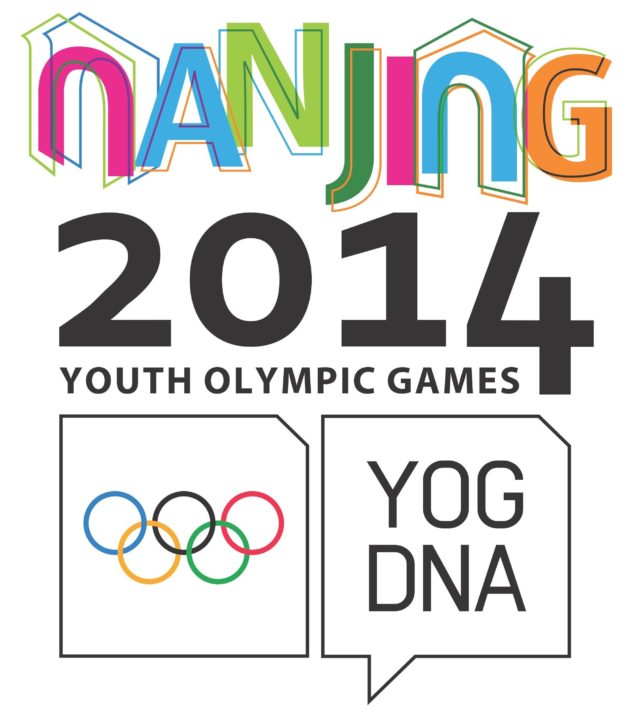 Thursday at the 2014 Youth Olympic Games, the 5th day of competition, included the men’s 100 free prelims semi-final rounds, which have looked all week more-and-more like they would be the premier event at this meet.

Thus far, however, (1) they’ve been a bit of a letdown. Brazil’s Matheus Santana is the top overall seed in 49.30 – about a second short of his Junior World Record time. One of his primary challengers, Dylan Carter from Trinidad & Tobago, scratched the 100 free and focused on the 50 fly final (where he was 2nd), Australia’s top age group swimmer Kyle Chalmers failed to reach the final of the 100 free; and China’s Yu Hexin was controlled, at best, to a 50.26.

But have no fear! We’re confident that some of these swimmers will turn up in finals. Yu had this race right before the 50 fly final (which he won), so a hesitant swim is understandable. Santana was out very well in 24.02, and looked in both prelims and finals like he shut himself down a little under the flags. Dutch swimmer Kyle Stolk, the 2nd seed, was only a tenth away from his lifetime best in the event. Here’s hoping for this event sending the Youth Olympics swimming portion out with a bang on Friday.

In the women’s 400 free relay, the top three teams were all outstanding. Silver-medalists (2) Russia had Daria Ustinova split 54.85 on their relay, which their senior women could have certainly used at the European Championships, where they finished only 4th.

We’ll find out later this weekend where the time of Ami Matsuo anchoring Australia in 53.91 will place her in regard to Australia’s women’s free relay.

(3) Egypt won their first Youth Olympic Games swimming medal of any color when Akram Ahmed won gold in the 800 free in 7:54.29. He’ll be heading to the United States after this meet to begin his college career at South Carolina, and under the watch of new Gamecocks assistant Mark Bernardino, former architect of the Virginia middle-distance dynasty, he should only continue to get better.

The Egyptians, despite the well-told political troubles, have continued to grow the swimming program. While most of their elites end up in the United States for college (Farida Osman at Cal, Mohamed Hussein at UMBC), Egyptian National Team head coach Sherif Habib is doing a fantastic job of developing home-grown talent and training swimmers both to where they’re attractive to NCAA coaches, and to where they’re ending up on international podiums.

While the situation in Egypt seems to be far from stable, the country is in the midst of a renaissance. Without overstating the importance of sport, sport is absolutely culturally important in the world that we live in. Maybe swimming can become “that sport” for Egypt. At the very least, this success should be good for swimming, as it  further penetrates into an African continent where it is not on most sports fans’ radars.

The Italians are swimming very well at the European Championships, and while a ton of their young talent is on display there, their Youth Olympics team is swimming very well also. (4) Alessandro Bori won his semi in the men’s 100 freestyle in 49.91, and is next in line in what seems to be a revolving door of Italian sprinters who can go 49’s as teenagers.

But with both the men’s sprinters and everyone else, the Italians have been very good at developing fantastic 19-20-21 year old swimmers who never seem to be able to get over that hump and land on international podiums. At some point, the breakthrough will happen though. The tide of young Italians is too great to be held back much longer, and as the depth continues to improve, the swimmers will continue to be pushed to new levels.

There were (5) no Americans on podiums on Thursday, with Clara Smiddy tying for 4th in the 50 backstroke being the closest they came. She also swam to a 16th place finish in the girls’ 50 free.

Overall, not a great day for the Americans, but they’re hoping that they’ll get some momentum in the morning. That’s where the boys’ heats of the 200 backstroke will be swum, and where Patrick Conaton and Patrick Mulcare, the top two finishers at Junior Nationals, will swim. The American boys’ swim team has never won an Youth Olympics medal, and Friday could be their day. Based on seeds, we can expect it will take under two minutes to get to the podium, however.

The link below goes to the selection process of USA swimmers to the Youth Olympic Games.

Congrats to the USA women who showed up for the 4×100 free relay and improved on their prelim time!