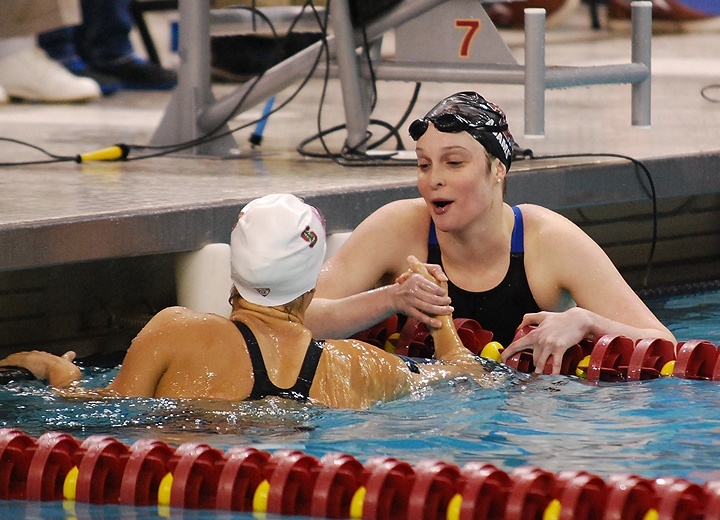 Cammile Adams (right) and Maya DiRado (left) will battle it out in the meet's final individual event - the 200 fly. They both represented the U.S. in that event at the 2013 World Championships. Current photo via Janna Schulze/SwimSwam.com

The 2014 Women’s NCAA Championships are on to their final session on Friday night in Minneapolis, Minnesota, and Georgia will enter with a 72-point lead over the second-ranked Stanford Cardinal. With the mile still to be factored in, we expect that lead to grow on the final night of this meet, and ultimately it would take a collapse of all-time, all-sports, historical levels for anybody to catch the Bulldogs after the work they did in prelims.

The night will start with the 1650 free, a race that will be without the NCAA Record holder Stephanie Peacock. Next up, Virginia’s Courtney Bartholomew will try and stave off the likes of Liz Pelton, Elizabeth Beisel, and Sinead Russell in the 200 back. Next up, Missy Franklin will be looking for her second-straight win, and a reclaiming of her 17-18 National Age Group Record, but to do so she’ll have to overcome Arizona’s Margo Geer: the third-fastest swimmer in the history of that event.

The 200 breast will see A&M’s Breeja Larson try to win her first career 200 breaststroke NCAA title (hard to believe), and right after that Larson will watch her teammate Cammile Adams trying to defend her title in the 200 fly.

The session will close with the purest race in college swimming: the women’s 400 free relay. There, the Arizona women had a great swim in the morning, but someone’s going to have to come close to a record to win in finals.

All the links you need, including live stream and live results, to follow the meet are here.
Day 3 up/downs and scoring projections can be seen here.
Day 3’s prelims recap is available here.

That’s four wins in the last six years in this event for the Bulldogs.

Her teammate Amber McDermott took 2nd in 15:40.27, which by most standards is a great swim as well. She was one of five swimmers in this race that were faster than Haley Anderson’s winning time last year.

Minnesota’s Kiera Janzen was 7th in 15:57.38 – another time out of the early heats. Janzen went out very hard in this race, hitting at 4:47 in the 500, and though she had a nice kick at the end, she trailed off a bit through the last third of the race.

It was Indiana’s Brooklynn Snodgrass early push that sealed her the win in the 200 backstroke tonight, marking two-straight wins for Canadian swimmers. She had the lead at the 100 mark, and her third 50 is what gave her enough cushion over Cal’s Liz Pelton and Virginia’s Courtney Bartholomew.

Snodgrass’s winning time was 1:50.52 — just over the efforts of Pelton, 1:50.55, and Bartholomew, 1:50.84. Indiana won this event in 2010, when Kate Fesenko beat out Florida’s three-time champion at the time, Gemma Spofforth, and four years later they’ve found themselves back on top of the podium.

Pelton was the defending champion and was almost three seconds slower here than she was to swim the fastest time ever last year.

Florida’s duo Sinead Russel and Elizabeth Beisel were 4th and 5th, respectively, in the heat at 1:51.65 and 1:52.21. Beisel still has another race later this session, in the B final of the 200 butterfly.

Vitarius’ teammate Aubrey Peacock won the B Final in 1:52.37 – that would have put her 6th in the A-Final.

After failing to defend her NCAA title in the 50 on the first night of this meet, Margo Geer of Arizona captured the 100 freestyle title tonight in 47.10. She sent an early message this morning when she posted a 47.00 to move to 3rd on the all-time . Geer had the lead at the 50 in a split of 22.52 and never looked back as she won her second title in the event this year.

London Olympians Lia Neal and Missy Franklin were second and third. Neal had just a .01 lead on Franklin at the turn, but she was able to hold on and extend it as she finished at 47.17 and 47.26.

Natalie Hinds, who finished third in this event last season, was fourth, 47.40. Hinds finally got into the A final in this event, after having some troubles getting into that top eight all weekend.

Kasey Carlson of USC finished off her individual NCAA career with a 6th place, 47.86. Stanford’s Maddy Schaefer put herself into the mix with a 22.98 opening split, which was third best overall, but finished seventh in 47.98.

Lindsay Gendron of Tennnessee was eighth at 48.06 — and she still has the finals of the 200 butterfly at the end of the session.

Notre Dame’s Emma Reaney, who has visibly the most efficient stroke in the water, took the women’s 200 breaststroke title, her first NCAA title, in 2:04..06, and in the process broke her own NCAA, U.S. Open, and Championship Records in the event.

In the process, she beat Breeja Larson of Texas A&M, who was a 2:05.88 for 2nd to tie with Stanford’s Katie Olsen. Larson, who is one of the greatest breaststrokers in NCAA history, will now graduate without a title in this 200 (though she’s won three-straight in the 100).

Minnesota’s Kierra Smith was the Gophers’ second First-Team All-American of the day, placing 6th in 2:06.76, with Wisconsin-Milwaukee’s Emily McClellan (2:06.98) and Georgia’s Annie Zhu (2:07.98) rounding out the A-Final.

Texas A&M’s Cammile Adams almost got “Cammile Adams’ed” on this women’s 200 fly, but her lead going into the final 50 of the women’s 200 fly wound up being enough for her to win her second-straight title in the 200 fly, and end her NCAA career on top of a podium.

As for the reverse treatment, Adams was at a 1:23.08 going into the final turn, while her Worlds teammate Maya DiRado was in 6th and over a second back.

Adams usually has the fastest closing 50 in any given race yards where she’s not racing Katinka Hosszu, but her 150 split at NCAA’s was more ambitious than she’s been. She turned three-tenths better than her swim at SEC’s, where she was actually a few hundredths faster overall.

Though Adams’ closing split of 29.17 was still very, very good, Stanford’s DiRado was a bit faster in 28.82, but as we said, Adams’ lead was insurmountable by that point.

Tennessee’s Lindsay Gendron, in her second individual final of the night, placed 3rd in 1:53.05, followed by Louisville’s Kelsi Worrell, who closed much better than prelims en route to a 1:53.63.

Kentucky’s Tina Bechtel finished off her breakout season with a 5th-place finish in 1:53.65 – a lifetime best for her.

USC junior Haley Ishimatsu won her second-straight NCAA Championship on the platform with a score of 365.15, topping Emma Ivory-Ganja by about 16 points. Ivory-Ganja has made a big immediate impact on Texas after transferring from UCLA last year, and Texas’ diving squad will continue to be a force in the future.

Georgia’s Laura Ryan finished third on the platform, after winning the 1m and 3m titles earlier in the weekend. Ryan’s performances would earn her Diver of the Year.

The championships were capped up with another thrilling race. Arizona lead with her big gun, Margo Geer, tonight versus her being in the second spot in the morning session. Geer hit the pool hot, and swam to a 46.86 lead off swim – much better than her individual swim earlier, and just .2 off the NCAA and U.S. Open Record from Arianna Vanderpool-Wallace, and just .02 off the American Record from Natalie Coughlin in 2011.

Maddy Schaefer led off for the Cardinal in 47.91, and Felicia Lee brought the Cardinal back into the game with her 47.92 split against Alana Pazevic’s 48.20.

Things got even more interesting after the third leg, as Cal was behind nearly two seconds from Arizona and a second from Stanford, Missy Franklin dove in to split 47.08, and bring the Bears back into the mix heading into the final 100 yards. Between Stanford, Arizona and Cal, just .8 seperated the three into the final push.

But Lia Neal and Grace Finnegan went head-to-head, and Neal literally fit the expression perfectly of “putting your head down and get your hand on the wall”. Neal looked like she didn’t breathe for almost a half of a lap, which surged the Cardinal ahead of the Wildcats, as her 47.14 was good enough to beat Finnegan’s 47.93, to win the event.

A full breakdown and analysis of scoring can be found here.

Can someone give lanes for this mile??? who is where?

Lanes are you watching it somewhere? Is ESPN3 the only place to watch??