Things are heating up after two days of the 2014 Women's Ivy League Championship at the Katherine Moran Coleman Aquatics Center at Brown University. Harvard has taken over the lead from Princeton, and Yale has successfully held onto the third spot over Columbia. But it's a very close contest and the outcome of the meet could come down to the final relay. Stock photo via The Ivy League

As we mentioned before, we were expecting this to be a big day for Harvard and Columbia, with some of their strongest events occurring in today’s program. As expected, therefore, Harvard took over the lead from Princeton. But in a surprise move, Yale managed to hold onto third over Columbia.

1000 free: Sherry Liu of Harvard won with a pool record time of 9:43.53. The Yale duo of Eva Fabian and Isla Hutchinson-Maddox were also under the previous pool record, taking second and third, respectively.

400 IM: Everyone expected a fairly standard victory from the 2013 Ivy Champion Alena Kluge of Columbia, who had not only won yesterday’s 200 IM but also had broken the pool record in the 400 with her 4:15.79 prelims swim this morning. 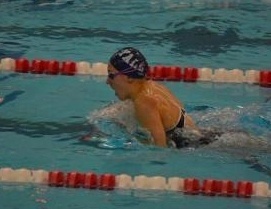 But no one told that to Yale’s Emma Smith and Princeton’s Beverly Nguyen. Nguyen took it out fast and had built up 8/10 of a second lead at the 200. But Smith closed the gap with a strong breaststroke leg, and nailed the free to finish 4:15.17 to Nguyen’s 4:15.65. Both Smith and Nguyen came in under the pool record time set in prelims, and both recorded NCAA “B” times. Kluge was two seconds back in third. She, and Courtney Randolph of Yale, also picked up “B” cuts.

100 fly: Top seeded Nikki Larson of Princeton shaved another .4 off her prelims time to win in 52.73, making it a total of nearly two seconds dropped from her entry time. Her teammate Morgan Karetnick secured a second-place finish thanks to a very strong second half. She was fifth at the 50 and third at the 75, but ended up a half-second in front of Columbia’s Christina Ray, who took third.

200 free: Shelby Fortin of Penn broke the first meet record of the weekend with a 1:45.69 in the 200 free. Fortin lowered the Ivy mark by nearly a second; it was 1:46.39, which Harvard’s Kate Mills had set in 2009. Fortin also broke the pool record and her own school record, and secured a “B” cut as well. Yale freshman Kina Zhou took second, also under the pool record and also with a “B” time. Harvard’s Victoria Chan was third.

100 breast: Top seed and 2013 Ivy runner-up Mikaila Gaffey of Columbia won in a pool-record time of 1:01.05. Briana Borgolini of Brown took second, and Jennifer Shahar of Columbia was third. The top five all made the NCAA “B” standard.

100 back: This was the race we were looking forward to. And what a way to end the evening’s individual events. Three-time Ivy Champion Lisa Boyce of Princeton was out first at the 100, but Harvard’s Danielle Lee overtook her at the 75. Boyce outsplit Lee in the fourth 25 but fell short of victory by .02. Lee won 52.83 to 52.85. Both were under the pool and meet records. Harvard’s Marissa Cominelli took third. The top five finishers all achieved NCAA “B” cuts.