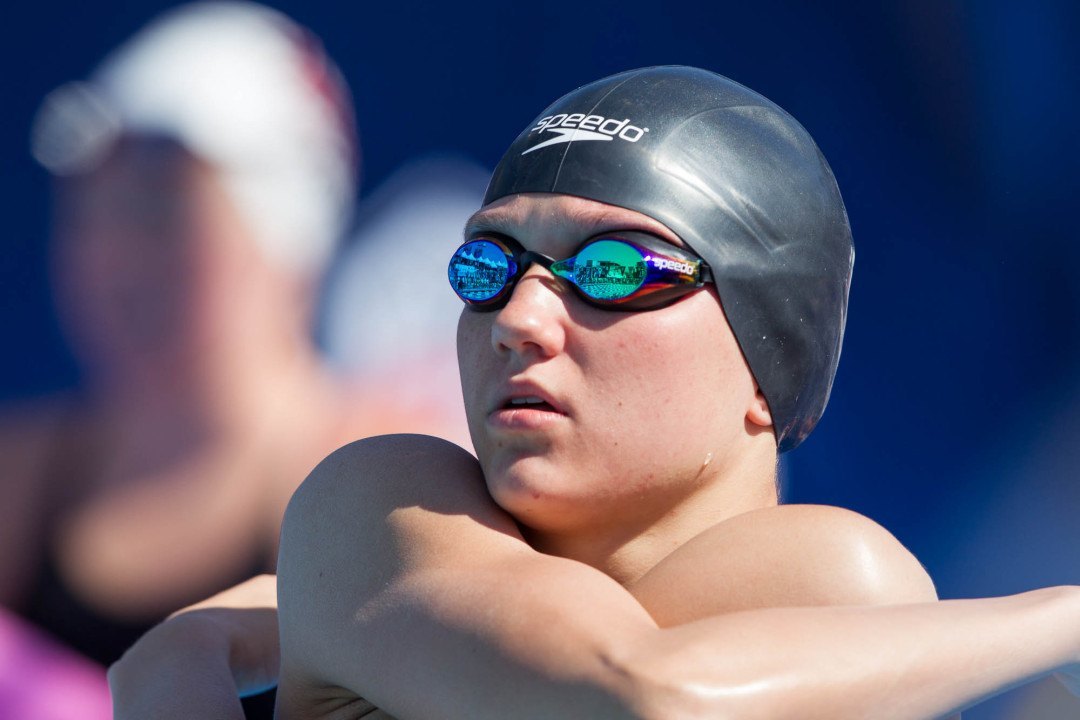 To see all of the 2014 Swammy Award winners, presented by TYR, click here. 2014 Honorees: Katie Drabot and Sean... Archive photo via Tim Binning/TheSwimPictures.com

If you’ve been following along as we’ve released our 2014 Swammy Award winners for age-group swimmers, you may have noticed that there is truly outstanding youth swimming in every corner of the United States. This group of 15-16-year-olds provides us the opportunity to shine the light on several more regions that are developing exceptional athletes.

2014 was quite a year for Katie Drabot. The Cedarburg High School junior established herself as one of the country’s best 200 freestylers, in short-course yards, short-course meters, and long-course meters. Drabot began the year with an outstanding NCSA Spring Championships meet, winning the 400y IM and placing in the top-8 in the 50/100/200y free, 200 breast, and 200y IM (she also finaled in the 500y free and 100y breast).

Drabot’s fall was equally impressive. Traveling with USA Swimming’s 18 & Under World Cup team, Drabot went 1:54.45 in the SCM 200 free for a third-place finish in Tokyo, and 1:54.32 for a silver medal in Singapore. Her performances ranked her fourth in the world and led to an invitation to compete in the individual event at the 2014 Short Course World Championships in Doha. (Drabot had already been named to the team but had been scheduled only to participate on the 800 free relay.)

Two weeks after the World Cup tour, Drabot was back home leading Cedarburg High School to a second-place finish at the Wisconsin Girls Division 1 State Meet. She won the 200 and 500 freestyles, lowering her own state record in the first (with 1:45.40) and smashing Aja Van Hout’s record in the second (with 4:43.09).

When you think about how much experience Becca Mann has on the national and international scenes, it’s hard to believe she was still only 16 for 11 months in 2014.

Beata Nelson was the only non-Katie Ledecky national age group record-breaker in 2014 in the girls’ 15-16 age bracket. Five days after lowering her own Wisconsin state high record in the 100 fly and eclipsing Katie McLaughlin’s NAG of 51.78 with a 51.70, Nelson whacked another .62 off her time at the Arena Grand Prix at Minneapolis to settle the new NAG at 51.08.

Allie Szekely had a terrific summer and an even better fall. If we were to give a Perseverance Award, Szekely would be in contention after her performances at Speedo Junior Nationals last summer. As a 14-year-old, Szekely had blown everyone away at 2012 Juniors, winning the 100m breast, 200m breast, 200m IM, and 400m IM. She set a meet record in the 200 breast and finished with 92 points, second only to Gillian Ryan, two years her senior. After a disappointing 2013 long course season, Szekely came back in 2014 with renewed purpose and won… the 200m back. She finished second in the 200m IM, fifth in the 100m breast, and 24th in the 100m fly, and earned 2016 Olympic Trials cuts in 200 back, 100 breast, and 200 IM.

Get ready to see this name a lot in 2015; Sean Grieshop will be 16 for most of it and if he continues along the path he is on right now, we should see an attack on the NAG recordbook.

Hoffer has been sub-20 in the 50y free eleven times; just when you think a 16-year-old can’t go any faster, he takes another chunk out of his NAG. The latest round came at Speedo Winter Juniors, where Hoffer went 19.45 in prelims, then 19.38 in finals to win the event and set a new NAG standard, more than a half-second under Caeleb Dressel’s old record. Hoffer’s performance in the 100 free was even more remarkable. He dropped a 43.05 in prelims to take down Dressel’s NAG of 43.29, then dropped another 4/10 in finals to become the first 16-year-old in history to break 43 seconds. His 42.67 also broke Dressel’s meet record. Hoffer didn’t stop with sprint freestyle, though. He also broke Alex Valente’s NAG in the 100 fly by a half-second, with 46.42; that time erased Joseph Schooling’s meet record from 2012 (46.70).

Maxime Rooney had 11 swims on top-ten lists for 2014, but he saved the best for last. At the California/Nevada Speedo Sectionals held at East Los Angeles College Swim Stadium in December, Rooney became only the second 16-year-old in history to swim under 1:35 in the 200y free. After a 1:35.16 in prelims, Rooney went 1:34.57 in finals to set the Sectional meet record and break Kyle Gornay’s NAG of 1:34.99.

Sweetser had a breakout year in 2014, improving by staggering amounts in his top events. In long course season, Sweetser dropped about 10 seconds in the 400m free over the course of the summer, finished 20th at Phillips 66 Nationals, and made the National Junior Team. He was also selected for his 1500, in which he dropped around 53 seconds and placed 13th.

At AT&T Winter Nationals in December, Sweetser dropped 9 seconds in the 500y free to post the top qualifying time, then finished fourth in finals behind seasoned veterans Connor Jaeger, Townley Haas, and Ryan Feeley. Sweetser lopped 17 seconds off his seed time to finish first in the slower heats of the 1650 free, and at the conclusion of finals he wound up with the bronze medal.

Surprised to not see Bilquist? She had an amazing summer season

Well-reasoned choices. For the boys, Grieshop and Hoffer are 2017 recruits and knowing that it’s early in the process, does Hoffer appear to be the more prized college recruit due to his immediate value on NCAA relays? To me, it looks like Hoffer is the early favorite to be Swimswam’s #1 2017 male recruit.

Rooney and Sweetser are 2016 recruits and both should be in the top 4 for that class, and I think as of today, Rooney might be the Swimswam #1 due to his versatility.

Man!
When I look at the 15-16’s it is scary! Every single one of these swimmers, even the honorable mentions, have such high potentials!
USA is going to be even more of a POWERHOUSE in the coming years! 🙂

I agree with both choices.
But I think that Sierra Schmidt deserved a little mention.
Also cool to see Miss Szekely back at her best and even stronger than ever.
Beata Nelson and Ryan Hoffer are short course beasts but still have everything to prove in long course.
Great season overall for Katie Drabot.
Sean Grieshop has a terrific international future ahead of him. In distance freestyle or IM. Or both. Erik Vendt like?
And Maxime Rooney is the future of US 200 free on the men’s side.

Sierra Schmidt had a great year with some outstanding races!

Whatever NAGs Sean drops in IM will not last long., His brother, Jack, will break them. Jack, turned 13 recently, just swam 200IM under 2 minutes and he is the strongest kid his age I have ever seen. He swims 200 fly same pace from beginning to end.

Grieshop is the man!