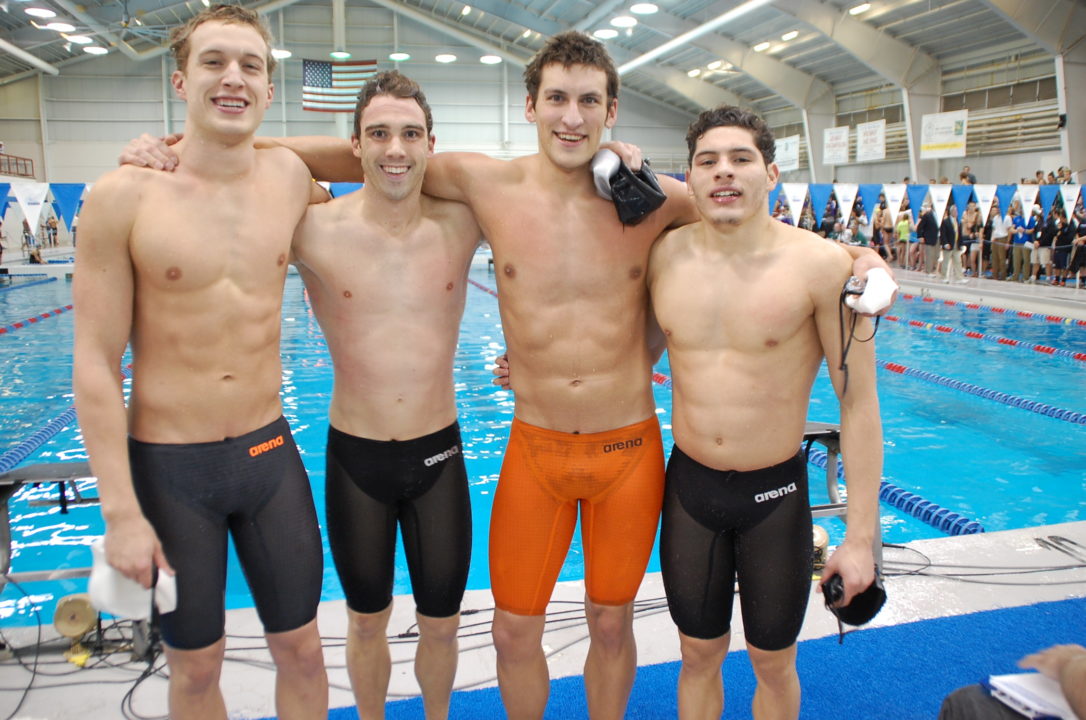 The record books will need to be seriously updated at the conclusion of the 2014 NAIA National Championships. On Day Two alone, Daniel Ramirez was responsible for two individual meet records and his team, Oklahoma Baptist, broke both of tonight’s relay records. In addition, SCAD freshman Joel Ax took down the national mark in the 200 free.

Ramirez of OBU took another .60 off his record-breaking morning swim to lower the NAIA national record to 46.13. Mark Shvartsman of SCAD and OBU’s Sullivan were nose-to-nose for 90 yards; Shvartsman got the edge and finished second in 48.54 to Sullivan’s 48.61.

OBU’s top three qualifiers were the top finishers as well, although they shuffled the deck as Gregory Penny dropped 1.5 seconds to win the title in 54.03. Vitor da Franca took second in 55.29; his teammate Tim Richard was third in 55.59.

Having already broken two national records today, Ramirez made it an even three with his 46.28 rout in the 100 back. Ramirez lowered his own meet record of 47.61 which he’d set at the 2013 NAIA Nationals. St. Andrews’ Georgi Krastev finished second in 48.76. Jacob Anderson of ONU took third with 49.70, lowering his own school record by nearly 2 seconds.

SCAD and ONU had an excellent relays as well. SCAD took second in 3:17.88 which broke their school record by almost two seconds. ONU’s third-place finish of 3:21.79 was their school’s best by 3 seconds.

OBU increased its lead as one would have expected, but exciting things are shaping up in the race for second place. SCAD inched up on ONU thanks to strong finals swims from the Bees, and they were able to keep Concordia at bay. In the meantime St. Andrews overtook Union at fifth. Cumberlands and Wayland Baptist are locked in a battle for seventh. And it all plays out tomorrow.