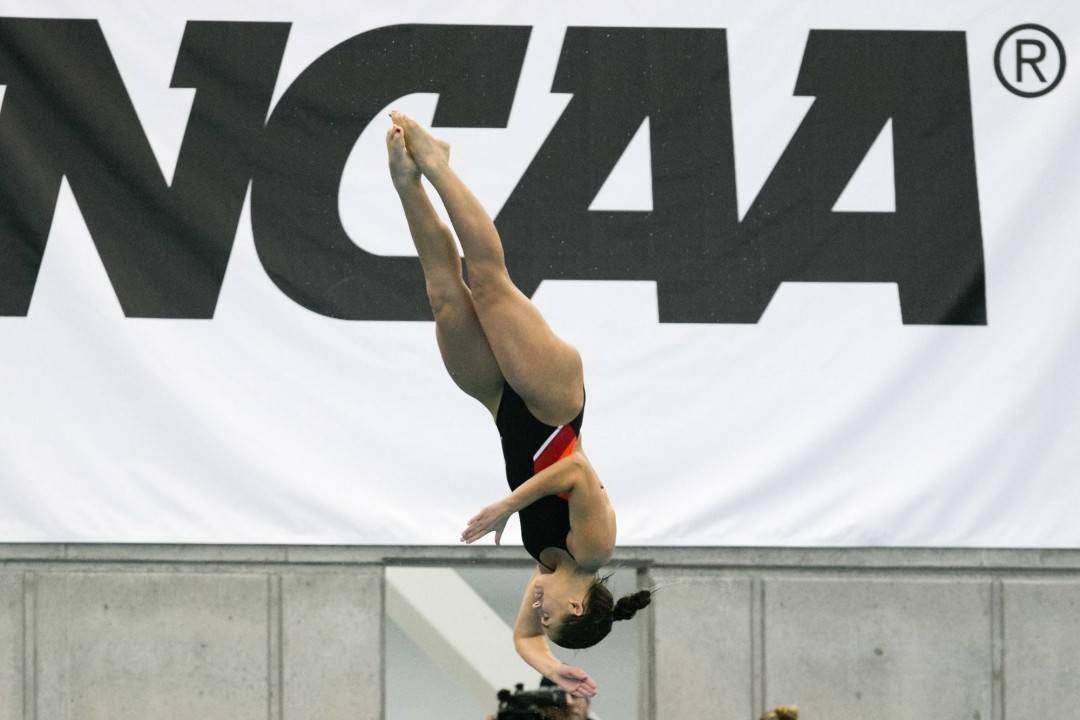 Stanford had to scratch a swimmer from their NCAA Championship roster in order to include 2016 U.S. Olympic diver Kassidy Cook. Archive photo via Tim Binning/TheSwimPictures.com

On Monday morning, the NCAA posted updated psych sheets for the 2018 Women’s NCAA Swimming & Diving Championships that had two previously-qualified swimmers scratch out.

One was expected – Stanford scratched freshman Katie Glavinovich from the meet to make room for All-American diver and U.S. Olympian Kassidy Cook. Cook scored 27 points at the NCAA Championships last year via an 8th-place finish on the 1 meter and a 3rd-place finish on the 3-meter (she doesn’t dive platform). Glavinovich was invited via a 33rd-place ranking nationally in the 400 IM (4:09.26). She had optional entries in the 200 back (55th – 1:56.22) and 53rd in the 500 free (43rd – 4:43.61). It would have taken somewhere around a second-and-a-half drop for her to have scored in the 400 IM at NCAAs. Stanford had 2 swimmers ranked 32nd in their best events (Grace Zhao, Lauren Green), who also had higher-ranked secondary events than Glavinovich.

The unexpected one came from NC State, a program riddled with injuries this season, with sophomore Ariel “Summer” Finke scratching the meet. She had a high seed of 27th in the 1650 free (16:08.20), and was also entered in the 500 free in the 67th position (4:46.87). NC State says she’s been dealing with a very severe illness over the last week that will keep her from competing.

Rather than pulling up the next-invited swimmers in the events which were scratched, the NCAA goes to a list of alternates developed based on tie-breakers, namely which swimmer that wasn’t invited from the next “row” of rankings are closest to the NCAA Championship record in a given event.

Those two spots fall to Texas A&M swimmer Caitlynn Moon in the 500 free, where she is entered with a last-chance-meet 4:40.57,and Kentucky’s Paige Kelly, who is now entered with a 16:12.90 in the 1650 free. Not coincidentally, the events where swimmers are furthest from NCAA Championship Records tend to be events that Katie Ledecky, the most dominant swimmer of her generation, holds those championship records. Moon is also entered in the 200 free (59th – 1:46.89) and 1650 free (38th – 16:17.16), while Kelly is also entered in the 500 free (66th – 4:46.06). Neither swimmers was expected to swim on any of their teams’ relays at the meet, so both are new invitees to the championship.

Texas A&M now ties Stanford with a ‘full’ roster, including divers, while Kentucky is up to 10 individual swimmers.

Texas A&M now has a hard decision about whether to scratch any of their swimmers in order to bring Raena Eldrige as a relay only swimmer. Eldrige spit a 21.84 and 22.01 on Texas A&M’s 200 medley and 200 free relays at SECs. It is likely that Beryl Gastaldello will sub in on the medley, but none of the swimmers on Texas A&M’s roster who aren’t already on the relay are capable of splitting even close to what Eldridge can split. Texas A&M now has to decide whether it is more important to maximize their 200 free relay points or bring a swimmer who is not likely to score.

I don’t believe freshmen Jing Quah was on the 200 free relay – has potential to throw down a good split. And with Gastadello on the free leg of the 200 medley with Quah in fly and they seem to be in good shape.

Jing Quah’s best 50 free time is 23.33 from the Art Adamson Invitational. I don’t see how that translates to “potential to throw down a good split.”

Potential because, being a foreigner, that was probably her first 50 free scy swim and she improved from Adamson invitational to SECs. I’m not sure about NCAA rules, but can you sit out, say, your “top 2” relay contenders for finals and then only take the top two from the morning for the night? Not that A&M can do that and still make top 8 for finals, but in theory.

LoneStar – they can. So long as the other swimmers are a part of the allowable roster, any and all subs can be made between prelims and finals. The Stanford women have done a lot of swapping the past couple of seasons.

Is Katie the only swimmer on the roster staying back?

Hi Kaez, she’s the only one that’s been dropped from the roster as of right now – not sure if that answers your question.

She’s the only swimmer from the original NCAA roster to be dropped, but there are a few others on the roster who didn’t qualify for NCs.

Poor NC State. This could of been a relatively good year for them too. Not as star-studded as last year’s with Kayla and Alexa graduated.

But with Hannah Moore leading the charge, could of been an equally high placing squad if the injuries/illnesses hadn’t plagued them come the new year :/

I don’t think they would have placed as high as last year but I agree if Kylee Perry and Courtney Caldwell were healthy and Sirena Rowe was eligible they definitely could have made a push for a top 10 spot.

Is Rowe not eligible because shes a transfer?

I think her coach wouldn’t release her to swim until next year.