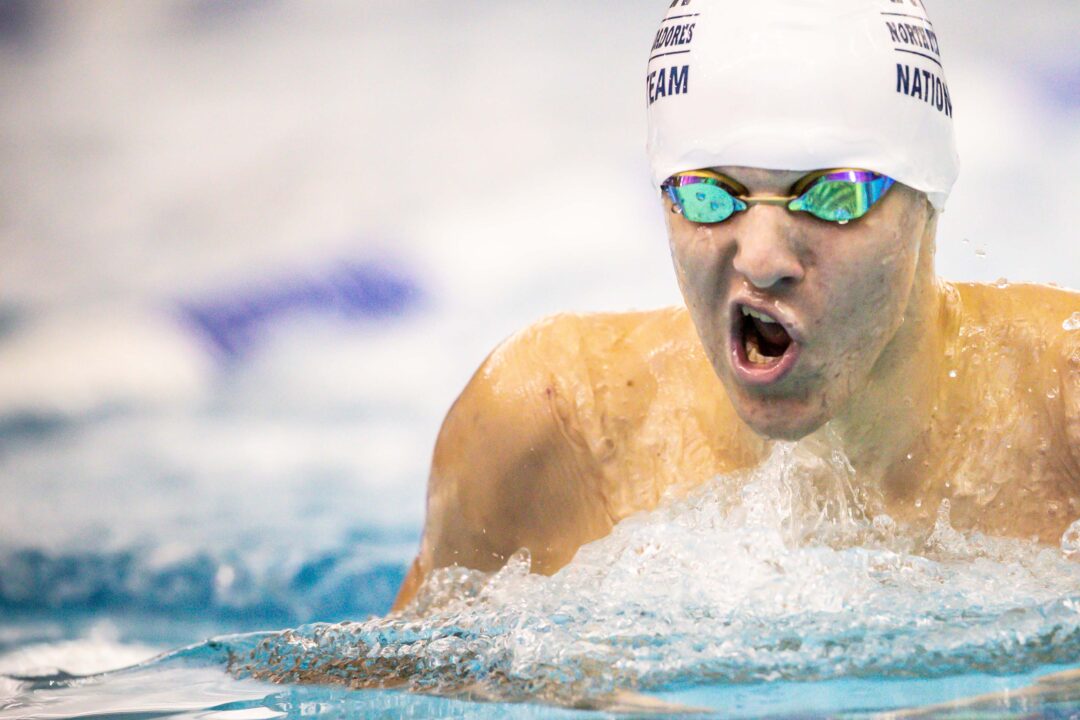 You can run, but you can’t hide. The fast swims just keep coming, courtesy of a group of teens that are rewriting the history books faster than we can write.

Tonight at the Austin location of the Speedo Winter Junior Championships, 16 year-old Maximus Williamson erased Michael Phelps’ name from the yards side of the National Age Group record books by swimming a cool 3:39.83 in the 400 IM.

That time broke the previous record of 3:42.08, which Phelps set back in 2002. That mark survived the supersuit era and the best efforts of stand out age groupers like Andrew Seliskar, Sean Grieshop, and Carson Foster, but finally fell by a wide margin to the Texas native tonight.

To provide a little more context for tonight’s swim, it appears that before Phelps, the record belonged to the great Dave Wharton, who went 3:48.56 back in 1986.

No one besides Williamson and Phelps has been under 3:44 at the age of 16. Now, Williamson is over two seconds faster than the GOAT. Much like Thomas Heilman over at the East site, Williamson has been on a tear the last few days. Wednesday, he broke the NAG record in the 200 free leading off Lakeside Aquatic Club’s 800 free relay. Last night, he swam the 2nd-fastest time 200 IM ever in the age group, and would’ve broken MA’s record had not Heilman broken it about an hour before.

Just as he had Nate Germonprez pushing him last night in the 200 IM, tonight Williamson got some competition from his Lakeside teammate Cooper Lucas. The 17 year-old Lucas, a Texas commit, actually led after the fly leg, and ended up touching in 3:42.09. That mark moves him up to #10 all-time in the 17-18 age group.

For any Phelps fans fretting over his impending removal from the yards NAG record book, fear not: he still has several LCM records in 13-14, 15-16, and 17-18 age groups.

Coincidence that 4im is MP last NAG record to fall and his 4IM will be his last WR to be broken!

I’m less concerned about Phelps than I am for Carson Foster.

Michael Andrew and Casas will still be around in other events.

I remember him saying he was devastated last time after trials. I’m already nervous for him. Is his best chance 200 fly?

The young guys internationally are crazy good also. Marchand and popovici are obvious, but there are many others.

I don’t think anyone beating him in the 4IM at us trials.

Nah Carson goated he got it

Williamson, Heilman, and Diehl very much walk the talk in the big pool

Weird day in swimming when breaking a strong Phelps record is not the biggest news of the day.

Someone need to test these kids. We are living in a simulation now

I fear that by mid-2023, Phelps will no longer hold a single Individual SCY, SCM, nor LCM World Record, in addition to not having a single American SCY NAG nor Senior Record. WILD to think about.

Well breaking 7 WRs and winning 8 Olympics golds in one week is one that he should hold onto for decades. I always wonder what Phelps true potential in each of his speciality events was if he only swam one or two of them at a major meet. Could he have broken 1:50 in the 200 LCM fly?

Not to mention his “off” events.

Maximus and Thomas decided to wake up and become the two greatest collegiate recruits ever in the same class.

They’re the next Phelps and Lochte I think. Want to see what Thomas can put up in the 400 IM now.

Not disagreeing, but isn’t Heilman to UVa basically a certainty? Why would they recruit his brother otherwise (his brother is probably a nice person but i don’t think he projects to score at ACC or NCAAs)

Would Maximus leave Tex? What is Eddie status in the picture, post retirement?

(Both of them should be looking at Bob Bowman and ASU, maybe Cal as well… But seems unlikely.)

Unrelated, but will Diehl even swim in college? Seems unnecessary for him. (i realize Diehl is not in their class.)

They’ll still be in high school for 2024 OTs/Paris Games, right?

Yes. They will be entering their senior years after that summer

Maximus wants to go to Texas