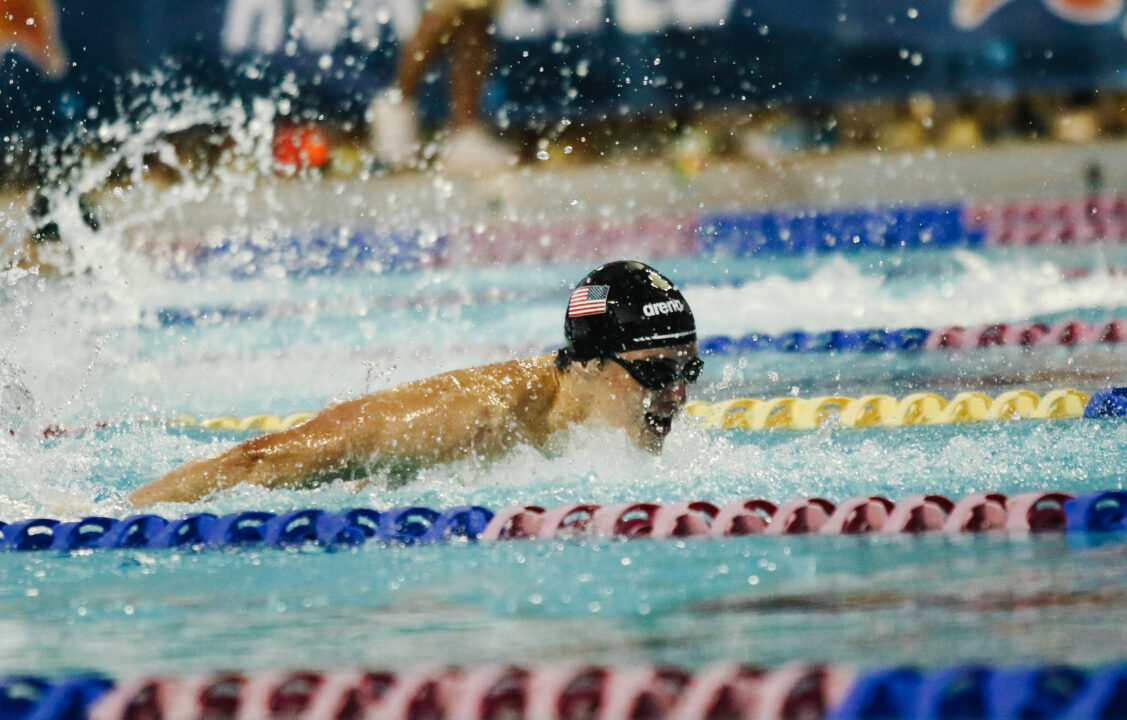 No, that’s not a typo. 15 year-old Thomas Heilman of Cavalier Aquatics continued his multi-year assault on the National Age Group record books tonight in Greensboro with a jaw-dropping, eye-popping, what-are-they-feeding-these-kids-today-inducing 44.67 in the 100 fly.

Heilman went out in 21.00, just a hair ahead of 18 year-old Scotty Buff (21.04). Buff impressed with the underwaters, but Heilman caught up by each wall, and finished hard on the final length to stop the clock in 44.67. Buff touched a moment later at 44.87.

With that time, Heilman easily cleared the 15-16 National Age Group record in the event, which was previously a 45.62, set by Luca Urlando back in 2018. Ilya Kharun had also been 45.59, but that time doesn’t officially count as the NAG record since it turned out that Kharun wasn’t an American citizen, and he now represents Canada internationally.

That’s Heilman’s second NAG record of the meet, after he obliterated the 200 IM record last night with a 1:41.71. He also split 44.95 on the Cavalier Aquatics’ 400 medley relay last night, which indicated that the NAG could go down tonight, but it didn’t necessarily presage him going as fast he did this evening. It’s tough to properly put Heilman’s times in context, but for now we’ll note that a 44.67 would’ve finished 7th at last year’s NCAA Division I championships. And again, he’s only a high school sophomore.

Besides Buff, the other four men on the above list all hit those times as college freshmen. Buff is committed to the University of Florida and should make an immediate impact for the Gators, even as a freshman.

You’ll note that Heilman’s time tonight was faster than the 17-18 age group record. From what we can tell, only one man has ever been faster in the event before turning 19. That’s Egyptian national Youssef Ramadan, who went 44.32 while swimming for Virginia Tech as a freshman at the 2021 ACC Championships.

Cavalier Aquatics is entered in the 200 free relay, and keep an on Heilman, especially if he leads off. He skipped the 50 free yesterday to focus on the 200 IM, but has a personal best of 19.78 and surely will be aiming to improve on that time if he gets a flat start tonight.

Update: Heilman did indeed lead off Cavalier Aquatics’ relay. He went 19.63, which looks to move him up to to 7th all-time in the 15-16 age group. Per the USA Swimming database, Ryan Hoffer is the only swimmer who’s been faster at the age of 15, having gone 19.54 back in 2013.

Are you not entertained?

He’ll go pro a la MP… NCAAs will be a waste of his time by the time he is 18 just like MP. He can get an education anytime later in life

The calculus on whether or not to go pro has changed massively with NIL versus when Phelps was deciding what to do.

Agree. With NIL, he’d probably make more money going to college and getting the visibility of NCAAs.

Yeah there’s really no point to go pro right off the bat if you can get an education and make money now (unless of course you REALLY focus on the distance you’re putting in). Would’ve been great for MA given his training style. I’d like to think that it also brings more eyes to the college scene and helps grow the sport as well.

I mean obviously yes, wild swim. But wait a minute:

Ilya Kharun had also been 45.59, but that time doesn’t officially count as the NAG record since it turned out that Kharun was an American citizen, and he now represents Canada internationally.

NAGs are based on international representation?

How does that…work. (Like I can’t remember but I feel like Vlad Morozov used to have some, would those have just gotten cleared 10 years later or something??)

NAG is National age Group record so yes National representation is a prerequisite.

You can hold us open, NCAA, Lsc, national championship meet records etc as a non American but not NAG’s.

Well ya, but you can hold NAGs as a 9yo.

Without doing any research, my supposition/recollection is that Morozov was eligible to represent the US up until he was 17 or 18, so any records he had earlier as a teen would’ve been counted. Don’t quote me on that, though.

WHAT THE HELL ARE THEY FEEDING THESE KIDS?!