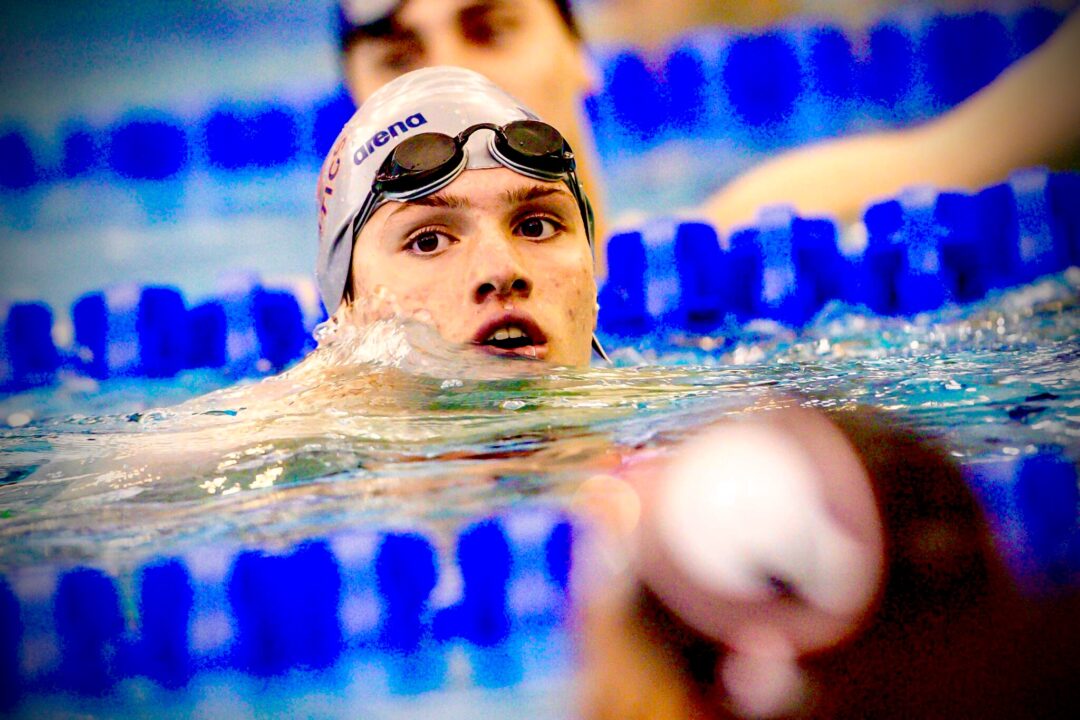 Thomas Heilman continued his assault on the age group record book by becoming the first in the 15-16 age group to get under 1:42 in the 200 IM. Current photo via Jack Spitser/Spitser Photography

You may have been expecting Thomas Heilman to take the 15-16 National Age Group record in the 200 yard IM tonight, but you probably weren’t expecting him to demolish it by a whole second.

This morning at the Speedo Winter Junior Championships-East meet in Greensboro, NC, the 15 year-old Heilman moved to #4 in the age group with a 1:43.39 prelims swim. That swim was a new personal best by over 3 seconds and put Michael Andrew’s seven year-old 1:42.77 record on watch.

Tonight, Heilman, swimming against a tough field that included 17 year-old Daniel Diehl, put on a clinic and crushed MA’s old record by well over a second with a jaw-dropping time of 1:41.71.

Heilman was faster in all four strokes tonight compared to this morning, but that freestyle leg stands out the most. His 23.88 split this evening was almost a second faster than this morning’s split, and it’s almost two seconds faster than Michael Andrew’s final leg from 2015. In some sense, that swim presaged Andrew’s eventual long course strategy, as he memorably made the USA Olympic team in this event last summer with a fly and die approach.

Tonight, Heilman leapt over both Andrew and Luca Urlando for the top spot in the age group. Here’s how that list looks at the moment.

Heilman is also an accomplished sprint freestyler, and assuming he competes in the NCAA, he and his coaches may have a tough choice to make regarding whether he swims the 200 IM or the 50 free as part of his championship lineup. It seems bizarrely early to start speculating too much given that Heilman is only a sophomore in high school, but his 200 IM tonight would’ve made the B-final at the 2022 NCAA Championships. Furthermore, to provide even more context for that 23.88 freestyle leg tonight, only two swimmers out of the 16 in the A- or B-final at NCAAs closed in under 24 seconds.

Diehl was right with or ahead of Heilman for most of the race tonight. Heilman excelled coming off of the walls while Diehl tended to catch him towards the end of each length. Ultimately, Diehl couldn’t hang with Heilman’s blistering final 50, and he ended up touching in 1:43.01. That’s a new PR for Diehl, and appears to move him to #9 all-time in the 17-18 age group, just ahead of Chase Kalisz.

It’s not the suits, it’s the internet.

I made predictions about how Heilman will do here I may have really underestimated him because he just absolutely blew away what I thought he would go in this event by over a second. Amazing swim here. Winning the 100 fly is not going to be easy as there is Scotty Buff but it should be close and great race there.

Is this Heilman’s most impressive SCY swim so far? Those 13-14 fly NAGS are disgusting but this might just be atrocious. I thought Urlando’s 2fly record was safe but idk now…

Time to move Williamson up on that Top 10 list!

The level of swimming we are seeing today from teenagers is absolutely unreal. I cannot fathom how kids this young are going that fast. Someone born in 2007 just went a 1:41 200 IM. That is insane.

Might be too early, but I can see Heilman on track to become the next Michael Phelps.

God this kid would look good in Maroon and Gold😮‍💨