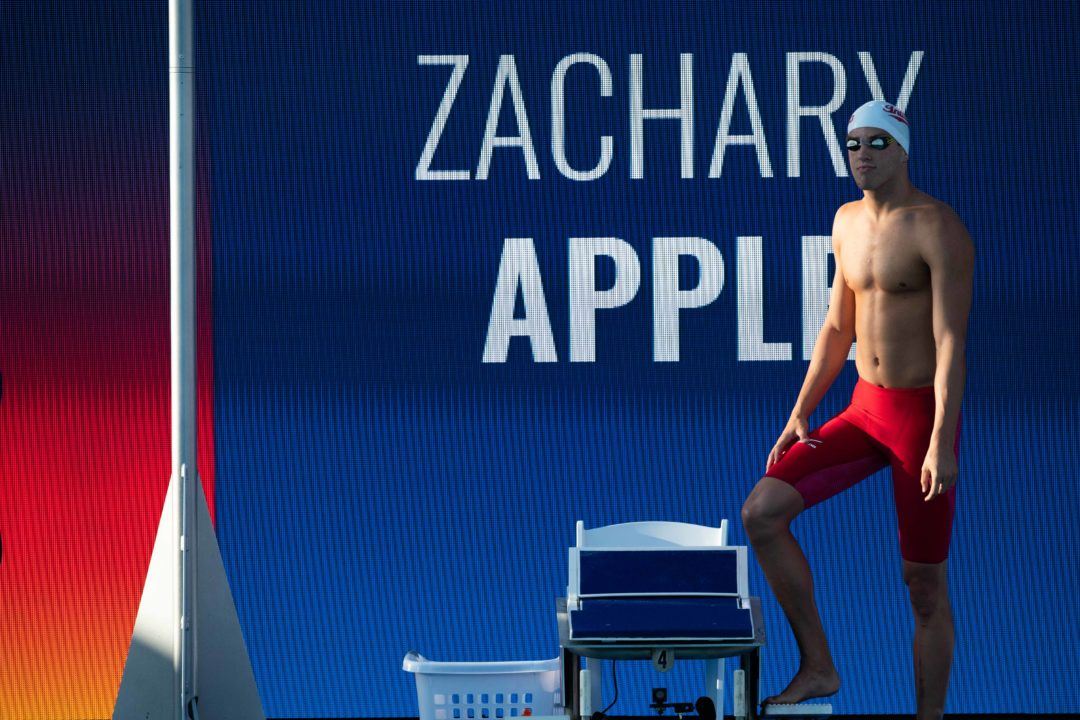 The USA men came through with a new Championship Record in the 400 Free Relay on the first night of finals at the 2019 FINA World Championships. Caeleb Dressel, who first broke the American Record as the leadoff member of this relay in 2017, swam his fastest time since the last Worlds meet with a 47.63 to start. He handed off to Blake Pieroni, who held the lead in 47.49.

Their 3rd leg man, however, really brought the thunder. Zach Apple pulled the Americans further ahead with a huge 46.86 split. Nathan Adrian, the anchor staple of this relay over the last several years, then sealed the deal with a 47.08 split.

Apple’s split brings up an interesting possibility of whether he may be considered for the anchor position on the medley relay. With Dressel likely swimming the fly leg, he could be used on the prelims or finals relay in that spot. Pieroni is the other man slated to swim the individual 100 free here.

The coaches will have several men to choose from, as Adrian is also a possibility. He’s been consistently reliable as the USA’s anchor leg and was nearly sub-47 himself tonight. Apple, however, was over 6 tenths faster than Pieroni and had the fastest split of any man in the Worlds field tonight.

I would put Apple on the medley relay. Nothing personal, but 46.8 is too good.

I’d say Adrian in prelims and Apple in finals unless Pieroni throws down something big individually. Sure maybe both of them might not be able to replicate those with their second taper/recovery respectively, but the split difference over Pieroni is worth the risk.

He’s on fire no doubt. But Adrian is the master of the hold-em-off swim. That’s a totally different strategy than the we’re really close, or come from behind, and not necessarily the best for the fastest split. Plus, the psychological advantage to the team as a stabilizing force (Wilson a novice, Dressel erratic so far), and to psyche out opponents is immense. If you’re an anchor on another relay going up against Adrian, somewhere in your mind, you’re saying it’s over. If you’re going up against Zapple, you’re saying “Who?” and “I’ve got a chance.” Zapple is going to be insane come OTs.

Training with Coley has made a huge difference He has really ramped it up this past year.

Training with Pieroni is the difference. It’s why he’s staying there.

He doesn’t train with Coley, he trains with Mike Westphal

Why Mike is a distance coach? Dosent Mike coach Zane? So Zach trains with Zane? Coley is at Bama.

With all respect to Adrian, and unless Blake goes 47.2 individually I think you have to reward that swim by Apple. It is a week later, the medley, that’s a long time with no racing on a re-taper. Unless he wasn’t fully tapered in Naples.

If you play the “what if” game, the Americans can absolutely challenge the WR here next summer. You have Dressel who I still think has a 47.0 or faster lead off in him and then Apple and Adrian have been sub 47 rolling, then Farris was 47.08 in Naples and there’s a bunch of other guys that can go 47-mid to high and have another year to train.

Adrian, 10 years later and still on the relay. Incredible.

If his anchor leg and gold medal here doesn’t tug at your heart strings you aren’t a true swimming fan.

This is why the WC selection is too early. He clearly should have gotten the 100 individual spot over Dressel. lol

I get your take here, it’s in jest obviously, but I’m not opposed to what they did in terms of giving athletes two years of preparation where you know your schedule and what the plan is.

But I’d really think they would rather do that for the 1st cycle with worlds and panpacs and then give swimmers the year before Olympics a trials/worlds practice cycle.

I wonder how much swimmer/coach input they got on this.

Ok 47.6 was disappointing because his 50 fly time gave the indication that he was in even better shape them Budapest, where he went 47.2 leading off. 47.6 would still beat any other American, including zapple…

Great swim for Apple. But did anyone else think Dressel was going to lead off in a 46?

After that 50 Fly I was certain.

I didn’t, and I’m probably the only one on this site. He did look explosive in the 50 fly. I don’t think he’s rediscovered his 2017 level sprint free.

Are you going to spam every comment mentioning Dressel with your smug takes every time he doesn’t break a WR in a swim?

Pretty much. You don’t have to read them. It’s hilarious how this is the only pro sport for which disappointing swims of an overhyped pro have to be handled with age grouper kid gloves. Get over it.

lol. the fact that you classify a 47.6 leadoff as disappointing just shows how high the expectations are of him and how hard you want to hate him. get over yourself.

Speaking of relays, which two male Americans do you put on the 4×100 MIXED FREE RELAY? Dressel and whom? With C1, C2, and Chalmers, the Aussies are going to be a very tough challenge in that event.

Dressel and Adrian in the mixed free

Wasn’t Zapple a WKU commit before all of that went down?

Wild to think how far he’s come given his circumstances. Like you said, Braden, “his potential is mouth-watering,” but now his times/splits are too!