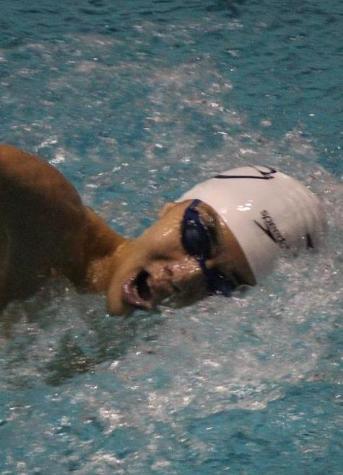 NEW HAVEN, Conn. – Yale men’s swimming and diving team defeats Columbia in a challenging meet at home on Nov. 12.  The two teams traded the point advantage throughout the meet, even tying in points after several events in the meet.  Coming down to the last two events, Yale managed to just barely take victory over Columbia, 152 – 148.

“Today was a hard fought win and one that we won’t be forgetting anytime soon,” said team captain Alex Goss. “Every time they picked up momentum, we snatched it right back. It was truly inspiring watching our team fight back against everything thrown at us.”

Starting off the meet, Yale took second and fourth in the 200-yard medley relay, a closely fought event.  Yale’s ‘A’ relay – junior Shawn Nee, Goss, junior Aaron Greenberg and freshman Henry Gaissert – took the lead during the breaststroke leg, but Columbia managed to rally in the freestyle leg and overtake Yale.

Junior Kei Hyogo continued to dominate the long-distance freestyle events.  In the 1000-yard freestyle, Hyogo took a quick lead at the beginning of the race, splitting the first 100 yards at 51.77, and continued building his momentum through the race. Finishing at an impressive 9:02.47, he dropped over 12 seconds from his last performance this season and was only four seconds off his personal best in the event.  Moreover, Hyogo’s time in the 1000-yard freestyle was the third fastest time in the nation as of Nov. 12.  Hyogo went on to take first in the 500-yard freestyle at 4:28.97 in a similar fashion.

Just behind Hyogo in the long-distance freestyle events, senior Ben Lerude staved off the Columbia swimmers, finishing runner-up in both the 500-yard and 1000-yard freestyle events.  In the 500-yard freestyle, Lerude pulled ahead around the middle of the race and just barely held on to his lead, edging out Columbia’s swimmer by three one-hundredths of a second in an exciting finish to touch at 4:31.07.  Freshman Christopher Miller rounded out the long-distance crew, finishing fifth in both events.

In a tight race separated by just tenths of seconds, Yale took second, third and fourth in the 200-yard freestyle.  Leading the Yale pack, Bole finished runner-up with a time of 1:38.58, barely out-touched by Columbia’s swimmer.  Following closely behind, junior Jonathan Rutter finished third with a time of 1:39.21 while sophomore Adrian Lin took fourth with a time of 1:39.73.

In the 200-yard butterfly, sophomore Joey Carbone grabbed the lead in the first 100 yards and held on to touch first at 1:51.71.  Just behind Carbone, freshman Duncan Lee finished runner-up with a time of 1:51.75.  Schultz rounded out the event with a fourth place finish and a time of 1:52.30.  Freshmen Ryan Huizingand Lee led the Yale butterfliers in the 100-yard butterfly.  Huizing touched third at 50.15, shaving over a second and a half from his last performance.  Lee followed closely behind in fourth with a time of 50.79.

The results of the 100-yard butterfly left the meet at an exact tie, 132 – 132, with the final outcome coming down to the last two events, the 200-yard individual medley and the 400-yard freestyle relay.

Starting off the 200-yard individual medley, Hyogo took an early lead in the butterfly leg, continuing to maintain his lead to finish first at 1:48.56.  Rutter, who was just behind Hyogo in the butterfly leg, fell back to third during the backstroke and breaststroke legs.  In an exciting finish, Rutter ran down Columbia’s swimmer in the final freestyle leg to finish runner-up at 1:51.50.  Hyogo’s and Rutter’s performances gave Yale a critical boost over Columbia with the total score at 146 – 137.

Since relay events score extra points, the meet came down to the final event, the 400-yard freestyle relay.  Yale decided to strategically “split” the ‘A’ and ‘B’ relays, placing Greenberg on the ‘B’ relay.  Yale’s ‘A’ relay started the event off well in the lead, but gradually Columbia’s ‘A’ relay managed to overtake Yale, which was to be expected.  With Columbia’s ‘A’ relay continually extending their lead, the outcome of the meet rested on Yale’s ‘B’ relay to finish ahead of Columbia’s ‘B’ relay.  Behind at the halfway point, Yale’s ‘B’ relay rallied in the last two legs to overtake Columbia’s ‘B’ relay, finishing third at 3:03.37.  The second place finish of the ‘A’ relay, who touched at 3:02.22, and the third place finish of the ‘B’ relay gave Yale enough points to take victory over Columbia.

“I’m really proud with the way we raced and competed today.  It is a testament to the work the guys have been putting in the weight room and the pool,” remarked Tim Wise, the Robert J. H. Kiphuth Director of Men’s Swimming and Diving.

“Columbia was as good as we expected them to be – we were very fortunate to come out on top.  Special thanks to all the alums who came out to support our program.  They definitely gave us a tremendous home pool advantage.”

With their second straight Ivy League win, the Bulldogs will travel to Virginia Tech in the upcoming week for an invitational.

New Haven, Conn. – High-level Ivy League action continued for the Columbia men’s swimming & diving team on Saturday, Nov. 12 as the Lions took on Yale in their home opener. In back-and-forth battle at Kiphuth Exhibition, the Bulldogs edged the Lions 152-148 with a push in the final events.

A record-setting performance on the boards by Jayden Pantel ignited the afternoon for the Lions. The junior tallied a first-place score of 410.70 in the three-meter dive to set a new program record and a Yale pool record in the event, becoming the first Lions to surpass the 400-point mark. Pantel bested his previous school record of 397.80 set last season in a dual-meet against Cornell (1/16/16). The victory also marked his 24th-straight win in the three-meter dive to remain unbeaten in his career in dual-meet action, including back-to-back 11-0 seasons in his rookie and sophomore campaigns.

He returned for a one-meter triumph to sweep the diving events on the day with a top score of 356.47. Shinya Kondo also placed third in the event for the Lions with a score of 283.50, along with Kevin Fulton in the three-meter dive with a tally of 294.60.

The 200 medley relay squad of Cole Stevens, Jae Park, Terry Li and Mark Gullickpicked up their second Ivy League victory of the season with a winning time of 1:30.97. First-year Nian-Guo Liu continues to shine for the Lions, as he picked up his second-consecutive conference win in the 200 freestyle with a time of 1:38.41. Michal Zyla added a 100 backstroke victory for the Lions with a first-place time of 49.81, edging runner-up teammate Cole Stevens who clocked in at 50.10.

Michal Zyla returned to give the Lions a huge spark in the 200 back with his second victory on the day. Zyla hit the wall with a first-place time of 1:46.64, followed by Cole Stevens in second-place at 1:50.55.

Despite a 400 freestyle relay victory in 2:59.54 by Li, Liu, Frifeldt and Gullick, the Bulldogs created a cushion with a top finishes in the 200 Individual Medley to hold off the Lions, 152-148.