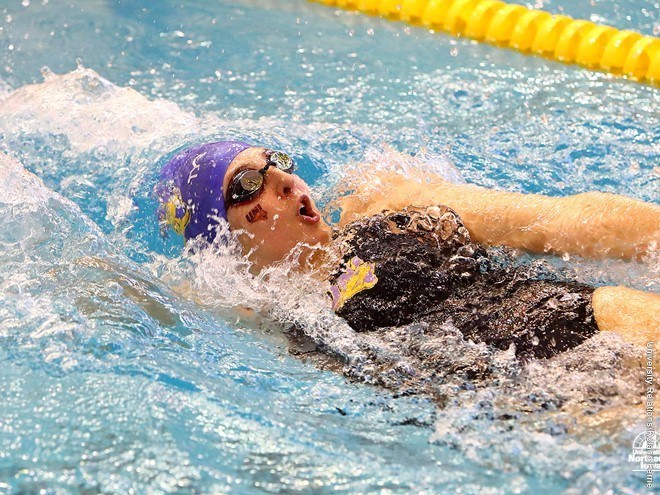 Ross led the Panthers in the 100 breaststroke, timing in at 1:05.59 for first place. Roepsch and Veronica Herrmann grabbed second and third places, with times of 1:07.22 and 1:07.47 respectively.

Lembezeder would grab two individual first place finishes in the 50 and 100 freestyles. Lembezeder had times of 24.39 and 52.55.

Katie Taylor continued her dominance in the pool, taking first place in the 100 backstroke with a time of 57.22. Sophomore Madison Rinaldi grabbed second place, timing in at 1:00.49

Taylor would grab first place in the 200 backstroke, timing in at 2:03.37. Taylor’s time was two seconds off the school record. Phyfe would nab second place, with a time of 2:12.17.

Ropesch grabbed third place in the 50 freestyle with a time of 25.23.

“We are making steps in the right direction,” commented head coach Doug Humphrey after the meet.

Sophomore Alyssa Deuso took first place in the 1-meter diving, scoring 218.92. With that score, Deuso tied her personal best for the Panthers. Hannah Brummel took third and Emma Billerbeck took fourth, with dives of 203.39 and 190.50.

NEXT TIME IN ACTION

The Jackrabbits dropped to 2-2 in duals this season and will compete Saturday afternoon at Summit League rival Omaha.

Spinner, a freshman from Prior Lake, Minnesota, claimed the 200-yard butterfly in 2 minutes, 10.66 seconds for the first Jackrabbit victory on the day, while Erf, a junior from Oakdlae, Minnesota, won the 100 butterfly in 58.00 seconds.

Spinner and Erf also made up half of the Jackrabbits’ runner-up 200 medley relay, teaming with Sam Prasher and Ashley Theobald for a time of 1:47.63. Erf also swam on SDSU’s other relay, team with Daniela Santillan Lahud, Gabby Langerud and Richelle Bruyckere for a second-place finish in the 200 freestyle relay with a time of 1:40.20.

Also for the Jackrabbits, Cassie Hendricks posted a pair of top-three finishes in individual events. She placed second in the 50 freestyle in 25.16 seconds and took third in 100 freestyle, 54.23 seconds.