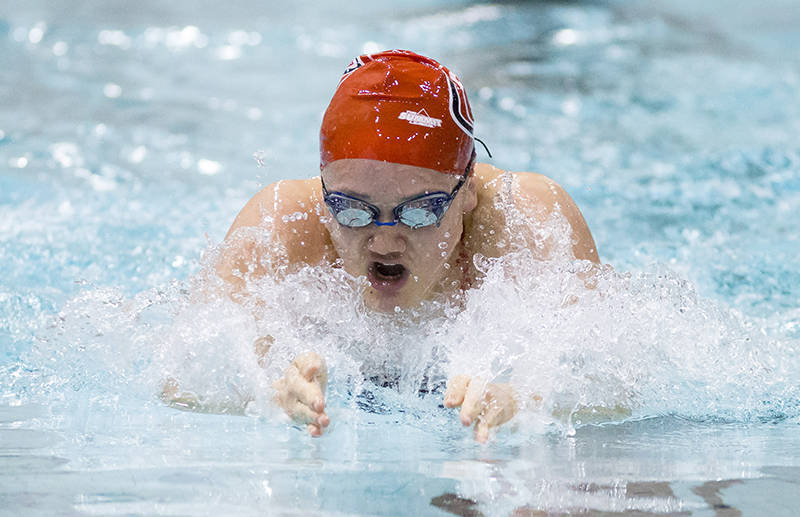 Junior Olivia McLain swam to multiple victories on the afternoon as well. She was victorious in the 100 free, securing a season-best time of 53.47, then added another season-low time in the 100 fly (57.35).

Freshman Andrea Brosnahan continued her impressive inaugural campaign, dominating both the 3-meter and 1 meter dives. Brosnahan diced the competition, putting together season-best performances in the 3-meter (264.25) and the 1-meter (263.75).

Omaha returns to action on Dec. 1 for the first day of the Mutual of Omaha Invite. The event runs Dec. 1-3 at HPER Pool.

The team of Cassie Hendricks, Kristin Erf, Alexandra Spinner and Julia Bodnaruk finished first in the 400 medley relay in 4:00.69 for the first victory of the day. Erf also captured a first place win in the 100 and 200 breaststroke with times of 1:05.71 and 2:25.72, respectively.

Richelle Bruyckere claimed a first place victory in the 200 freestyle in 1:56.36, while Samantha Prasher finished first in the 100 backstroke in 59.72 seconds and Cassie Hendricks came in close behind with a time of 1:00.17.

Freshman Ashley Theobald captured the first place time in the 50 freestyle in 24.66 seconds.

Up Next
The Jacks travel to Minneapolis, Minnesota for the Jean Freeman Invitational Dec. 2-3.