Penn Men And Women Take Down Villanova On The Road 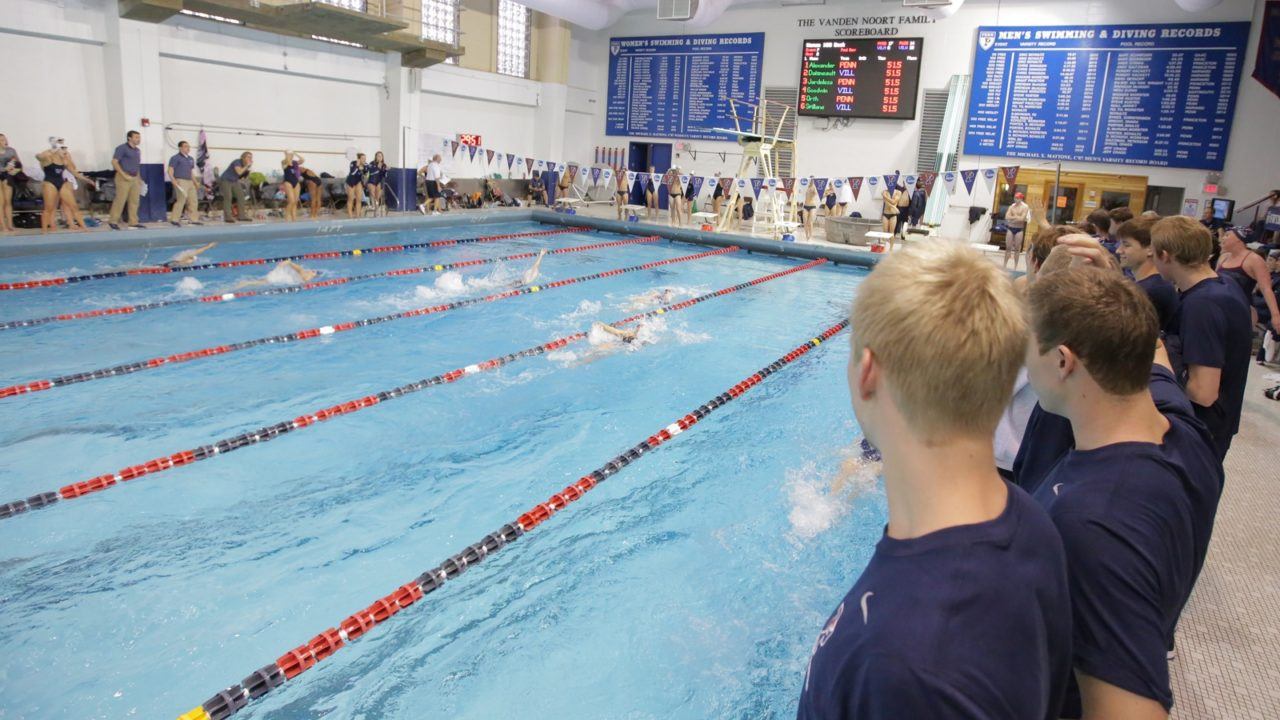 VILLANOVA, Pa. – The University of Pennsylvania men’s swimming and diving team put together a dominating performance on the road Saturday, taking down rival Villanova by a score of 176.50-118.50. The Quakers featured 11 total first-place finishes on the afternoon.
Kevin Su and CJ Schaffer led the way individually for the Red and Blue, both notching two first-place times. Su captured the top mark first in the 200-yd freestlye, edging freshman Jackson O’Dowd who came in second, with a time of 1:39.51. The California native also won the 100-yd free, heading a Quaker sweep with a time of 45.50. Jimmy Jameson and Austin Ryan followed in second and third.
Schaffer owned the breaststroke events for Penn, winning both the 100 and 200-yd races. The Quakers boasted the top-three performers in the 100-yd battle, led by Schaffer at 57.26, followed by Thomas Dillinger and Jordan Hurwitz. In the 200-yd race, the junior touched the wall at 2:05.81, besting Hurwitz who finished second.
The 1000-yd freestyle race was full of top-times for Penn, as Alex Peterson first finished with a mark of 9:30.20, while Matt Haigh and Taylor Uselis followed in second and third. Michael Wen and Jack Scott finished second and third in the 50-yd freestyle.
Jameson boasted a first-place time of his own in the 100-yd backstroke with a finish of 51.28, followed closely by Mark Blinstrub at 51.46, while Dillinger took the top time in the 200-yd back at 1:52.19. Penn’s best performance a butterfly race came from Hunter Brakovec, who won first in the 200-yd competition at 1:52.60.
Penn took home both first and second in the 200-yd medley relay, as the team of Jameson, Colin McHugh, Wen and Scott captured first at 1:31.86, while Schaffer, Hsing, Emilio DeSomma and Ryan were right behind with a time of 1:32.68.
On the diving board, John-Michael Diveris and Andrew Bologna traded first and second-place performances respectively, as Diveris won the 1-meter, while Bologna capture the three-meter.
The Quakers will compete in their first Ivy League tri-meet of the season next week, traveling to Ithaca, N.Y. to take on Cornell and Princeton Saturday, Nov. 19 at 11:00 a.m.

Villanova, Pa. – Despite a good showing in many events, the Villanova swimming and diving teams were edged by Penn in a dual meet on Saturday at the Pavilion.

Villanova got off to a strong start in the diving events, which kicked off the meet. Brighid Dunn took the top spots in the women’s one and three meter dives with scores of 236.25 and 241.20, respectively, and Michael Perra claimed third place in the men’s one meter and three meter dives.

The swimming portion of the meet began with the women’s 200-yard medley relay. Villanova’s team of Darby Goodwin, Brooke Bruno, Mackenzie Niness and Taylor Wilson finished in second place with a time of 1:45.95, just .83 seconds behind first place.

Goodwin and Wilson captured the top spots in the women’s 100-yard backstroke and 100-yard free, respectively, while Bruno earned points for the team with third place finishes in the 100-yard and 200-yard breaststroke.

Goodwin also won the 200-yard backstroke, and teammate Kathleen Miszkiewicz finished right behind her to take second place honors in the event.

Hoin won the 50-yard free as an individual at 21.55, while Cucchi took second place in the 200-yard backstroke. Cucchi also earned points for the team in the 100-yard back with a third place finish. Nussbaum helped the team score with a top three finish in the 200-yard breaststroke.

After a few days off, the Wildcats will be back in action at the Hokie Invite from Nov. 17-19.