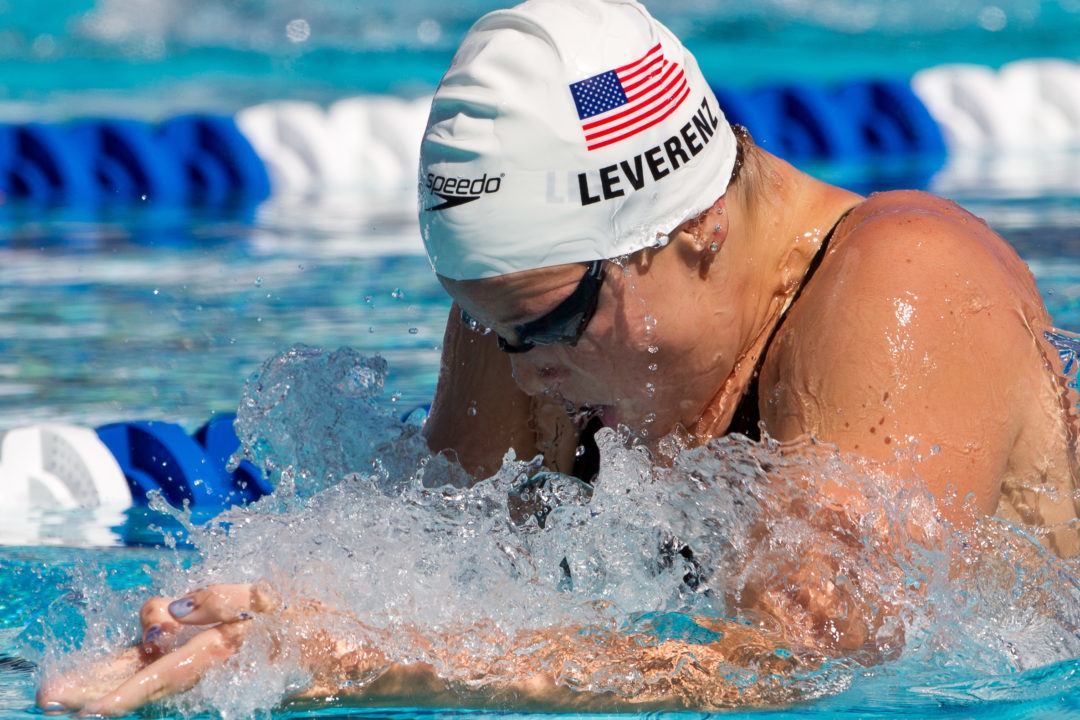 2012 Olympic bronze medalist Caitlin Leverenz is a favorite to win the 200 IM at 2016 Olympic Trials, but she will face serious competition on the road to Rio. Archive photo via Tim Binning/TheSwimPictures.com

The United States has not won an Olympic gold medal in the 200 IM since Tracy Caulkins’ win at the 1984 Los Angeles Olympic Games. This year’s field at the 2016 US Olympic Trials is shaping up to be one of the strongest yet, with many of the top swimmers looking for a spot on the US Olympic Team and a chance to end the 200 IM gold medal drought.

Stanford University’s Maya Dirado comes in with the top time so far in the qualification cycle with a 2:08.99, over a full second ahead of the second seed. Dirado posted this time at 2015 World Championships in Kazan, where she finished 4th in the event overall. After disappointing finishes at Olympic Trials in 2012, Dirado is a favorite in the 200 IM and she has already proven that she is prepared to challenge the top athletes in the world in this event.

Behind Dirado is Melanie Margalis of St. Petersburg Aquatics. She comes in as the second seed, though her time of 2:10.20 was posted almost two years ago at 2014 Summer Nationals. Margalis is certainly a contender for the Olympic team in the 200 IM after making the World Championship team in this event in 2015 where she placed 7th overall. The biggest threat to top-seeded Dirado will come from 2012 Olympic bronze medalist in the 200 IM, Caitlin Leverenz. Of the top seeds in the 200 IM field, Leverenz has the most international meet experience and has shown that she can perform under pressure, posting best times when it matters. Expect Leverenz to challenge Dirado for the win at Olympic Trials this summer.

Melanie Margalis in the prelims of the 200 IM in Mesa, Arizona (photo: Mike Lewis)

A relative newcomer to the international swimming scene, Madisyn Cox posted the fourth fastest time coming into Olympic Trials last summer at 2015 US National Championships. Cox won silver in the 200 IM at the 2015 World University Games, her first international competition. Another newcomer joining Cox will be Meghan Small, silver medalist in the 200 IM at 2015 Pan American Games. Though Cox and Small lack the international meet experience of Dirado and Leverenz, there are always a few breakout swims at Olympic Trials (think 2012 Katie Ledecky) and these two have the potential, based on recent performances, to challenge the top seeds.

Coming off of a stellar college season, Stanford’s Ella Eastin is a top seed in the 200 IM at Olympic Trials and will be a serious contender for a spot on the Olympic Team. Eastin set the American record in the 200 IM SCY at NCAAs in March and is the youngest woman to break 4:00 in the 400 IM SCY. If she can continue this momentum and focus on LCM training heading into Olympic Trials, Eastin will certainly drop time and have a top performance. Kathleen Baker, finalist at 2015 World Championships in the 100 back, will face off with the top swimmers in the 200 IM at Olympic Trials, as well. Though her chances of making the Olympic team are certainly better in the 100 back, Baker finished 2nd behind Eastin at NCAAs in March in the 200 IM and has shown that she can convert her short course training during the school year into success in the long course season. Don’t count Baker out of the race in the 200 IM.

Ella Eastin racing the breast leg during the 200 IM/Tim Binning/TheSwimPictures.com

Filling out the field are Bethany Galat and Sarah Henry of Aggie Aquatics, as well as 2012 Olympian Elizabeth Beisel, who finished 5th in the 200 IM at 2012 Olympic Trials. These three swimmers, particularly Beisel, who is known to race well at big meets, will compete for a spot in finals at Olympic Trials.

While the field is strong, expect the race to come down to battle between Dirado and Leverenz. The group of young swimmers, Cox, Small, and Eastin, will certainly put pressure on the two favorites, but it will take some serious time drops for an upset.

Dark horse: Elizabeth Pelton finished 3rd at 2012 Olympic Trials in the 200 IM, had a few stellar season at Cal, and looked to be a favorite for the 2016 Olympic Team. But after taking time off to heal a broken hand in the fall of 2015, Pelton had a mediocre college season this past year. Though it is a long shot, if Pelton can get back to where she was before the injury, she could pressure the top seeds in the race.

I really do not see Leverenz all of sudden dropping 1.6 seconds, for a time she hasn’t gone in 4 years. But who knows, trials are crazy. Dirado is the only safe bet for me. Behind her I would Margalis and Eastin as the top contenders. Margalis has had a lot of stellar doubles at the areno pro series this year, so I would love to see her get the second spot. I know we talk about Ledecky all the time, but the more I see interviews with her in addition to how well Dirado and Eastin are doing, I am not that concerned about her going to Stanford anymore. More concerned that this is her prime and will lose… Read more »

I agree with your picks more than the authors!

I’m not sure what Leverenz has done in the past few years for you to think she can pull off a 2:08…

Pelton makes a comeback. You heard it here first.