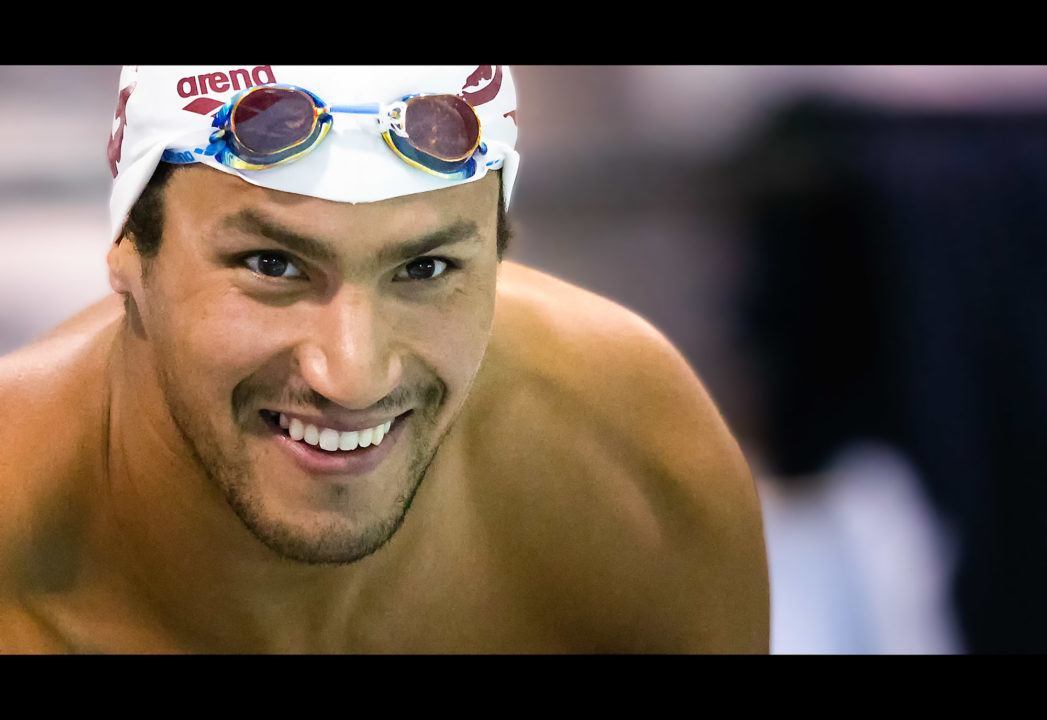 Ous Mellouli, the only swimmer to medal in both pool and open water events at the Olympics, is looking to compete in his fifth Olympics this summer in Rio. Archive photo via Tim Binning/TheSwimPictures.com

Tunisian swimmer Ous Mellouli won gold at the London 2012 Olympics in the 10k Open Water Marathon and bronze in the 1500, making Mellouli the first swimmer to medal in both open water and pool events in a single Olympics. Mellouli is looking for another gold in Rio, which will be his fifth Olympic Games. The 32-year-old will be competing in Setubal, Portugal at the 10k Open Water Olympic Qualifying Event this weekend (June 11-12), where the top 9 finishers will earn a spot to compete in Rio in August.

Courtesy of Tim Binning; Ous Mellouli is known for his incredible success in distance freestyle events.

Mellouli qualified for his first Olympics at age 16 in 2000 and has qualified for every Olympics since, though he did not earn his first medal until 2008 where he finished first in the 1500. In 2003, Mellouli left his training site in France to begin his freshman year at USC. As a 16-time All American and NCAA Champion, Mellouli saw incredible success at USC and continued to train with the Trojans as a post-grad through 2015, with some smaller stints at other clubs like NBAC.

Recently, though, Mellouli realized that it might be time to change up his training and reached out to Coach Bill Rose of Mission Viejo. Mellouli and Rose worked together at training camps throughout the years and when Mellouli was ready for a change, he contacted Rose about transitioning to training with the Nadadores going into Rio. According to Coach Rose, Mellouli joined the club at a mid-December training camp in Hawaii and has been training with the team since.

Coach Rose and the Mission Viejo Nadadores have a reputation for being a high quality club that produces many Olympians. Many think of the Nadadores as a “distance-focused” club, and in fact Mission Viejo has produced many successful distance swimmers, but it’s more than that. Coach Rose emphasizes that the club values more than just distance training, they value work ethic. “That focus on work ethic,” Rose said in an interview with SwimSwam, “is what made Ous’s transition so successful.”

Ask anyone about Mellouli’s training style and they will point out his incredible work ethic. He puts in the work day in and day out that makes it no surprise to anyone how successful Mellouli has been, especially later in his career. At 32, Mellouli will likely be competing in his fifth Olympics come August and his goal is to once again compete and medal in both pool and open water events. As Coach Rose explains, “Ous is competing in arguably the toughest races and he is significantly older than the relatively young field of athletes in these events.” Rose credits Mellouli’s tremendous work ethic for his success.

In April, Mellouli posted his best time since 2013 in the 1500 at the Fran Crippen Invitational and, if his recent success is any indication, Mellouli will likely be competing for gold in Rio. According to Rose, Mellouli is not sure what the future holds beyond the 2016 Rio Olympics, rather he is living in the present and using each meet as a decision about whether to compete in the next one. “Ous could stop swimming now and be content with his success in the sport, but he is making the decision as he goes,” Rose says.

One thing is for sure, Ous Mellouli will certainly be a contender for medals in both open water and swimming events in Rio, a feat impressive for anyone, but even more impressive for a 32-year-old, five-time Olympian. Mellouli is continuing to show the world that age doesn’t necessarily mean slower times and less success. Rather, Mellouli is a perfect example of what an impact focus and determination can have if someone is willing to put in the work.

Thank you to Mission Viejo coach Bill Rose for taking the time to share with us about Ous Mellouli’s transition from the Trojan Swim Club.

Would love to see Ous send Bill Rose out with an Olympic gold in the open water. From Bruner Crippen to Mellouli, Rose is the legend who never needed the hype but he deserves to go out on top.

Work ethic? Are you kdding me? What an one-sided article. Mr Mellouli cheated, used PEDs and was banned for 18 months. I doubt that he has been clean since then.

Clown comment. He took a greenie to stay awake all night to finish a term paper before catching a flight to an Orlando meet where he swam pre-season times. He was forthright about it, and frankly having a greenie in your system is not a performance enhancement the next day…if anything it is a lower than normal state.

I’m harsh on drug cheats who do it for a sports boost every time. This time, you’re way off. I know the narrative is cute to keep running with but you’re glad handing quite a spectacular misrepresentation.

Ous tested positive for Adderall.
Adderall and Ritalin is the most common drug of choice among NFL players because it is also a masking agent for steroid.

Whether we believe Ous’ narrative or not, that’s beside the point. He was banned retroactively for 18 months.

Should have stayed with Salo.